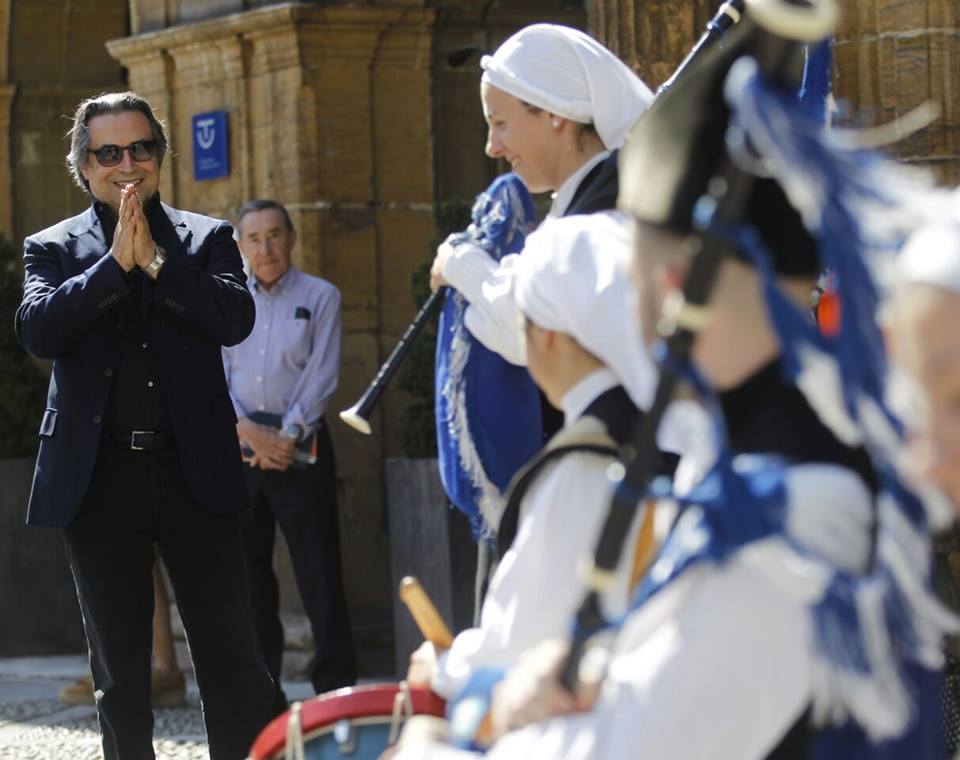 Muti greeted by a street band in Spain, similar to what Mahler imitates in the third movement of his First Symphony/Photo courtesy of www.RiccardoMutiMusic.com

Riccardo Muti began his Chicago Symphony Orchestra music directorship five years ago in the 2010-11 season, which included the centennial of the death of Gustav Mahler that spring. The CSO did plenty of Mahler symphonies that anniversary year, as would be expected. But Muti conducted none of them.

Instead, Muti chose to reconstruct the final concert that Mahler ever conducted a century before, which was with the New York Philharmonic: it happened to be a program of Italian composers who were contemporaries of Mahler. In fairness to Muti, it did end up being a fascinating program; but of course, it did beg the question of why Muti was not performing any of Mahler’s own music.

Shortly after my asking Muti that very question, an unlabeled package arrived containing an old CD of Muti conducting the Mahler First Symphony done with the Philadelphia Orchestra, recorded when Muti was music director there. It was revelatory on a number of levels, so lyrical, transparent and radiant was the playing. The rich strings sounded as if the piece had been recorded by the Vienna Philharmonic.

Of course, in offering thanks the next time I saw Muti, Mahler inevitably came up again. Since Muti can make Mahler sound so glorious, I wondered, why not do some here, given that he is the music director of what many consider the world’s greatest Mahler orchestra?

“Other than Mahler One and Four, which are shorter, I have some problems with the symphonies,” Muti confessed at the time. “Sometimes for ten minutes of paradise, you have twenty minutes of—well, something else, I don’t know what. With Bruckner, I find a world that speaks to me, but with Mahler, you must ‘feel’ him to do him. If not, no loss, as there are always so many young conductors who do Mahler because the loud finales will always get you lots of applause.”

Muti conducted the Mahler First as the season finale of the 2013-14 season, and there is no question that those sublime performances had an extraordinary impact on audiences, as well as on the myriads of critics who came to hear it while they were attending the Music Critics Association of North America convention which met in Chicago that year. No less significant was the impact the music itself had on Muti.

“Everything seemed new,” Muti admits. “It made a completely different perception. I went through my old CD [with the Philadelphia Orchestra] to have an impression of what my interpretation was at that time, but I started over. I ended up with six different scores because my idée fixe is not to trust critical editions. There was a mistake that I found concerning a tutti contrabassoon that several conductors, even here, fell into the trap of accepting.

“The last time I was in Vienna, I spoke to the librarian and found the first printed edition of the score that Mahler himself had used. Mahler had cancelled many things [reduced the orchestration] and made the piece lighter, but the second edition did not reflect this. The second performance using that first edition was by Weingartner, the third performance was by Richard Strauss. Then Bruno Walter did it on tour, before the last performance in Vienna in 1929, when Furtwängler used this score. Then a long silence, as Mahler was no longer performed during the Nazi time.

“I have discovered another thing about Mahler as we have studied this symphony: that his symphonic works clearly come from the opera house. I see this clearly now in a way I could not see thirty years ago before my twenty years at La Scala, so those thirty years have not been in vain! What is clear to me now is that Mahler is an operatic conductor, he is not Bruckner. He is somebody who spent most of his time in the pit of an opera house. And you can feel that in the music, particularly in terms of its tension and release.”

Muti made the decision to share his newfound love of Mahler as a gift to the entire city by making the Mahler First Symphony the centerpiece of this year’s 125th season-opening free weekend “Concert for Chicago” at Millennium Park, that will also include Beethoven’s “Leonore” Overture No. 3. Muti has also programmed the Mahler Fourth Symphony for next April.

Might Muti’s positive experience encourage him to look at other Mahler works that he has never done before? “Yes, I’m thinking about that now. Maybe in the past, I was so involved with other composers, and my impression was as I have said many times, for ten minutes of paradise, you have twenty minutes of nonsense. But maybe everybody has silly moments and perhaps at the end of my life, I may show up as a Mahler conductor! But I have a kind of nostalgia, it was always part of my personality, even more so now. It’s possible I have finally developed the personality for Mahler. Maybe I have waited so long to come closer to this composer.”