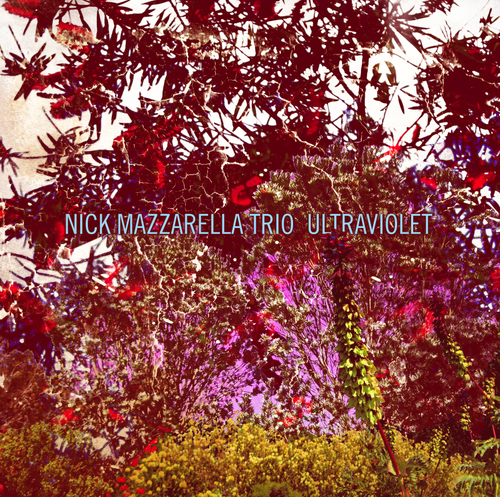 Chicagoan Nick Mazzarella plays alto sax with the kind of virile swagger that yanks you back through the decades to when this kind of strident, unsentimental sound split the whole goddamn twentieth century clean in two. It’s still surprisingly subversive to modern ears—which is why a lot of people run from this kind of fearlessly improvised jazz; it’s not safe—it’s here to challenge, not comfort. And on its new record, “Ultraviolet,” that’s exactly what Mazzarella’s trio does. The tunes were originally composed for a residency at the late, lamented Curio lounge in 2012, and they form a breathtaking free-jazz suite. All the titles relate to scientific inquiry—from the modern (“Neutron Star”) to the archaic (“Abacus and Astrolabe,” “Luminous Dials”), and from wave theory (the title cut) to paleontology (“Archaeopteryx,” “Fossil”). It’s a pretty clear indication that what these guys are about is straight-up investigation—of rhythm, of tone, of harmony—and that silos like classification aren’t going to get in their way.

The opening cut, “Neutron Star,” begins with Mazzarella’s irresistible, Eastern-sounding welcome-to-my-record riff, which immediately segues into a vigorous swing and an opening theme worthy of Coltrane. In his solo, he runs the scale with casual virtuosity, interpolating little phrases and quotes and rhythmic ideas along the way. Bassist Anton Hatwich responds with a sparer solo, no less dextrous but more reliant on repetition and open spaces, which defines his own persona—more introspective and reflective. In “Abacus and Astrolabe,” Hatwich and drummer Frank Rosaly start off circling each other like boxers in a ring, sizing each other up; then Mazzarella plunges in and initiates a gleeful free-for-all, with the players frenetically tumbling over and through each other. If there’s a winner it’s got to be Rosaly, whose rhythmic invulnerability functions like a steamroller; at one point you can almost hear Mazzarella’s sax cry “uncle”—after which he and Hatwich just get out of the way and let Rosaly own the bloody thing. Which he does with head-spinning virtuosity; Mazzarella and Hatwich have to creep back in by degrees—wary, but far from humbled.

“Luminous Dials” slows down and tones down, but without any concessions to balladry or romance; this is an atonal lament, with sax and bass moaning in dissonant tandem while percussion paces the floor and wrings its hands in the background. I shouldn’t find it beautiful but I do. The album’s title cut is an intricate, uptempo duet between sax and drums—less a conversation than Mazzarella speaking in tongues and Rosaly shouting “Testify!” On “Archaeopteryx,” Mazzarella begins with another infectious theme, which is soon joined by Rosaly’s Latin beating; it’s the friendliest cut on the record, as both Mazzarella and Hatwich hew pretty closely to the opening riff—exploring ideas in its immediate vicinity, but periodically scooting back in to touch base. At one point Mazzarella scores a sequence of flat-out keening that make the hairs on your nape stand up. The rest of the record has its surprises and delights as well; overall this is pretty heady stuff, audaciously conceived and thrillingly tackled. (Robert Rodi)

“Ultraviolet” is available for purchase or download on September 25, from the usual outlets and from International Anthem Recording’s Bandcamp page.