Estonian composer Arvo Pärt turned eighty last month, a milestone which has been celebrated across the music world during this anniversary year. In Chicago, Bella Voce has taken the lead in offering Pärt performances: his “Stabat Mater” last spring and this fall, his “Berliner Messe,” a 1990 work for vocalists and organ which Pärt later revised for string orchestra and chorus.

Bella Voce is no stranger to the music of Pärt, having been chosen by Pärt’s celebrated interpreter and subsequent biographer Paul Hillier to be the choir heard in the North American professional premiere of Pärt’s “St. John Passion”—better known by its short Latin title, “Passio”—back in 1990 when the group was still known as His Majestie’s Clerkes.

Hillier had worked with the group and was so impressed with its quality that he not only arranged for the then-Clerkes to perform the work alongside of his own Hilliard Ensemble and members of the Chicago Symphony Orchestra, but would go on to make a number of recordings with the Clerkes, some of which included music of Pärt.

“My wife, Kirsten Hedegaard, joined in 1993 when the group was already ten years old,” recalls Bella Voce artistic director Andrew Lewis, “and was on a number of those recordings. I joined in 1999.”

“Richard very much founded the group in the British style,” says Lewis. “He was keen on Renaissance music, but also on doing anthems and even things like Arnold Bax. The British approach is so much in our DNA, our whole approach to singing, the facility of sight reading and singing musically in the English cathedral tradition, still the way we see ourselves even though the name was changed in 2001 from His Majestie’s Clerkes to Bella Voce to reflect our broadening repertoire. That’s still our sound and approach of all the music we sing. It’s a very appropriate approach for Pärt’s music and one of the reasons Hillier wanted to have the Clerkes involved in that project.”

In addition to Paul Hillier, the Clerkes also were able to attract the attention of such prominent British choral conductors as Sir David Willcocks and Simon Preston who came to Chicago to work and perform with the group.

“Richard would latch on to these folks and talk them into coming. Paul brought in some contemporary repertoire and broadened the horizons of the group. A key moment was ‘Passio’ because the emphasis was no longer just old and traditional music, but new music as well. When Anne Heider became the artistic director, world premieres were commissioned and the group began to fully embrace that. We still do.” 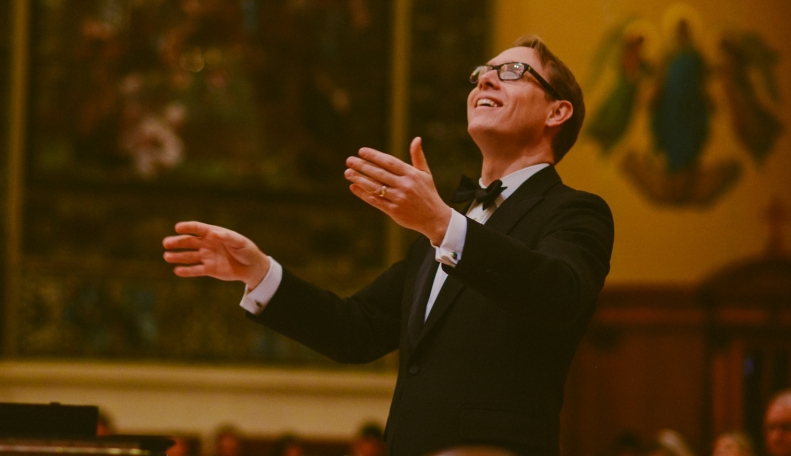 What Lewis finds fascinating about Pärt is his connection to Renaissance music and to the music of Bach. “There are some of the same quasi-isorhythmic compositional techniques that you would find in Franco-Flemish polyphony. There are stark differences outside, but inside they are very similar. During his years of silence, Pärt also studied Notre Dame organum.

“There were also period instrument performances going on in those years and that might have influenced Pärt’s interest in Bach. There is a minimalist aspect of Baroque music from the use of figured bass, the chaconne, any repeating structure. There is dynamic motion in between but the structure is actually quite static.”

Bach will also be featured on the program presenting Pärt, a motet and two smaller cantatas, all performed by the group’s smaller contingent of singers called the Bella Voce Camerata and a small string ensemble.

“There is an episode of Bach’s life that is often forgotten that after Bach’s parents died when he was ten, he moved in with his brother Johann Christoph, who was his first real composition teacher. The brother would keep his music locked up because of the Baroque attitude that the complexities of the universe and the mystical nature of life was contained in music and it was deemed inappropriate for a precocious ten-year old to even see what music could do. Bach would copy the music at night by candlelight which shows his industriousness, but also his craving to see the deeper meaning of music from an early age.

“Pärt seemed to separate the ego from the music and even ego from the compositional process not unlike what John Cage did with the ‘I Ching.’ It necessarily must be simple and seems completely transcendent. The music itself is clean and even. Even when it builds to a climax, it’s as if it’s coming from granite or the heavens like a monumental force rather than something that has something human to it. I hate to use the word because it’s so overused, but it’s sublime: massive and huge. Tiny little things going on that have these huge implications. That’s what makes it mystical; little tiny meditations on things that become the building blocks of the universe.”