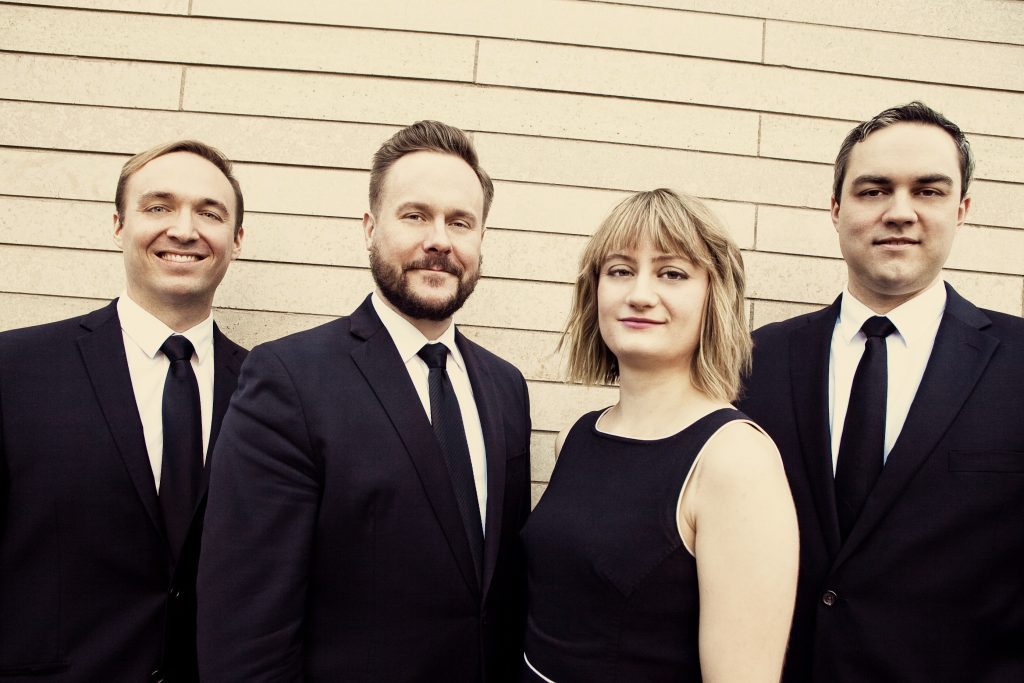 Like most current chamber ensembles, Chicago’s Spektral Quartet carefully anchors its programs of new music with pieces from the standard repertoire; the theory, I’m guessing, is that the players feel obliged to reward audience members for sitting patiently through difficult, dissonant modern works by offering them a familiar bit of Schubert or Schumann—the same way you’d toss a tasty biscuit to a dog who’s successfully held a sit-stay. But Spektral is better than most at conveying how those earlier pieces fit on the same continuum as the newer ones—often conjuring the sense of disorientation and even danger that their original audiences would have heard in them. For the opening of its new season, however, the Quartet is throwing itself an extra curve by adding a spatial element to its performance. A piece written for the group, Lee Weisert’s “Polychoron(b)” sends each member to a different corner of the hall, like misbehaving kids who need a timeout, “creating a surround-sound listening experience in this tightly-hocketed, geometrically-inspired work,” according to the press materials. They encircle the audience as well in another piece, Ryan Ingebritsen’s “4×4: 3 Birds,” but this time by means of a speaker system. According to the press release, “cells of music are layered improvisationally, filtered through Ingebritsen’s live electronics which bounce back changing patterns of delay to hypnotic effect,” and I confess my brain went cattywampus about halfway through that whopper of an explanation, so I’ll just have to experience it in real time to understand WTF. A final new work (which is also a world premiere), Morgan Krauss’ “the other is contained in the one,” gives each player a poem to interpret, and as the piece unfolds, the audience is encouraged to figure out which musician is working which set of verse. It all sounds very inventive and engaging; but by comparison, the pieces by Schubert and Beethoven that bookend the new stuff seem in peril of feeling rather too comfortable, and even John Cage’s “Quartet In Four Parts” might come off as quaint, which is a word exactly no one in human history ever thought to apply to John Cage. But we’ll see. Note: The following night, October 11, the Quartet performs the same program at Mana Contemporary, 2233 South Throop. (Robert Rodi)