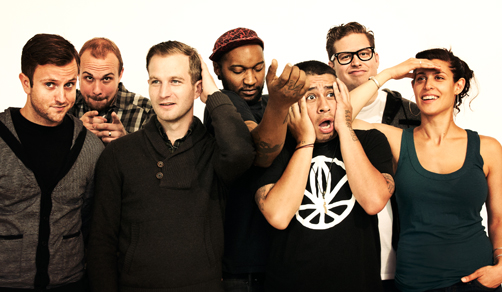 Doomtree, the best hip-hop collective since the Wu-Tang Clan, hails from Minnesota’s Twin Cities. Although until recently primarily known in hip-hop circles for being home to Rhymesayers, Atmosphere’s label, Doomtree is now celebrating more than ten years as a label, more than fifty releases, and the new record from their self-named septet, the aptly titled “All Hands.” Doomtree’s five MCs include Dessa, Sims, Mike Mictlan, P.O.S. and Cecil Otter; Lazerbeak is a producer and Paper Tiger DJs and produces as well. All seven members have released impressive solo work, but when they come together on record, every member is instrumental in fusing a cavalcade of seemingly disparate sounds. They don’t disappoint live, either; their round-robin, rapid-fire verse-spitting and propulsive, concussive beats were some of the highlights of this year’s Riot Fest in Chicago, and had the crowd hopping throughout. They’re back on December 4 at Concord Music Hall (2047 North Milwaukee); the all-ages show is at 6:30pm; tickets are $20. Lazerbeak has also collaborated with Joe Horton and Crescent Moon in the “supergroup” Mixed Blood Majority; their sophomore record, “Insane World,” has just dropped, and they’ll open the show along with fellow Minnesotan Bleubird.

The restlessness inherent in Tory Lanez’s music might be attributable to his itinerant upbringing. The rapper born Daystar Peterson was born in the Toronto suburb of Brampton of a Dutch mother (who died when he was eleven) and Asian/Barbadian father, and lived in Miami, Atlanta and New York City before moving back to Toronto and spending some of his teenage years living on the streets. He picked up the nickname “Lanez” in ATL after being observed to be a frequent non-observer of traffic customs and thus an inveterate jaywalker, whereas his Tory handle came from his love and emulation of his NYC inspiration, the Notorious B.I.G. The now twenty-three-year-old has been rapping since age nine, and performing live since he was sixteen, so don’t let his comparative youth fool you. His name first emerged after fellow Canadian Justin Bieber was “inspired by” and/or “borrowed” one of his verses in 2010, and he logged a lot of hours on tour with both the Beebs and Sean Kingston.  This summer he dropped an EP with LA collective WEDIDIT, had a single released described as a “legitimate hit” in the press in the form of “Say It,” and collaborated on a new single with Meek Mill. He describes his music as “swavey,” meaning a unique fusion of hip-hop and other genres, fulfilling his moniker as someone who easily runs across many “lanez.”  Boogie is opening on the leg of this tour that takes him to Reggies’ Rock Club (2105 South State) on December 5. The all-ages show starts at 5:30pm, admission is $17 ($22 DOS).

The same night a more seasoned, more mature and more traditional hip-hop and R&B solo artist will take the stage at The Shrine (2109 South Wabash). Ryan Leslie is now thirty-seven, but he was also a young prodigy raised by parents with a similarly nomadic mobility. Leslie’s parents were both officers in the Christian charity The Salvation Army and planned to move again when he was fourteen, but rather than transfer to his fifth high school, he took his SATs, got a perfect 1600 and ended up graduating from Harvard at age nineteen. R-Les never had a piano lesson either, but he taught himself how to play and made his name early on as a  producer, becoming a protégé of Sean “P. Diddy” Combs and himself discovering and partnering with Cassie Ventura. R-Les may not have the lyrical creativity and rapid flow of Tory Lanez, but he boasts legitimate musical composition and production skills, so the sounds he crafts typically overcome the tired clichés and braggadocio about his rap skills and his lifestyle filled with high-life living covered in gold chains and top dollar sports cars. His Harvard education has paid off in terms of his innovative approach to the business; he now sells his music directly to his fans, including the “first lifetime concept album,” “MZRT.LIFE,” featuring twelve tracks that came out in 2015. He’s also releasing a new song each month as long as he continues to record, to be sold on a subscription model. The show is twenty-one-plus and starts at 10:30pm; standing-room tickets are $25-$32.50; table bookings are also available; see the Shrine’s website.