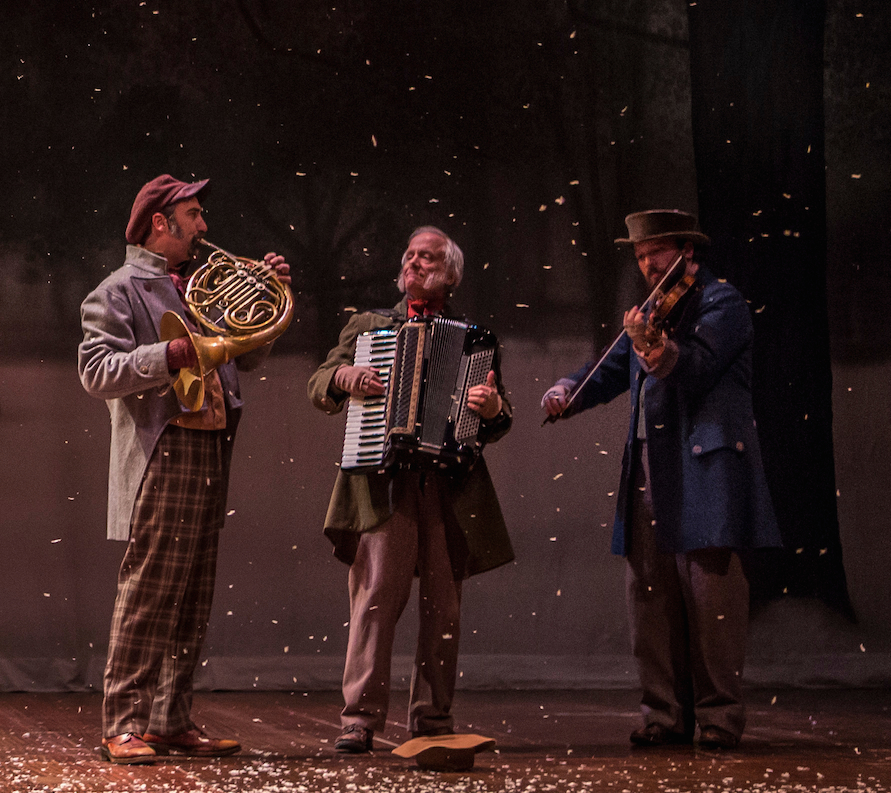 This is Justin Amolsch’s thirteenth season in the Goodman Theatre’s annual production of “A Christmas Carol.” Since the show has been running since 1978, that means he’s been part of it for more than a third of its lifespan; and he is, additionally, the show’s longest-serving active cast member.

And he is indeed a cast member, although his role is “Musician, French Horn.” In any other show, the players are offstage, but Goodman integrates their orchestra of four—in addition to Amolsch, there’s Madeline Ruhl on flute, Andrew Coil on violin, and Malcolm Ruhl (who’s also the music director) on accordion—into the play’s action. They move about the stage, providing both musical commentary and strategic cover when required (as to mask the noise of stage machinery, or distract attention from a cast member changing costume upstage). Amolsch recalls the first time he was given a solo cross. He’s a career musician—a member of Mucca Pazza, The Congregation, and a few other bands—but he’d never been in a theatrical production before. “I didn’t think I’d make it all the way across the stage,” he says. But his knees held out; and the next night it was easier—and now, having worked with four directors and enough actors to colonize a small Aegean island, Amolsch has more stage experience than a lot of professional thespians in this town.

As cast members, the musicians are put into period dress; beyond that, Amolsch is required to grow out his facial hair. Fortunately, he has one of the thickest and shapeliest beards I’ve ever seen—we’re talking Civil War general, here—so in addition to the music, he brings the show a fair amount of Victorian verisimilitude.

The current production features music by composer Andrew Hansen; in addition, the other players are asked to provide extemporaneous music to facilitate certain scenes, which they work out among themselves. “So it’s the best of both worlds,” Amolsch says; “we get Andy’s written score, but we also get to improvise.” The ensemble tries to keep all its own additions faithful to the period, which requires a working knowledge of the nineteenth-century pop scene.

But there’s plenty of time to bone up on that, as production for the show begins months before the first previews in November. “Basically, as soon as one year’s show closes, they start planning the next,” Amolsch says. Rehearsals for the show—which features a cast of twenty-five and a number of complex set pieces—can commence as early as September.

And then there’s the schedule during the run, which is punishing by anyone’s standard. “It can be a little difficult to have your own Christmas, when you’re playing ten shows a week,” says Amolsch. “You think maybe you can run over to a department store during a break and do a little shopping—but it’s never as easy as that,” which is a clear reference to the fall-of-Saigon atmosphere that takes over the Loop retail district in December. But with thirteen seasons at his back, it’s pretty clear that the Goodman’s “A Christmas Carol” now is Amolsch’s holiday tradition. (Robert Rodi)