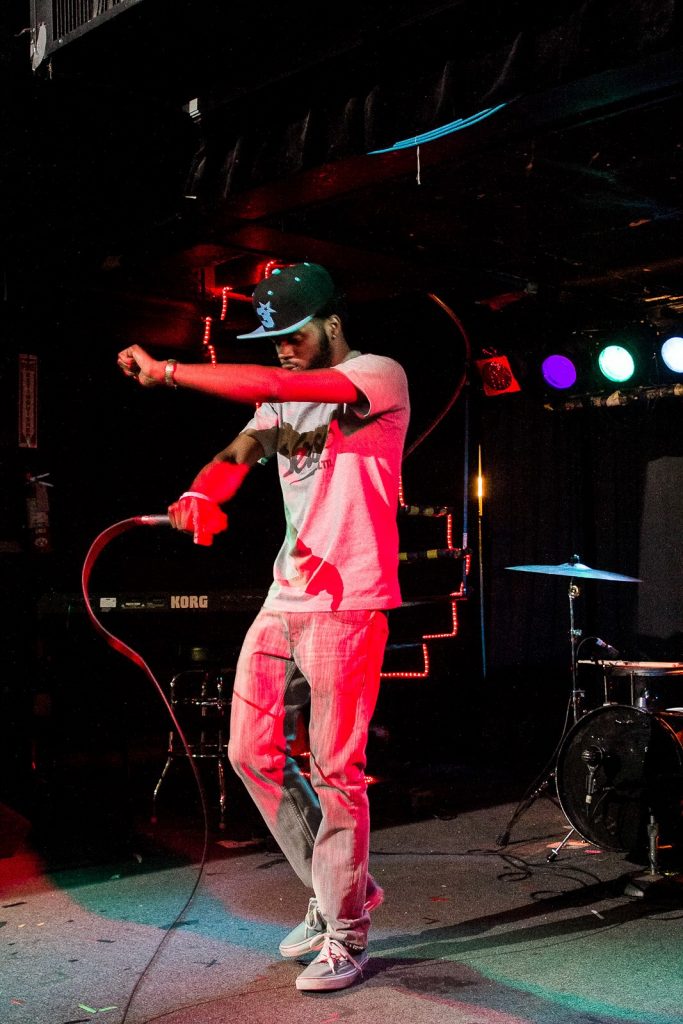 West Side product Roosevelt Sledge, Jr. goes by R.O.E. (pronounced Roe), an acronym for Rising Over Envy, but he’s risen over a lot more. Since his 2011 debut EP, “A Backpacker Named R.O.E.,” he’s toured to tout his intelligent brand of alternative hip-hop, recorded an incredible live album with his band The Soulvillians at Double Door… and his 2014 EP was either a toast “To Happiness” or described his journey there.

That sojourn toward happiness has included recently relocating to New York to better connect with music-industry resources and expand his horizons. R.O.E. says “it’s a mix” of music bringing him to NYC and also wanting “to experience life outside of Chicago.” He says he’ll probably live here again, but plans on developing his career and “building up Chicago” from his new base.

Nowadays he calls Brooklyn’s Bedford-Stuyvesant home, a neighborhood that has produced a “who’s who” of hip-hop, including The Notorious B.I.G. and Jay Z. “Growing up in Chicago, you knew that New York was where it all started,” he says. “You knew there was going to be a different level of appreciation for hip-hop because it started here… You think about the MCs that come from Bed-Stuy, you think about Big and Jay—I live three blocks from where Jay grew up… you feel the spirit of hip-hop when you walk through New York.” He also loves being “the new guy,” saying he’s been welcomed with open arms and he’s been able to showcase “what Chicago has raised me to be as an MC.”

R.O.E. grew up in a musical family, and aside from hip-hop cites jazz and soul singers as inspirations. Regarding other hip-hop heroes, he points to the grind and hustle of Ryan Leslie, fellow Chicagoans Lupe Fiasco and Common, mainstream rappers like Nas and J. Cole and underground artists like Black Milk and Oddisee.

Having grown up in the Austin neighborhood in Chicago—a city he loves but believes is highly segregated—moving to Bed-Stuy was a radical transition for R.O.E., starting with unloading on moving day. “That was the first taste of culture shock… in Chicago we know where certain ethnicities reside.” In stark contrast, he continues, “On my block and even in my building, there’s any race you can possibly think of.” He recalls telling his uncle, “Man I’ve never seen this before—this person would not be walking down the block where I grew up in Chicago. Not only would they not be over there, but they probably wouldn’t feel safe… even if you flipped the coin and, for me to be in the suburbs… being an inner-city kid, even that [could be] a shock.” New York’s seamless racial synthesis makes him wonder aloud, “Why can’t Chicago be like that? Why does it have to be so divided?”

He believes that segregation in Chicago is one-hundred percent to blame for the gun violence that’s been making the national news. “It’s tough to see a city as great as Chicago be labeled as this ‘murder capital’… there’s so much, not only political corruption, but distance between the politicians and the people. It’s not just the police brutality or the police killing innocent blacks or whatever the situation. Even in my own community I want people to understand: ‘Yo, we gotta respect us first, we gotta stop killing us first before anyone else can see and respect us in that light and then stop causing this violence toward us.’”

He boils it down to this: “There’s a huge distinction between the people and the politicians and there’s no way that they can find a common ground because the one doesn’t understand the other, so it’s hard to find ‘a resolve’ because no one wants to take blame for the issues, regardless of what side you’re on.”

“It definitely pains me,” R.O.E. confesses—so much so that he’s currently writing a song addressing this topic, triggered by the Tamir Rice case in Cleveland. “How many young black men and women have to be murdered by the police before we finally get some justice? I have a platform now and I’m going to use my voice to share with the world what I think about this… that’s the only way I know how. I’m a music artist—I’m not a politician, I’m not a police officer, I’m not an activist. So how do I show my thought processes? Through song… giving people my true thoughts, opinions and feelings and sharing my emotions with people in sixteen bars.”

Since moving east, R.O.E. has been working on his first full-length album, and has plans to put out more EPs too. “There’s going to be a lot of new music dropping soon, so I’m very excited about that.”