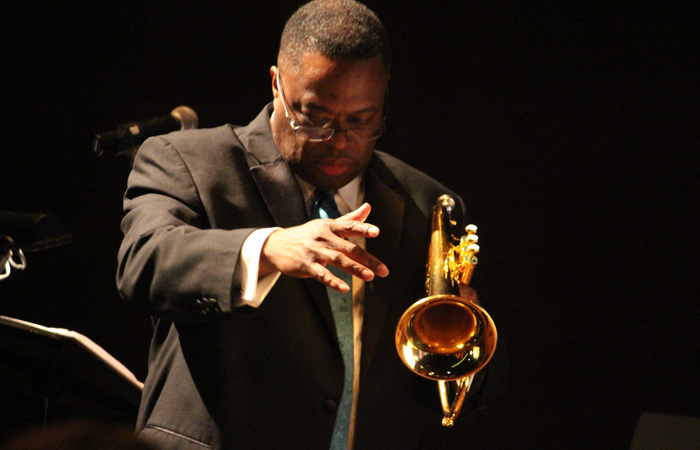 Chicago’s origins and present, along with a festival’s rebirth, are celebrated by the South Side Jazz Coalition on January 16. That’s when Orbert Davis’ Chicago Jazz Philharmonic (CJP) performs the score to “DuSable to Obama: Chicago’s Black Metropolis,” a documentary that first aired on WTTW in 2010 and won an Emmy Award. The Coalition’s second fundraising event is designed to raise funds for revitalizing the annual South Shore Jazz Festival, a thirty-one-year ritual that ended in 2012.

Now that the Coalition’s nonprofit status has been secured, it is attracting sponsors, determining a date, securing a lakefront location and selecting musicians for the revived festival, according to Coalition board member Margaret Murphy-Webb. This effort, she added, has been endorsed by Geraldine de Haas—the festival’s founder who, in 2013, relocated to the East Coast with her husband for health reasons—and surrounding communities.

“We expected 150 people at our first fundraiser, held last summer at the Quarry [in South Shore],” Murphy-Webb says. “We seated 180, and a total of 240 people showed up. This event on the sixteenth will seat 500, and we are urging people to get tickets early, because we don’t want to turn anybody away.”

Reviving the South Shore Jazz Festival is crucial, Davis believes, as it represented de Haas’ deep devotion to jazz music and displayed community togetherness at its best. “Geraldine de Haas provided the model for all Chicago music festivals when she presented the Duke Ellington Festival in 1974,” he says. “That was Chicago’s first jazz festival. Her vision was right on point, and more than any festival I have played, there was always a sense of intimacy between the people on stage and the audience.”

The trumpeter and bandleader, who also composed the score for “DuSable to Obama,” adds, “What I loved most about this festival is that Ms. de Haas attracted national acts and always had room for young, up-and-coming talent from Chicago. She was the first to take a risk with my double quartet with strings.”

This upcoming performance will be the fourth time the CJP has presented “DuSable to Obama.” (It premiered February 16, 2013, at the University of Chicago’s Logan Center.) Featured performers will include saxophonist Ari Brown, who has played with Davis since the early nineties, and vocalist Maggie Brown, who will deliver her take on Langston Hughes’ poem, “Will V-Day be Me-Day, Too?” during the segment, “The Segregated War,” as well as a poem by Gwendolyn Brooks. Davis selected her because of her ingrained knowledge and appreciation of the written word, which comes directly from her father, the late griot, singer and lyricist Oscar Brown Jr.

“DuSable to Obama,” Davis explained, explores how black people and black music evolved in Chicago. “I play a smeary, sultry, sexy blues for Willa Brown (on ‘Blues in Flight’), as I just had to write something extremely glamorous for this aviator,” Davis says. “The blues also finds its way in a laid-back sense, when we talk about the West Side, and it finds itself right before Curtis Mayfield. The entire piece ends with a blues for President Obama. There’s this sense of the blues and how we, as Chicagoans, identify with the blues.”

“DuSable to Obama (Main Theme),” the work’s opener, illustrates how the two men in its title encompass Chicago’s history, from Jean Baptiste Point DuSable’s roots to the President’s African ancestry. “Once I got that in my mind, the African side and all the heroes, I thought: African… hero,” Davis explains. “I also watched about thirty hours of Barack Obama’s speeches, with the sound up and the sound down, because I wanted the music to be a soundtrack to his character.” The songs Davis composed for the 1960s, which he entitled “60’s Heat,” combine the musical triumphs made in 1959 by Miles Davis, Ella Fitzgerald and John Coltrane with the racial rancor and riots happening in America’s streets and society.

“We really play our hearts out in a very avant-garde way. Within this orchestra there are so many colors. We are able to draw those orchestral colors; it’s not just about the groove or the improvisation. Those colors tap into our emotions.” Davis will conduct the ensemble while a single TV monitor plays the documentary to the musicians. “We will break all limits, because there will be no constraints. When improvising, it’s all soul. It’s soul music.”