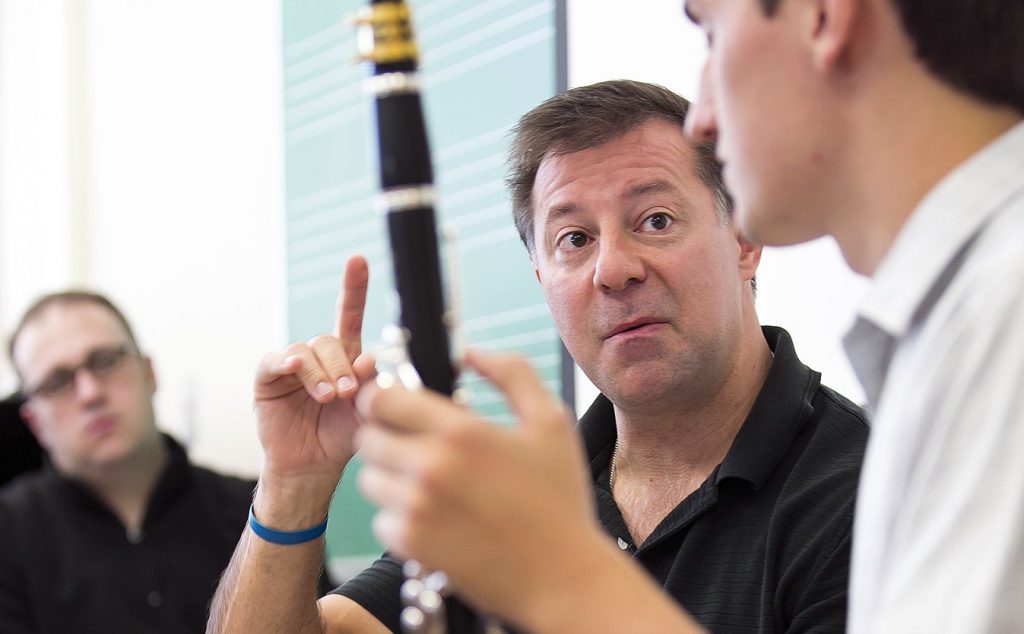 “Honestly, I felt like I was being shot out of a cannon,” says Chicago Symphony Orchestra principal clarinetist Stephen Williamson of the day he unexpectedly landed the job. “There had been four years of auditions and the position was still vacant. I was at the Metropolitan Opera Orchestra and was being asked every time, ‘Please, will you come?’ My wife and I struggled with it and I told her, ‘They’re not finding anybody. I feel I need to go out there and to at least say that I tried, that I represented myself.’

“When I finally came to Chicago, I wasn’t expecting anything. All I was hoping was that I would have an opportunity to be invited to play a week with the orchestra and then, whatever happens, happens. And I could say that at least I got to play with the Chicago Symphony and that it was a great experience.”

What Williamson never expected was for music director Riccardo Muti and the audition committee to offer him the position on the spot immediately after he had concluded his audition. “I really was shocked. They did it so early in the morning because I had to fly back to do a ‘Die Walküre’ performance with Maestro [James] Levine. I was elated, but in shock, because I had to go back to my music director at the Met, play that same night and say, ‘By the way, something just happened.’ The news was already at the Met before I even showed up off the plane. Maestro Levine had requested to see me at intermission.”

Levine had been the music director of Ravinia Festival for twenty-two years and knew the CSO well. “He was very supportive,” says Williamson. “He loves the Chicago Symphony and he loves the area. He even made suggestions about where my family and I should settle.”

Williamson had barely arrived in Chicago when the news came that legendary New York Philharmonic principal clarinetist Stanley Drucker was retiring after sixty years. “I went to Juilliard, New York became my home: Stanley Drucker used to ask me to sub with the New York Philharmonic before I went to the Met. I have enormous reverence for him. To have both of these positions open up around the same time was a mind-boggling experience. But I have to say, I kept continually soul searching. And I was in contact with Maestro [Muti] quite a bit through the process. The first thing he would always say, ‘You must do what is right for you as an artist and what is best for your family.’ He was so supportive. He never once told me, ‘No, you should not go to the New York Philharmonic.’ Or, ‘You shouldn’t stay there.’ He was always so understanding and accepting. That was so telling to me.”

“For me, personally, there is more room for me to grow within this organization. Because we check our egos at the door, we as an orchestra are more uniform and collaborative in giving something much greater than ourselves as individuals. It’s exceptional. It’s an extraordinary place to make music. When you find a place like that, even if I didn’t want to live in Chicago—which is not the case—I certainly felt it is so magnetic that I could not stop. The artist inside of me just had to come back. There was no other way.”

As a testament to Williamson’s permanent return to the CSO chair that he says he really now feels is truly his own, he will be performing the Mozart Clarinet Concerto with Muti and the CSO. “He definitely mentioned to me that that was, first and foremost, the piece he wanted to do with me. Of course, once my jaw came off the floor, I was able to respond with, ‘Of course, let’s do it.’ It’s been a little while coming. It’s definitely the jewel, the pinnacle of concertos for the clarinet, and one of Mozart’s greatest concertos. As exciting as it is, it’s also daunting. You never really quite ‘get it.’ It’s just so great. Every day of our lives as a musician, we’re still constantly trying not to get in the way of expressing Mozart’s lyricism: simple long lines. That is actually one of the most difficult things to do.”

Functioning as a “warm-up” for the Mozart Clarinet Concerto performances, Williamson will also perform the Mozart Clarinet Quintet with a group of students from the Music Institute of Chicago to celebrate its tenth anniversary. “I usually do it with pre-formed string quartets. Honestly, most of the time I’m coaching a student group, so I’ve never really worked with young students on this piece. I always feel when you’re an active performer in a chamber ensemble, it’s not a teacher-student relationship. And I don’t think it should be. I feel like I want to be as open to them as they would be to me, and I am looking forward to learning something from them.”