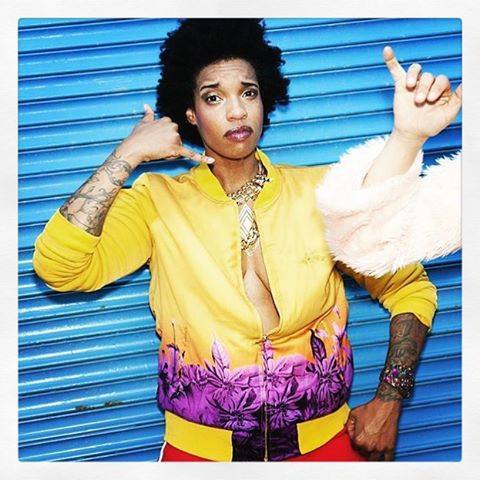 Psalm One and Awdazcate host the eighth annual Dre Day at Double Door (1572 North Milwaukee) on February 19; it’s a celebration of Dr. Dre’s birthday and his music. Andre Young made the beats that put gangsta rap on the map with N.W.A. and has gone on to produce a veritable who’s who of rappers, as well as his own music, most influentially, “The Chronic.”

Psalm One, born Cristalle Bowen, and who also raps under the alter-alter-ego of Hologram Kizzie, is looking forward to Dre Day again this year. She describes Dr. Dre as “quite influential in music as a whole, because before him I don’t think producers were so adamant about good mixing, good arrangements, good production… Rap has come from very humble beginnings,” she continues, “where you literally take the breaks from a disco record, sample that and loop that and that would be the blueprint… Dr. Dre changed all of that in the eighties and nineties.” Psalm One says she thinks he “might be the best hip-hop producer of all time,” but she’s not big on absolutes.

Of course, as both a woman and a hip-hop artist, Psalm One acknowledges that Dr. Dre’s history of female relationships makes things complicated. He was convicted of beating up Dee Barnes in 1991, his collaborator Michel’le Toussaint claimed he broke her nose and ribs when they were a couple and former label mate Tairrie B accused him of assaulting her at a post-Grammy party in 1990.

Psalm One says “it’s very challenging sometimes to like someone’s music and understand behind closed doors they’re doing things that are just reprehensible… I don’t condone it, I think it’s deplorable, [but] it doesn’t change the fact that he’s one of the best hip-hop producers of all time.”

She goes on to say that if you really enjoy the music, you have to separate the two. Conversely, she hasn’t been able to do the same for most music that comes from her former label, Rhymesayers, who released her 2006 album, “The Death of Frequent Flyer.” “Once I met some of my local indie heroes and started to work with them, and understood what they were about,” she says, “I can’t listen to any of their music anymore… just because I know what these people are really like, you know?” Although Psalm One used to be the “first lady of Rhymesayers”—famously the first female rapper signed to the seminal Minneapolis hip-hop label that’s also home to Atmosphere, MF Doom and Aesop Rock, among many others—she effectively severed any relationship with the label last fall. Just before the Rhymesayers’ twentieth anniversary concert in December 2015, an interview was published in a local alternative newsweekly in which she publicly called out the lack of female representation on the bill and alleged she had been invited to participate but, despite repeated inquiries, she only learned she wouldn’t be on the bill after the lineup was announced. The label’s head executive promptly posted a rebuttal saying that Psalm One was contacted prior to the lineup announcement (a claim that she refutes), but acknowledging that he would like the label to be more diverse gender-wise.

Following the release of “The Death of Frequent Flyer”, Psalm One was frustrated by not receiving any feedback from the label on her subsequent music. “Rhymesayers was really good for my career at the time. I still don’t feel they treat women as a whole fairly and because I’m a woman, I fall into that category of… I wouldn’t say mistreatment, I would say almost like a non-treatment.”

Today Psalm One seems ready to move on. RPRCHX and Bonafyde Media released “P.O.L.Y.” last September, the title of which stands for Psalm One Loves You and is inspired by her polyamorous orientation. It includes her most personal lyrics to date. The newest outing focuses more on collaboration: “P.O.L.Y.” features Maceo Haymes, My Gold Mask and The O’My’s. Fellow female MCs Angelenah and WhoIsFluffy both are featured individually, in addition to appearing as part of Rapperchicks—who along with Hologram Kizzie and Denver DJ Ill-Esha are due to drop a full-length soon, followed closely by a performance at SXSW in Austin and a tour. “I can’t wait for people to hear it,” says Psalm One. “It’s very aggressive—you have music that is more R&B flavored, but this particular sound is very punk-like, aggressive rap.”

More immediately, in terms of Dre Day, she’s most looking forward to how the DJs will “put together the mash-ups” and the results of their crate-digging to find the “real Dr. Dre music.” She also gets a kick out of the props, indicating that last year “the DJ table was turned into a low rider, complete with hydraulics.” She also promises that the “Crip Walk” dance competition will be hilarious.

Dre Day will be headlined by Makaya McCraven + The Chronic, a session band of Dre Day Players, and will also feature J. Arthur (of The WHOevers) doing a Nate Dogg tribute, a special performance by B.O.A.T. (Big Once + Trentino), a “special West Coast/G-Funk edition of Original Rap Karaoke” and many other Dre-themed activities. Tickets to the 21+ show are $10 in advance, $15 at the door and $20 VIP.