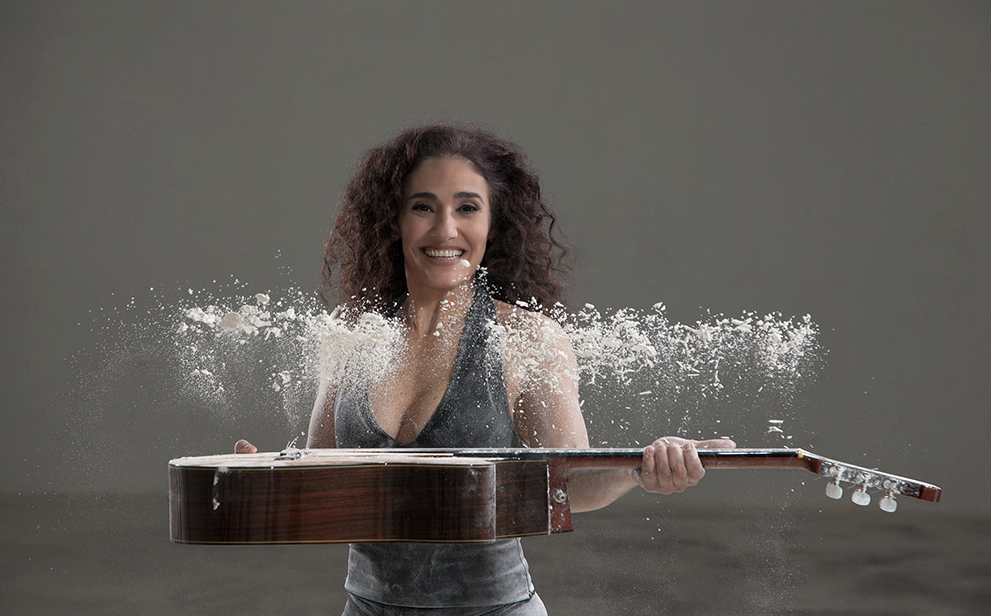 I’m pretty sure I’ve got Brazilian singer-songwriter Badi Assad down cold. I’m guessing that, as the younger sister of two brothers—Sérgio and Odair, both gifted guitarists—who perform together as Duo Assad, she grew up in their shadow, and knew the only way she’d get out of it was to be bigger, better, bolder. So when Badi takes the stage with her guitar, you don’t just get some supremely supple strumming; you get ravishing singing and jaw-dropping vocal percussion, too. She’d probably have taken up handstands and juggling, if it came to it, but as it happens what she’s got on offer was apparently enough to steal some attention away from her older sibs. She’ll steal yours, as well; she’s basically the dictionary definition of “dynamo,” if the dictionary is Portuguese—meaning she bowls you over more through focused stillness and gentle undulation than any overwhelming display of prowess or volume. Her power is mainly implied; it’s all about control, and hers is exquisite. I’ve always regarded the genius of Brazilian music as its ability to convey lightness and simplicity when in fact it’s dauntingly complex, and has such a spine of iron. Badi Assad brings that sensibility, not only to her own compositions and other Brazilian works, but to English-language tunes like Björk’s “Bachelorette” and Mumford and Sons’ “Little Lion Man”—the latter of which she completely transforms from the original’s angry confession to a kind of graceful exoneration; and it’s a lovely kick to hear her sing, in her gently inflected English, “But it was not your fault but mine / And it was your heart on the line / I really fucked it up this time / Didn’t I, my dear?” The listing for her March 2 gig at Old Town School of Folk Music doesn’t mention a band, so I’m presuming it’s a solo show, which seems to be her norm; and once you see her perform her own beat-box style percussion—while she’s simultaneously singing—you’ll understand why. You’ll also go home and immediately try the same thing in front of a bathroom mirror, to see if you can pull it off, too. Take it from me: you can’t. (Robert Rodi)