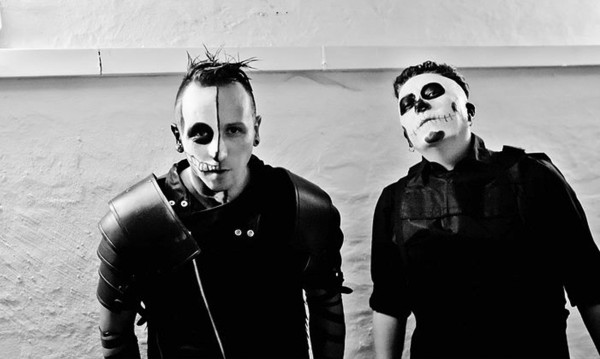 Formed by creepster cousins Erik Garcia and Oscar Mayorga in Mexico City at the peak of the harsh electronica rise in the oh-so-delightfully abysmal nineties, Hocico (pronounced O-see-ko) has endured and evolved where many other bands of its particular penchant for visceral and ethereal industrial and EBM have faded.


The diabolical duo are better known in the Mexican underground goth scene as Erk Aicrag and Racso Agroyam (anagrams of their real names), and have been making electronic music since they were fifteen years old. It definitely shows. Their raw and unfettered aggrotech sound hones in on the brutality and alienation of our world. Aicrrag’s criticality and dual Spanish-English lyrics exhibit his affinities for heavy philosophical and literary inquiry. I think I’ve even caught interviews with Erk in German, but don’t quote me on that one. Where existentialism and gender violence, politics and rage meet in Erk’s lyrics will definitely be left up to the diehard fans to discern; but either way this night promises to be a full-on stomper. (Jose Luis Benavides)