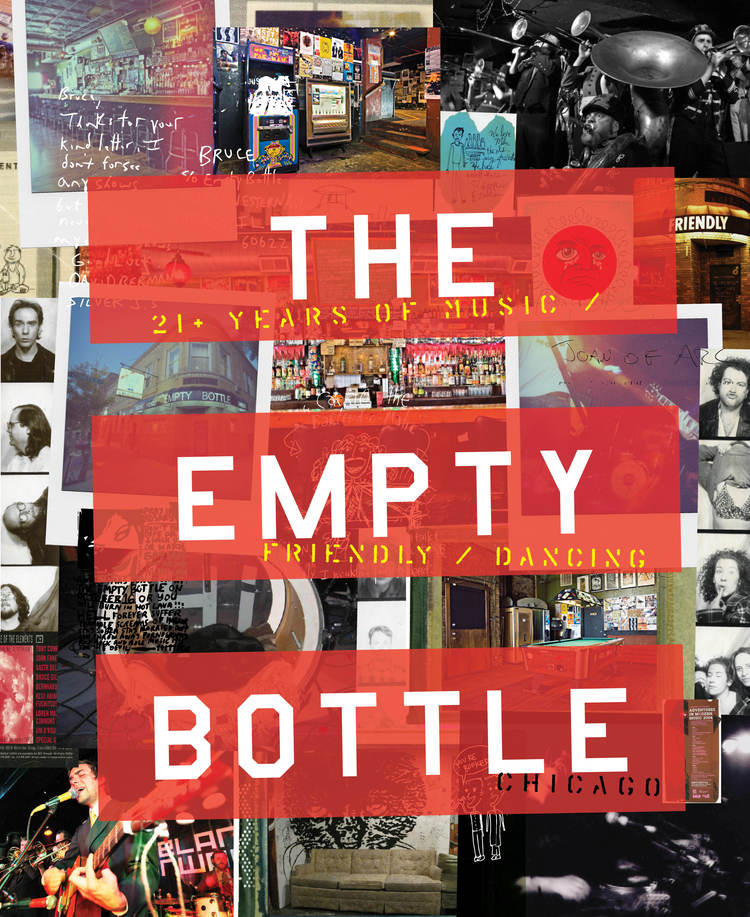 I didn’t have high expectations for “The Empty Bottle: 21+ Years of Music / Friendly / Dancing” (especially with that grammatically awkward subtitle; yes, those are the famous call-outs emblazoned on the club’s awning, but in print they look like something translated into Mandarin and then back again). Histories of entertainment venues tend to skew either toward brain-numbing listicles or institutional hagiography. But in fact “The Empty Bottle,” edited by John Dugan, is pure delight; it’s a compendium of short tributes and memoirs by close to two dozen people who have worked, played or hung out at the club, and whose voices are wonderfully varied and engaging. Yes, there are the obligatory recollections of early dates by Nirvana and Arcade Fire, but the cumulative result is something much greater—in fact, a genuine and consistently beguiling social history. Like, if Studs Terkel had been born in 1980.

Empty Bottle owner Bruce Finkelman’s piece is naturally the standout, not only because his point of view is the most encompassing, but because the guy can goddamn write; he’ll sling out a single passage that recalls a whole era, and do it with serious panache. Take the following—not much more than an aside in his narrative about the club’s original location.

Matt Fields was deejaying. We had this jukebox that we talked the game company into letting us stack with our friends’ music. It was fucking great. We were selling Tombstone pizzas. We had this crazy-ass pickled fish that if you could eat one, we’d give you a free beer. We were selling Huber Bock, only a dollar. It came in these bottles that were chipped.

I put on a couple weekends for My Pal God stuff, Hurl and A Minor Forest and some bands from here. Some guys built a kissing booth in the back. It was supposed to be, ‘You pay a dollar and you get a kiss’ and it turned into a debaucherous everybody’s-kissing-somebody-else. It was just like kids. It was very sweet, but there was a lot of open mouth kissing between people who’d always been curious what that’s like.

There was a band called Lynx from Boston, they played one night with Emperor Penguin. They all were wearing chinos, and in the middle of one song they planned it that they’d all urinate in their pants at the same time. Some people say they were not able to perform as planned, but I recall looking at these guys and watching these spots get bigger and bigger.

I also loved the essay by author Joe Meno.

The bands seemed almost as temporary as the music. Mark and I’d go to shows around town, see these bands play, buy their records, and then watch as these bands broke up or simply disappeared. Which is what we both secretly wanted. Because we knew, because we had an unspoken understanding. Rock n’ roll, real rock n’ roll, wasn’t ever meant to last. Come on. Look at the Beatles. Or just look at the Rolling Stones.

The piece by Tim Kinsella (of the band Joan of Arc) is the most stylistically taut, and the most valedictory (not of the Bottle, which continues to thrive, but of that incandescent moment in time).

Didn’t I once know every single person that worked here?

Didn’t I once come to shows here and know every single person in the room?

There is nowhere else on earth I am more comfortable seeing a show. Not that it’s some ideal dream space, but it’s home. You don’t have to notice it and you love feeling at home and taking that for granted. But like visiting home, it just makes you feel old. Everyone else knows each other and looks young and it makes you feel old. Everyone else seems to have things easy, knowing how to hang out together, have fun.

No one else needs to be up early?

The photos are many, lavish and ravishing, and convey the anarchy and the ecstasy to be found within the club on any given night in any given decade. And the art direction and graphics are killer sharp and sleek. Visually, the package is a knockout.

In the end “The Empty Bottle” more than accomplishes its goal—which is to document the ways in which the club has been one-of-a-kind, and in doing so remind us how much we love it, and how much we owe it. Above all, it makes you want to go to the Empty Bottle. It doesn’t even matter who’s playing. Because in another sense it always matters who’s playing. As John Darnielle of The Mountain Goats puts it in his foreword, “I’ve seen many bands onstage at the Bottle with looks on their faces that I recognize: that look of pleasant surprise, of unexpected comfort… It says, I like playing here. It says, It is a pleasure to play our music in this house. It says, This is what I hoped it would feel like to play a show before I ever got to play a show.” (Robert Rodi)

A book release party is scheduled for June 8, 9pm, at The Empty Bottle, 1035 North Western, featuring The Ponys, the Goblins and Earring. Tickets are $20.