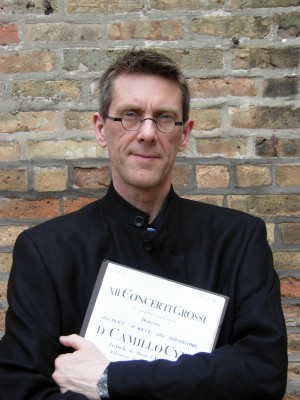 Nine years is a relatively long time for a period-instrument orchestra in Chicago: some twenty-five years ago, the City Musick only made it to six seasons. It’s not that we don’t have the performers and the audience for early music, but lining them up with unified artistic vision and managerial leadership for the long term has thus far remained an elusive formula. Even Music of the Baroque, a modern-instrument ensemble with a long history, managed to survive only after a coup more than a decade-and-a-half ago when its founder was unceremoniously dumped by his own board.

Baroque Band was founded by UK violinist Garry Clarke with the hope of beating the odds, and in its prime, its future looked promising. Clarke and company became the pit band for Chicago Opera Theater’s Baroque operas, all but a memory since the departure of Brian Dickie, but having regrouped somewhat in Haymarket Opera. As it happens, a defection of key players from Baroque Band to Haymarket Opera, and the need to bring in players from the East Coast for BB concerts to compensate, likely contributed to making the current model financially unsustainable.

Clarke had indicated a willingness to hand over the artistic leadership of the group, to the point of engaging an entire season of would-be candidates a couple of seasons ago. Clarke had previously indicated that he would step down at the conclusion of the current season, but alas, no offers were reportedly made for a successor, and instead the board voted to disband, literally.

But happily, BB is going for Baroque with a bang, not a whimper: a program of virtuosic violin concertos by Locatelli and Leclair—including Locatelli’s “L’Arte del Violino,” also the name of the program—with guest artist Rachel Barton Pine, along with a finale of the Bach Double Violin Concerto with Pine and Jesse Irons as soloists. There is much to celebrate and look Bach upon gratefully. (Dennis Polkow)