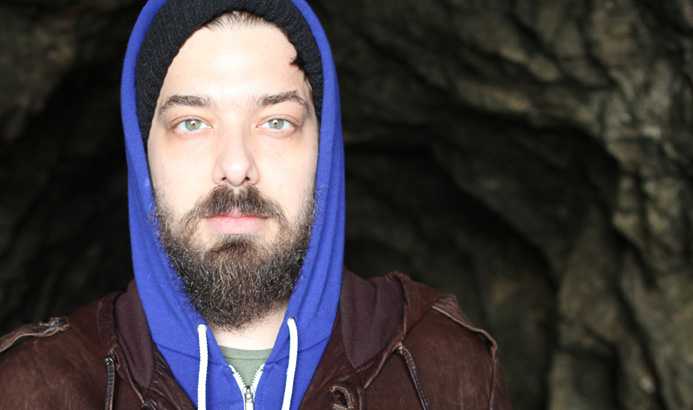 The Shakespeare of hip-hop, Aesop Rock, turns forty this month (he shares a birthday with Kenny G, he notes on the track “TUFF”), and although he may be growing more contemplative as middle age approaches, he’s not slowing down. The rapper born Ian Matthias Bavitz has just released his seventh solo album, “The Impossible Kid” (Rhymesayers), but he’s also kept busy as a collaborator, being a member of the Weathermen and Two of Every Animal (both with rapper Cage), having worked with Kimya Dawson as The Uncluded and formed Hail Mary Mallon with Rob Sonic and DJ Big Wiz.

Given that he’s touring the West Coast (with the aforementioned Sonic) at press time, he provides some insights into the new record and where he’s “at” via email from an L.A. hotel room. Aesop says “The Impossible Kid” has received a great response, and the shows have been really good so far: “I never really know what to expect, but by and large it seems like the people are digging it.”

In addition to a salvo of videos—including a full-length video reimagining of Stanley Kubrick’s “The Shining” with animated toys, set to the album’s music (primitive, but bizarrely hypnotizing)—five animated shorts were produced to promote “The Impossible Kid.” These feature a live-action Aesop, playing himself, in a forest, receiving psychoanalysis from a cartoon bear (with occasional cameos from other wildlife) and his therapy cat, Kirby. These vignettes are spot-on hilarious, and might seem like a fun mechanism for providing background into the album’s songs; but in fact he’s actually been in therapy since suffering a “nervous breakdown” in August 2001, and the tracks on this record seem to be his most personal yet, alternating between recounting stories of his life or dialogue exchanged from visits to his therapist.

Is Aesop Rock, as he says in one line on the record, “brutally committed to relinquishing his privacy?” “There’s some of it in that line, sure. This career has been odd for me, and having even a smidge of celebrity about me can feel strange. I do my best to navigate it, but admittedly [I] have thoughts of jumping ship on all this and moving somewhere…” He has already gone that route to a certain extent, having written most of the music and rhymes for the new record while living in a rented barn in the Oregon countryside, an experience he treated like a getaway and describes as “great, quiet, got a lot of work done.”

But when pressed on if being so honest and autobiographical comes at a cost, Aesop says “It’s weird—I think I was just shutting everyone out of my life and writing what felt important. When you do that, you can’t even remember that someone is gonna hear this one day. So while I’m okay with everything I said on there, I have moments where I doubt myself about it. Nothing to do now though—it’s too late.”

Before he became Aesop Rock, he grew up on Long Island. As a child he took piano lessons and learned to play bass in middle school, so there was “a foundation for music there,” he recalls. “My older brother got way into music and art and stuff, and I kinda mimicked him a lot. He eventually got a four-track [recorder] and keyboard and I’d make little things sometimes.”

Indeed, having been the middle child between two brothers seems to have influenced him, both as having grown up “in a noogiefest” and from each brother’s disparate anecdotes tying together the track “Blood Sandwich” on “The Impossible Kid.”

At the same time, Aesop says, he was “always drawing and attempting to make that my main thing. I just liked making shit and had a decent work ethic about it.” Indeed, he went on to obtain a degree in art from Boston University, but started collaborating in college with an aspiring rapper and producer, Blockhead (who allegedly gave up on delivering his own rhymes after hearing Aesop Rock freestyle). The single “Rings” reflects the former visual artist’s ambivalence about having abandoned his training and first passion in favor of hip-hop, but the listener is still the better for it.

In terms of whether his forthcoming fortieth birthday has impacted the new album, he admits that the track “Lotta Years” “is certainly about ‘kids these days'” and just acknowledging “my being at the point where the youth baffles me. I think with forty looming I have been reflecting a lot. In your thirties you can somewhat pretend you’re young, but forty just kinda feels like there’s no more looking away. Some days I don’t care, but others I have mixed feelings about it…you just start thinking ‘what else is out there?’ Not that I’m done rapping—but I dunno, it feels like a ‘next phase’ type age, and I’d like to figure out how to embrace that.”

Aesop Rock says he and Rob Sonic have been doing a few numbers from their Hail Mary Mallon project on their tour together, so look forward to that when he comes to Chicago on Friday, June 3 at Metro (3730 North Clark). Homeboy Sandman opens the eighteen-plus show, and tickets are $22 in advance, $24 day-of-show.