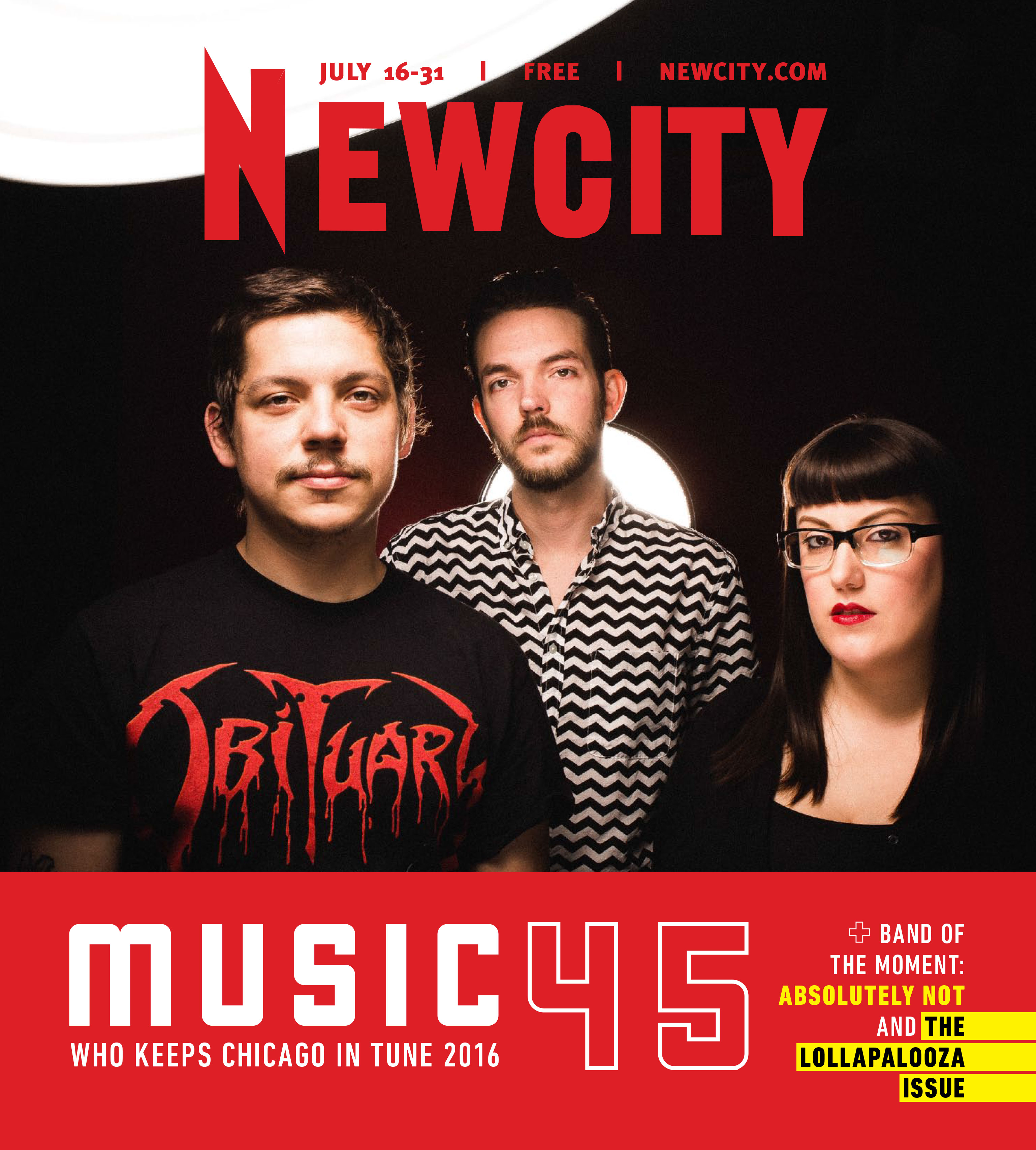 In early May I visited Minneapolis and found a city still reeling from the death of Prince Rogers Nelson just a few weeks earlier. There was a sizable contingent of mourners still outside Paisley Park (though the first generation of purple balloons on the perimeter fence had visibly wilted) and the sense of grief was pervasive—infecting everyone I encountered over the duration of my stay, from suburban moms to inner-city busboys. I had to wonder whether there’s anyone in Chicago music whose loss would deliver so brutal a hammer blow. There isn’t, of course; but then, Minneapolis is a very small city (if you accidentally dropped it over Chicago’s South Side, you’d have to search to find it again) and Prince was a planetary-scale talent.

But it seems to me that even Prince might have had a slightly harder time dominating his native city’s musical life if he’d been born in the 312 instead of the 612. Chicago is just too vastly, simmeringly, irrepressibly and variedly musical. It remains, as it has for decades, a melting pot of ideas, traditions, innovations, provocations. On any given night, its stages and street corners, pubs and parks, band shells and backyards are bursting with euphony; this is a city in a near constant state of aural ferment—some of it frivolous, some of it significant, all of it keenly, nearly kinetically alive. And what you’ll find below is our admittedly subjective ranking of the music makers whose endeavors currently resonate most profoundly, both here at home in the Windy City, and in the larger world. Minneapolis had Prince; we have these princes. (Robert Rodi)

All photos taken by Joe Mazza/BraveLux.

1
Buddy Guy
Buddy Guy, like Chicago blues itself, is easy to take for granted. The legendary blues guitarist turns eighty on July 30, but it will be just another gig for Guy—in Rochester Hills, Michigan, with British rocker Jeff Beck—across an ongoing career that is now spanning some sixty years. The next night Guy and Beck perform at Ravinia Festival: no mention is being made of Guy’s milestone birthday in the concert promotions and Beck, a protégé of Guy, is the headliner. Chicago and Guy have been inseparable since Guy made his way up from his native Louisiana in 1957 to find work up north in Chicago and ended up procuring a regular gig with “the Mud,” as Muddy Waters was called. The Grammy Award-winning, Rock and Roll Hall of Famer went on to become an icon of hard-hitting blues and pioneered the West Side style of electric blues that influenced the likes of Hendrix and Clapton, among countless others. Guy has not been shy about hooking up with less-gifted, more popular guitar icons as his devotion to his art form and desire to gain wider exposure for it has always been larger than his ego. But the real Guy can best be experienced unleashed in his natural environment: in the wee hours at a blues club. Guy himself will be making a rare summer appearance at his own Buddy Guy’s Legends on August 1 for a tardy hometown marathon birthday celebration with family and friends that will, like Guy himself, be unbridled.

2
Riccardo Muti
The Chicago Symphony Orchestra and its music director Riccardo Muti are dovetailing milestone anniversaries: the CSO concluded its 125th season late last month and Muti turns seventy-five on July 28. Both are longtime international superstars: the CSO has been considered the best orchestra in America, and with Berlin and Vienna is one of a triptych of greatest orchestras in the world since the glory days of Fritz Reiner and Sir Georg Solti. Muti, with his unique combination of precision, lyricism, passion, vision and leadership, has been considered the greatest conductor in the world before ever coming to Chicago. Together, the unique Muti/CSO partnership is infinitely larger than the sum of its extraordinary parts and is sonically scaling uncharted musical heights that continue to astonish the culturally cognoscente, as would be expected. But Muti’s ability to meaningfully reach out to Chicagoans across all segments of society is slowly but surely removing the cobwebs from an organization that has long been primarily considered the highbrow cultural playground of the one percent. Whether performing for local prisons or food banks, students or seniors, billionaires or the homeless, the Muti touch has become the Chicago touch.

3
Jeff Tweedy
After recording an album with his teenage son Spencer (2014’s “Sukierae”) and producing one for British folk legend Richard Thompson (2015’s “Still”), Jeff Tweedy finally consented to give the worldwide cult of Wilco fans what they’ve been waiting for—which is, of course, more Wilco. It began with a new album, “Star Wars,” on the band’s own label (dBpm Records), which earned a rhapsodic review from Rolling Stone (“It’s their most concise, catchy, naturally songful album in at least a decade—the sound of a band reconnecting with the fun of rocking out together in a room”). Now comes an extended tour that includes a hometown show at Millennium Park on August 21 and a five-night stint in September at the legendary Fillmore in San Francisco, among other American burgs—before jumping the pond to four more continents, one of which Tweedy especially looks forward to. “It’s not an understatement to say our South American fans are among our most enthusiastic in the world,” he says. “They’ve been waiting patiently a long time for us to come there and I am happy to say the wait is over.”

4
Common
Before he was Common, he was Common Sense and before that he was born Lonnie Rashid Lynn Jr. on the South Side in 1972, which at this point makes him an elder statesman in Chicago hip-hop. One might think that our original hip-hop export moving to L.A. would mean that Common has “gone Hollywood,” but that’s clearly not true, given his dynamic and passionate live performances on his current tour, and his stellar album, “Nobody’s Smiling”—possibly the most criminally overlooked release of 2014. His next record already sounds intriguing, given that he just Tweeted a picture of Public Enemy’s Chuck D. in the studio with him. Oh, yeah—in 2015 he also won an Oscar and a Golden Globe for his song with John Legend, “Glory” from the “Selma” soundtrack. Despite his nom de plume, there’s nothing common about any of that.

5
R. Kelly
Robert Kelly’s monster 1996 hit, “I Believe I Can Fly” might as well have been called “I Believe I Can Get Away With Having Sex With Underage Girls,” for despite numerous allegations, videotaped recordings and an indictment, he hasn’t been convicted of anything. But his reputation—and sales—have taken a hit. His December 2013 album, “Black Panties”—whose cover is as provocative as the title—debuted at number four on the Billboard 200, selling 133,000 copies in the first week… but only sold under 500,000 units total. Later that month, The Village Voice published a lengthy interview conducted by rock critic Jessica Hopper with former Sun-Times pop music writer Jim DeRogatis, who had broken the story on Kelly’s alleged perverted penchants. The piece received four million unique views, which the website Vice called “a turning point in the decline of Kelly’s image.” His most recent record, December 2015’s “The Buffet” was his lowest-charting album ever, selling only 39,000 copies in its first week of sales, keeping it out of the Top Ten on the Billboard 200. But he’s still worth $150 million, plenty of dough to cover future out-of-court settlements.

6
Chance The Rapper
After Common and Kanye, today’s ambassador of Chicago hip-hop is Chancelor Bennett, and his SaveMoney crew is at the forefront of all that makes today’s scene great. The follow-up to his “Acid Rap” mixtape, “Coloring Book,” has been an omnipresent force since its release in May; it debuted at number eight on the Billboard 200, and generated 57.3 million streams in the first week, becoming the first release to chart based solely on streaming. Sure, Chance’s visibility hasn’t been hurt by being publicly boosted by fellow Chicago hip-hopper-done-good Kanye West, but his music and commanding live performances are strong enough to stand on their own.

7
Smashing Pumpkins
After unleashing the synth-pop splendor of 2014’s “Monuments To An Elegy”—the second album in the band’s ongoing Teargarden by Kaleidyscope song cycle—Smashing Pumpkins did an about-face. In July 2015 the band staged a brief series of acoustic shows with electronic accents, dubbed “In Plainsong,” just prior to a more traditional co-headlining tour with Marilyn Manson. The group’s manager, Peter Katsis, described the experience as “the opposing side to The Pumpkins’ usual roar.” “In Plainsong” proved sufficiently popular that in spring of this year a full tour was initiated, which brought the Pumpkins to the Civic Opera House on April 14; and front man, principal songwriter and guiding genius Billy Corgan has now set aside the next album in the Teargarden cycle (the previously announced “TBD”) to pursue an album of “acoustic-electro” tunes. Meanwhile, Corgan has continued to cultivate his reputation for eccentricity, becoming a regular guest on the radio show of rabid conspiracy theorist Alex Jones, where he has served up denunciations of autism vaccines, chemtrails and Bernie Sanders.

8
Mavis Staples
If Bob Dylan had had his way back in the early 1960s, Mavis Staples would have been Mrs. Robert Zimmerman. Over half a century later, the woman who rebuffed “Bobby,” as Staples calls him, is touring with Dylan for the first time ever, including a recent stop at Ravinia Festival. In December, she’ll become a Kennedy Center Honor recipient. The Staple Singers began as a Chicago gospel group but ended up uniquely cross-fertilizing gospel with rhythm and blues. Guitarist and songwriter “Pops” Staples was its patriarch, and while four of his daughters sang in the group, Mavis quickly rose to the forefront as its vocal powerhouse. Providing the soundtrack for the Civil Rights movement of the 1960s as a favorite of Martin Luther King, the Staple Singers became a cultural phenomenon. As a solo artist, Mavis has taken up the mantle of the Staple Singers and continues to inspire. Her new album “Livin’ On a High Note,” however, breaks new ground by showcasing Mavis in “upbeat” songs written for her that show her in a new light indicating that at seventy-six, she is still relishing in taking up new challenges for herself.

9
Eighth Blackbird
The contemporary music ensemble Eighth Blackbird recently picked up its fourth Grammy Award and a MacArthur award. The Chicago-based group has been “in residence” at the University of Chicago for several years as well as more recently at the Museum of Contemporary Art. But both residencies ended recently, making the future of where we will be hearing Eighth Blackbird in its own city an open question just as the ensemble is celebrating its twentieth anniversary. The six-member ensemble—which includes new member Nathalie Joachim on flutes, Michael J. Maccaferri on clarinets, Yvonne Lam on violin and viola, Nicholas Photinos on cello, Matthew Duvall on percussion and Lisa Kaplan on piano—is at an advantage, as being a small group means the newest and most difficult pieces can be carefully prepared as if they were standard repertoire. They have also dumped classical music conventions that they consider audience-alienating such as stiff formal dress and having members’ heads lost in reading music: the group memorizes its repertoire to allow greater ensemble and audience interaction. But attention is also paid to visual space and lighting, sometimes even the movements of the players.