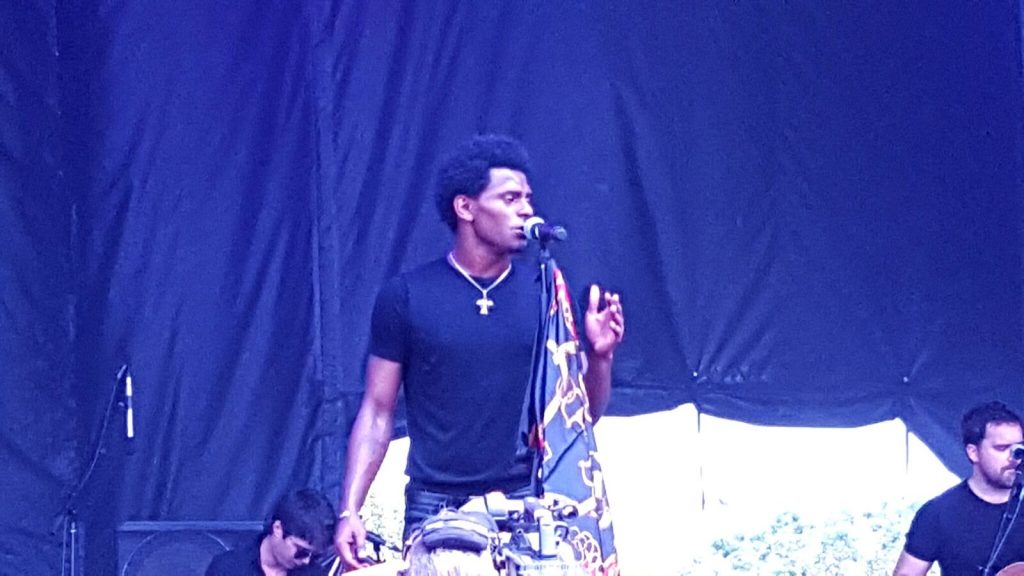 As someone who’s never been to Lollapalooza, I wasn’t sure what the festival had in store for me. Friday’s big headliner was Radiohead, which thousands of people were there to see. But I couldn’t stay for the big event; instead, I showed up at the gates at 11am to traverse Grant Park and see what the day’s bands were like. As I soon learned, it’s worth it to come early.

Aside from the headliners, I didn’t know who most of the acts were, but after doing some research it was clear I shouldn’t miss California’s Con Brio. Playing at the Lakeshore Stage, they drew a modest crowd at first. But once they’d released their energy and funk, and good vibes, more people moved closer, knowing they were seeing music’s next hot band. Fronted by the electrifying Ziek McCarter, Con Brio are unlike any other soul/R&B outfit. Energetic horns, slick blues guitar, thundering drums, and tickling synth all come together for their sound, which can only be described as “damn good.”

Their set included the songs “Paradise,” “Liftoff” and “Sundown;” every minute was filled with nonstop dancing in the audience. Everywhere you looked someone was pumping up the crowd, but it was impossible to keep your eyes off McCarter. He didn’t walk out on stage, he slithered out. An amalgamation of James Brown, Michael Jackson and Jackie Wilson, he moved as if from another planet. His feet never stopped shuffling, his gyrations were uncontrollable, and his spins could rival those of a certain pop star. All it takes is a flash of his gleaming smile and one quick split, and you’re enamored with McCarter.

He fed off the crowd’s energy, making sure no one would forget Con Brio by pulling off three successful back flips and a cartwheel. I am now officially a Con Brio fan. Luckily, there was an FYE tent on site to grab their latest album.

Afterwards I wandered around other stages hoping to discover another favorite band. Near Buckingham Fountain, a soulful voice drifted through the air and caught my attention. I drifted toward the Bud Light Stage, entranced by Lewis Del Mar’s powerful vocals. This folk-experimental pop duo is another band I didn’t know. Though the music isn’t necessarily made for jamming out to, singer-guitarist Danny Miller’s voice is so appealing. Every word is impassioned, like Miller’s making a call to arms. I stuck around for three songs.

Oklahoma City rock band Horse Thief played the small BMI Stage and drew a decent crowd. Their music served as a breather for weary festival goers. Frontman Cameron Neal’s vocals are mellow with a haunting air, while the music is subdued with a hint of gritty edge. While they were good, I was in the mood for dancing. So I went back to Lakeshore to catch Saint Motel.

It was hard to get near the stage since the indie-pop band’s crowd was massive. You’d think Radiohead was playing early. I stood on the sidelines and shimmied to the upbeat, bubbly, bouncy sound. Songs like “Puzzle Pieces,” “Move” and “Born Again” are exactly what you want to hear on a Friday: fun, happy, and ideal for having a good time. The crowd was more than feeling it. Every time vocalist AJ Jackson played an opening riff on his tiger-shaped keyboard, people went nuts. It was impossible not to move to Saint Motel’s dream pop. But if I wanted to get a good spot for the Struts, I had to leave midway through. As I walked across the field toward the Samsung stage, Saint Motel treated Chicago to a cover of Tom Jones’ “She’s a Lady.” It was unexpected, but then anything can happen at Lollapalooza.

I’m not the biggest fan of glam rock. I can stand one or two songs by Poison, but not much more. So it’s surprising I liked the Struts so much, and most of it had to do with charming frontman Luke Spiller. Looking like the lovechild of Freddie Mercury and Mick Jagger and wearing a massive fringe shawl, he commanded both the stage and the audience. Given his lovely accent, biting attitude and wild dance moves, I wouldn’t be surprised if some in the crowd walked away pregnant.

They performed “Kiss This,” “Everybody Wants” and “Put Your Money on Me” with swagger, edge and various costume changes. It seems impossible for a frontman to interact with a crowd as massive as this, yet he did it by call-and-response and leading sing-alongs. He even told thousands of people to get on the ground and jump when he says, to make history. Feeling the vibrations of thousands of feet beneath you is exhilarating. What makes the Struts so good, aside from Spiller’s impressive range, is that they make rock music fun again. They’re not being hard, brooding or gritty. Instead they take you back to days when rock was only about sex, drugs and partying. It’s music you crave when you want to forget the weight of the world. After they took a bow and walked off stage, the title of their album proved true: Everybody Wants the Struts.

It was almost time to go home, so I made one last round of the different stages. I stopped to catch five minutes of Muddy Magnolias. It was hard to enjoy their beautiful harmonies without realizing how bad the BMI Stage is. It’s hidden away in a nest of trees with no lighting, making it hard to see; and the sound was poor. Lolla may want to reconsider the placement next year.

Though I’m not the biggest fan of EDM, I wanted to check out Perry’s Stage. It was a madhouse. I stood far from the stage where Audien was playing and saw thousands of people dancing in unison. It was weird how people ran toward the stage in droves every time the beat dropped. The area got more crowded, so I left after five minutes.

As I made my way to the exit I was energetic, even though my entire body ached. I finally understood why people are so drawn to the festival. There’s something exciting and thrilling being surrounded by music, its fans, and discovering new bands. It leaves you on a high for days and if you’re one of the lucky ones, you get that experience all weekend. Though I didn’t get to see Radiohead, I’ll never forget my first Lolla.