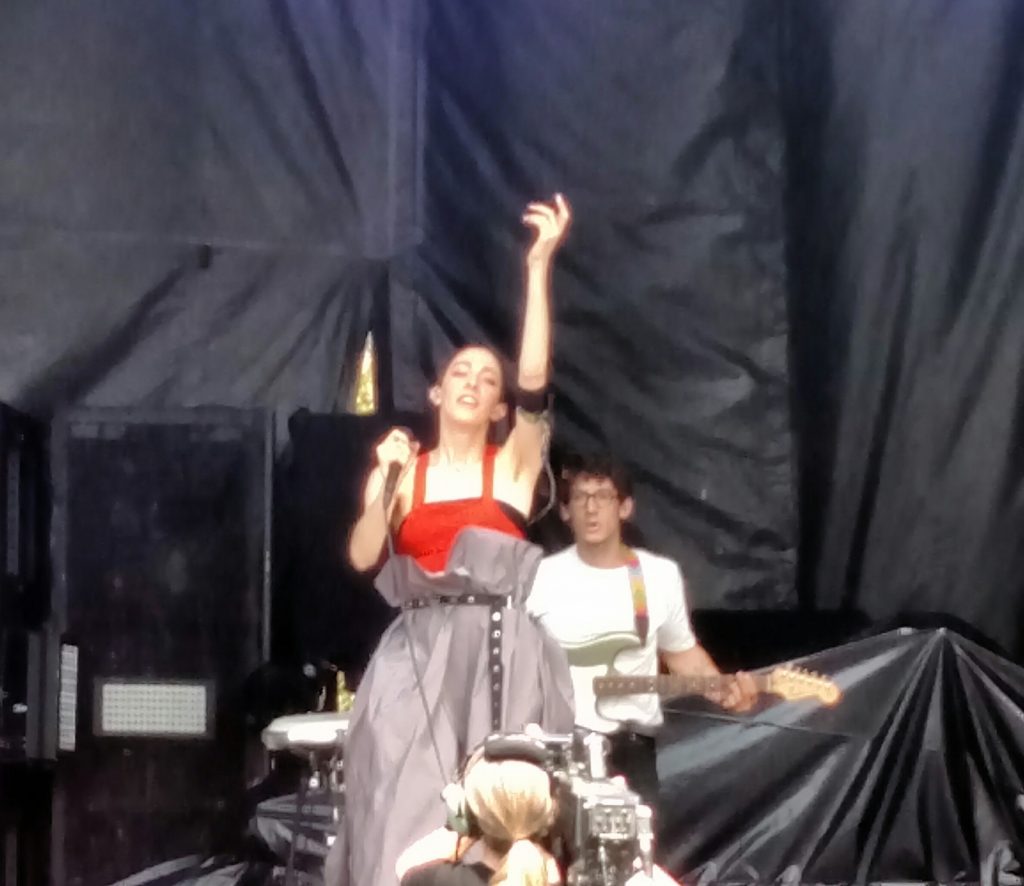 One unusual phenomenon unique to festivals is hearing 2am dance music in the early afternoon. Take for example Haelos, a triphop band making the circuit this year. Their music is trancelike, with triple harmonies, perfect for stepping or rock steady while sipping an Amaro after a long night out. But at Lolla (as at Coachella and other festivals) they were on way early in the afternoon on the main stage, when they could just as easily handled the pre-Radiohead slot at 7pm. Also, as luck would have it (for me at least), they played a short and intimate set before fewer than a hundred people in the Toyota music den—turning it into a hazy daytime nightclub.

Which brings me to Chairlift, the synthpop duo of Caroline Polachek and Pat Wimberly from Brooklyn (although they met and formed the band at University of Colorado). Coming from the dance (as opposed to hipster) side of the Brooklyn music scene, Polachek seems to be in constant motion, swirling to the soulful beat track supplemented by saxophone and guitar. Her extensive vocal range and arm and dance moves got the crowd energized, so that Chairlift’s version of dance with Polachek, convincing the crowd to do a unified sway with her, worked in the afternoon sun.

The power, emotion and politics of the afternoon came from The Joy Formidable, a Welsh band whose constant touring has turned the adjective in their name from imagery to reality. The three-piece ensemble squeezes every ounce of energy from their instruments and various pedals, hitting it out of the park with anthems about conquering fears, being yourself and living free of the things that shackle you to the past. Rhiannon “Ritzy” Bryan sings and shreds in a dreamy way, but the voice lilts like Dolores O’Riordan of the Cranberries and the anthemic power chords are like the Edge on double espresso. And even when they had to restart a song because the guitars came in too late, the crowd was told, “At least you know we are not USBs”—the sound is real. Bassist Rhydian Dafydd, in introducing a chilling new song about the news traveling through conversation, spoke about how apathy fueled the success of the Brexit movement, telling the crowd that we should not be apathetic—“You can’t let that mop head get into office.” The band closed the set with Ritzy heaving her guitar into the gong behind the drum set; case closed.

Big Grams, the combination between Big Boi of Outkast and Phantogram, provided a surprisingly cohesive and somewhat unique blend of hip-hop groove and glammy electro-pop. While such a mixture could result in cacophony among talent and tune, the singers and sound clearly had a chemistry and respect for each other’s space and vibe. Vocalist Sarah Barthel’s lush, little-girl-with-a-bad-attitude falsetto provided a perfect counterpoint for Big Boi’s decisive and melodic rapping. The singers did not compete but complemented and punctuated each other as they traded verses and attention over a scratching DJ and sound-generation dual soundtrack that kept a beat and repeat, one step above casual, bounce. Though the set was dominated by material from their recent collaborative EP, they weaved in a couple of their individual works, with Outkast’s “Ms. Jackson” turning the large crowd into a singular head-bopping, finger-pointing sea of gentle rap.

It was nice to see the indie scene represented by Potty Mouth, a four-piece band from western Massachusetts that could just as easily have come from the Northwest, or played Riot Fest as Lolla. Supporting their self-released EP, they were proud and earnestly excited to be playing a side stage at their first festival and mused about the difficulties of seeing several bands that they wanted to see and whether or not to keep their sunglasses on. They have come a long way in the five years since meeting at Smith College. In their first huge festival after being together five years, they delivered riotgrrl meets grunge in their Sleater-Kinney guitar lines and pulsating back beat.