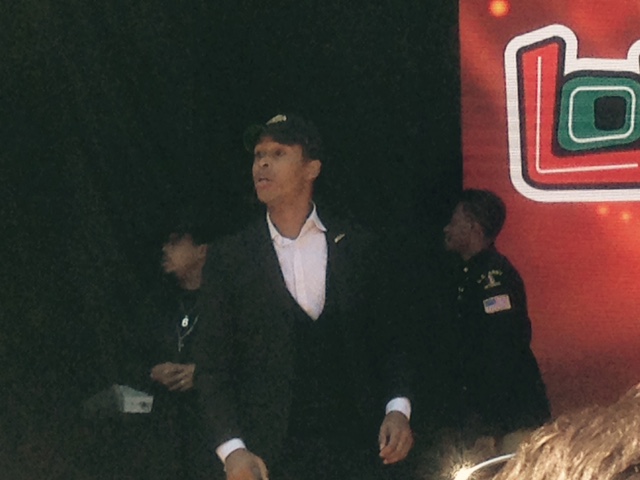 I’m sure that there are people who attend music festivals for the sole purpose of gorging themselves on a single favorite genre—grunge, or garage, or shoegaze, or whatevs. But I think a better use of the time and available talent is to try to achieve some sort of catharsis—juxtaposing acts to create a narrative or thematic arc, that will leave you with the kind of experience you can’t get by the usual means of seeing a single band at a single venue on a single night.

I managed exactly this at Lollapalooza on Sunday afternoon, beginning with Sir the Baptist’s performance on the Pepsi Stage. Sir—a local lad, brought up on the South Side as William James Stokes—is a natural showman; for him the concert stage functions additionally as both a theater and a revival tent. It almost has to, in order to accommodate his highly original blend of hip-hop, R&B and gospel—what he calls “church pub rap.” He framed his early-Sunday time slot as an actual church service—though without the usual bland platitudes that might prompt you to expect. For Sir, church is both highly personal and urgently political—as became immediately apparent when he arrived onstage carried in his own coffin.

“Would you care if it was me?” he asked the crowd, directly challenging them to confront the epidemic of violence that has afflicted this city more acutely than others. “Are we here to change the world or no?” he asked later, over an audio track of news anchors reporting on mass slayings. This was a set-up to his supercharged protest song, “Wake Up,” which boldly confronts what violence costs us: “Trayvon was the next Martin Luther / And just arrived early to the shooter…What if Hadiya had an idea / But it died in the park she coulda been Rosa.” It was an electrifying performance, backed by singers in white suits and floor-length black choral robes, and adorned by a bevy of dancers.

“My name is Sir the Baptist. My dad was a Baptist minister and my mom was a missionary,” he said as though it’s all the introduction required; and in fact it might be. “Can I hear you say, church?” he exhorted the crowd at one point; and when their response was too tepid, he demanded a re-do. “You gotta say it like my momma’d want you to—you gotta put your arms up: Chuuuuurrrch!”

He closed his set with the gorgeous foot-stomper, “Raise Hell”— “You gonna have to forgive me / I’m gonna raise hell until I reach heaven’s door”—that amply illustrated what he meant when he said, a few minutes before, “You know how church gets so good you can’t leave it?”

And we didn’t leave it—not till the ring-out of the last “Hallelujah.” After which I headed across the festival grounds to the Lakeshore stage, to hear the London alt-pop duo Oh Wonder. It was the perfect follow-up to Sir’s fiery passion; Josephine Vander Gucht and Anthony West deliver plenty of intensity, but with the kind of cool sensuality that keeps passion on a very tight leash. They’re young, they’re beautiful, and they exude a kind of infectious world-weariness in tunes like “Dazzle”—“Not in it for the money, just in it for the thrill / Living in the moment, paying for the kill / Golden grill of sadness, mid-life wasted youth / Always ends up like this, always gonna lose.”

Their voices twine perfectly together, and Vander Gucht gets all sinewy and Isadora Duncan with her arms when she sings. In the sunlit glare of Lollapalooza, they conjured up a chill, languid twilight—which only dispersed between the tunes, when Vander Gucht broke character by squealing girlishly at the size of the audience they’d drawn for their first Chicago festival, and West breathlessly enthused, “We didn’t expect to see anyone in the crowd, so this is incredible!”

The highlight of their set was the hypno-pop grandeur of “Without You,” which exhibits both their gift for melody and their bravura way with a turn of phrase. “Come back into the good life / Lose these hazy love lies / I’ve been chasing my mind / Lonely in the cold nights.”

After that, it was off to the Bud Light Stage for FIDLAR (an anagram for Fuck It Dog, Life’s a Risk), who are often called a skate punk or garage punk band, but who are basically your straight-ahead rock ‘n’ roll guitar group, and who completed my arc across the emotional/spiritual terrain, landing me at sheer, anarchic abandon. No politics here, and no poetry either; at one point front man Zach Carper announced, “The next song’s about drinking beer,” which pretty much pegged the tune’s ambition exactly: “I drink cheap beer,” the lyrics go; “So what? / Fuck you.”

What FIDLAR is all about is blazing, daredevil guitar solos, of the kind that can scrape the marrow right out of your bones. It was clear this was what their outsize following came to hear (and you had to want to hear it pretty badly, as there wasn’t a scintilla of shade anywhere near the stage) and they went away happy.

I shouldn’t give the band short-shrift on message, either. Later in the set they grew grimly reflective, as in “Max Can’t Surf”: “I smoke weed if my baby lets me / Or I won’t get laid… And Max can’t surf / Max can’t surf / He gets real stoned and tries to make it work / But God knows, he’s got no balance / Swimming with the dolphins / Jamming with the turtle / Don’t give me no shit, I’m a full grown man / Trying to do the best I can, dude.” They even tossed off some pretty respectable samples of genuine wit: “I’m a special individual, I don’t need no plan… I’ll never sell out, man! / Wait… how much?”

So there it was: my Lollapalooza arc, completed. I stuck around to sample a few other acts during the day, but my journey was essentially completed after those three consecutive sets. My only regret is that they weren’t in the opposite order; I’d rather have started out with the profane and ascended to the sacred. Because when it comes to achieving catharsis… well, Sir the Baptist had that box ticked all by his lonesome. If there was ever a closer, it’s this guy. He’ll send you home on a wave of pure possibility.