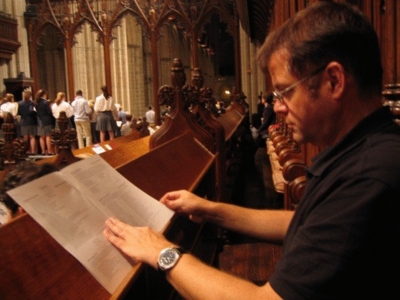 Although Richard Childress has lived and sung in England for twenty-five years now, he grew up near Chicago—even if he admits that he was always “a bit of an Anglophile.”

“I went to St. Olaf College in Minnesota where there is a big choral tradition,” he recalls. “I remember they did the Purcell ‘Hear My Prayer, O Lord’ and it was so slow, so powerful, so sustained and so incredible; that’s what kind of set me off on the English choral music tradition. Then I went to the music library and started listening to recordings of British music, particularly those by King’s College Cambridge and the then-brand-new King’s Singers, which was the original incarnation of the King’s Singers.

“I listened to Tallis and Byrd and to the way English groups sang it, which was in a completely different way than the St. Olaf Choir which had seventy voices and created this carpet of sound. They could go into the most dead acoustic in the world and they almost create their own acoustic with those seventy voices. But in English choirs, it’s a much different sound: it’s a leaner sound, a slightly cleaner sound in the sense that there is not usually as much vibrato.

“I decided that I would really love to do this music: I love this music, I love the sound, especially when you have countertenors singing it, which is an English thing. There are many more countertenors now in America than there were then, but at that time, there were no choral countertenors in America. I think Chanticleer was the first group to do that and they were formed in 1980 and that was quite groundbreaking.”

After Childress graduated, “there were a bunch of us singing at Holy Name Cathedral, who also liked early music. One of them was the alto Anne Heider. So we got some people together and just sang through music. We didn’t really have a plan to present any concerts or anything but then we decided, ‘Well, this sounds pretty good, maybe people would pay money to come hear us.’”

His Majestie’s Clerkes gave its first concert in April 1983. “It was in Quigley Chapel and there were about twenty people in the audience. But they loved it. I think there were nine of us originally and by the time of the concert, I think it had grown to more like fifteen people or so. It ultimately grew to about twenty-four down the line, eight people in each section. 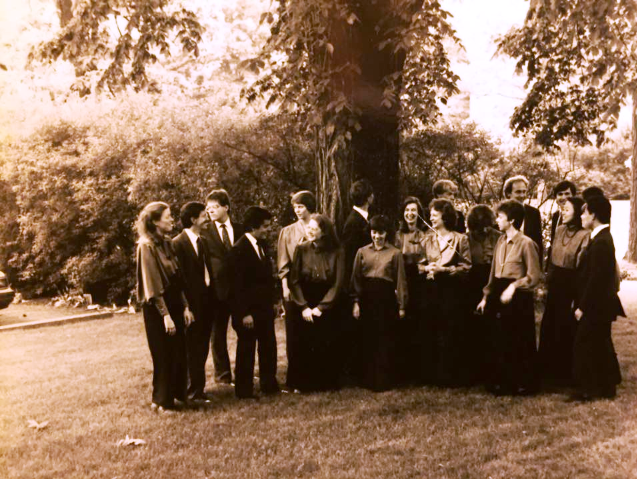 “Then I asked Anne to co-conduct because we could just do more performing: she could conduct, I could sing, and vice-versa. Anne brought different facets of the repertoire in, a lot of contemporary music, a lot of early American music, which was fantastic. We had voices that worked really well together. And we brought in British guest conductors such as Paul Hillier and Sir David Willcocks, who later helped me realize my dream of singing in a British choir. At that time, it was an unusual sound in Chicago. I just tried to make it have a sound like English choirs made. It wasn’t everyone’s cup of tea but we started getting a lot of followers who liked the sound. We did more and more music throughout the eighties and then when I moved to England in the early nineties, Anne took things over but they eventually dropped the name and became Bella Voce.”

Did the name change bother Childress? “Well, Anne wanted to change the name because we weren’t doing that much early music anymore. From that view, it made sense. It was a couple of years after I left before the board decided to change the name but I had no problem with it: it wasn’t my group anymore.

“This new group is going to be doing a lot of early music, however, but I didn’t originally really think of using the name, I just thought I would like to start a new men’s vocal ensemble with four to six singers. Then someone said, you should use the old name of His Majestie’s Clerkes, it would instantly attract more attention. So I talked to [current Bella Voce artistic director] Andrew Lewis and I talked to Anne and they said, ‘Yeah, go ahead and use the name. No problem.’”

“The idea was I’d lived over here for twenty-five years and done all this singing and a fair amount of conducting and have had lots of great experiences and I just wanted to bring something back to Chicago and give it all back, you know? Hopefully, the training that I’ve had in England would help me to create this new group back home.”

If the August timing of the inaugural concert of the rebooted His Majestie’s Clerkes seems odd, Childress remains a full-time countertenor at Winchester Cathedral.

“My job at Winchester involves me singing until the third week of July. I usually come back to Chicago for about four or five weeks and many of those summers, I have led a choral choir camp at St. John Cantius Church, which is where this concert will take place. My family and friends are still in Chicago.”

Is Childress concerned about comparisons to the original His Majestie’s Clerkes? “This new His Majestie’s Clerkes is not a chamber choir, it’s a vocal ensemble. There is no conductor, it’s a different identity, really. And it’s men’s voices from Chicago, England and New York. There are times when we might add a couple sopranos to the ensemble, what we do will be repertoire-driven.

“I feel that a lot of Renaissance music, probably ninety percent of it, actually was written for the exact type of ensemble that we have. Our ranges perfectly fit earlier music whereas when you have a mixed choir and you try to do Renaissance music, usually one voice is singing way, way too low for its range, and it’s usually the altos. It’s a huge problem as you want to have every voice in the most exciting part of its range.

“When you have a male vocal ensemble doing Renaissance music, you have the altos in the most exciting part of their range. You also need to have good high tenors who can do that sound properly and you have to have a good low bass. The male vocal ensemble is a fantastic medium to bring this music off. Even composers from today have written a lot for it and we’ll be doing some of those pieces as well.”

[…] be doing a lot of early music, however, but I didn’t originally really think o […]