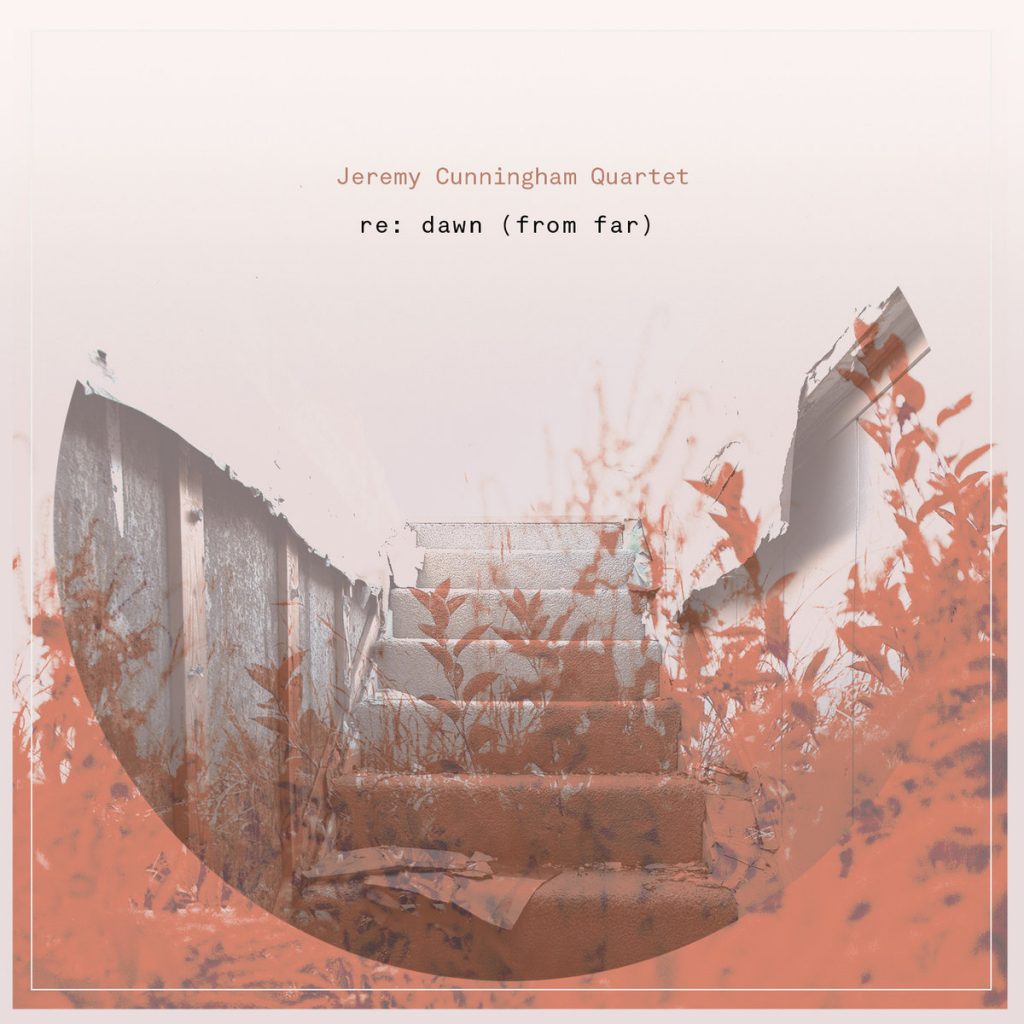 Since he moved to Chicago from Cincinnati in 2009, drummer Jeremy Cunningham has integrated himself into the city’s jazz scene in a big way—but principally as an in-demand ensemble player. That’s all changed with the debut of his own group, Jeremy Cunningham Quartet, for which he’s assembled some of the most venerated talents in town, including Jeff Parker on guitar, Matt Ulery on bass, and Josh Johnson on alto sax. On their debut release, “re: dawn (from far),” they’re joined by guests Dustin Laurenzi on tenor sax and Andrew Toombs on organ; but there’s plenty of opportunity for everyone to shine.

The disc is a seamless program that draws a genuine dramatic arc. It opens with “Bembé,” a percolating, electric, Latin-tinged how-do-you-do, with rolling, tropical drums and breezy commentary by guitar and sax; it’s a lovely ride until Parker’s solo, which starts skewing rock ‘n’ roll, riling up everyone around him.

On “Constituent,” sax and guitar take up the opening theme in synch, and it’s an appealing twinning of voices; and when, the second time through, they begin slightly to deviate, it’s a wonderfully lurching sensation. The tune is a genial amble, and the solos enjoy the space and pace to toss off some exquisitely calibrated phrasing.

“Ecliptic” begins a little more questingly; there’s a searching aspect to the melody that’s a refreshing change after the last two tunes’ swaggering self-confidence. This is probably Cunningham’s and Ulery’s best sustained performance; it’s the rhythm section’s job to provide the rhythmic spine on which the rest of the ensemble build their solos; and here they manage to keep the tune moving relentlessly along while also imbuing it with a kind of off-kilter uncertainty.

The album’s big ballad is “far from,” which boasts a gorgeous opening sax theme that conjures serenity and open spaces, and an achingly lovely sense of longing. And when Parker’s chords come tumbling in like a waterfall, it’s a longing fulfilled.

There’s also a staccato sprint called “Pulses” and a languid, almost post-coital remuneration, “Visions;” but my favorite cut on the album is “Leaves Rain.” Cunningham and Ulery bring this one in on tiptoe, soon echoed by a dissonant but insistent hushing command from the saxes, then Parker begins unspooling a melody like a cat idly unraveling a ball of yarn. It’s a kind of highly alert lethargy—a perfect evocation of the kind of lazy expectation that precedes a rainy afternoon (hence, I suppose, the title). A few smatterings of melody strive to rise to something greater, then give up and give way to a torpid, drowsy interval; but it’s a red herring. Cunningham and Ulery gently prod the tune back to life, and Laurenzi’s calls of “wake up, wake up” bring on a lovely, dissonant deluge. This is the kind of bravura storytelling and image-painting only the tightest, most simpatico ensembles can pull off. (Robert Rodi)

“re: dawn (from far)” is available through the usual channels, including the ears&eyes Records website.