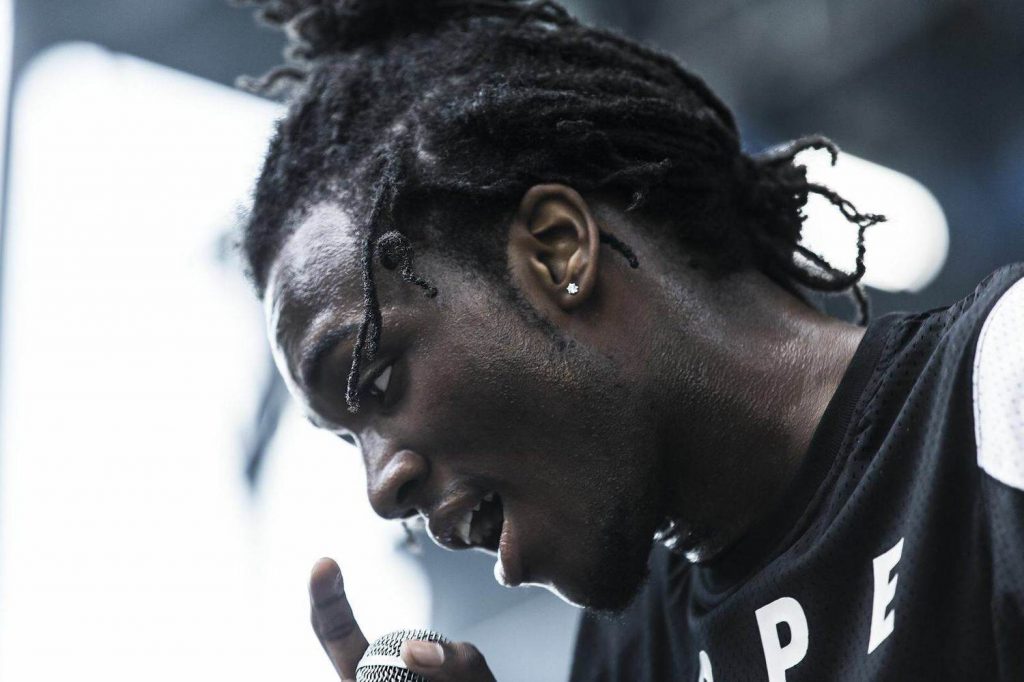 Saba has been everywhere in the past three years, so much so that he agrees to embrace the term I’ve coined for him: “sabiquity.” He might just be humoring me—it’s hard to tell if he’s really buying into the term when we speak via phone in mid-June. He’s in L.A. putting the finishing touches on his next record, which he’s hoping to have out at the end of this month. This will be his first proper album after releasing mixtapes in 2013 and 2014 and an instrumental EP last year. Saba’s sabiquity is inspired by his many guest appearances, most notably with Chance The Rapper (on both his “Acid Rap” record and on “Angels” from “Coloring Book”) and on NoName’s new record, “Telefone” (where he guests on “Shadow Man” along with Smino and Phoelix, as well as produces some of the tracks).

Saba didn’t come out of nowhere to suddenly be everywhere. Before he was Saba, he was Tahj Malik Chandler, born and raised in Chicago’s Austin neighborhood, and if it seems like his rap and production talent is prodigious, that fits, in that he was something of a prodigy. He started making beats not long after he learned the piano at seven, started high school at twelve and graduated with a 3.5 GPA at sixteen. He attended St. Joseph’s in Westchester, just like his older brother, rapper Joseph Chilliams. Along with their cousin, rapper John Walt and high-school friend MFn Melo, they started the Pivot Gang (so named for their goal of “taking one step at a time and to always make progress,” inspired by an episode of “Friends,” believe it or not), frequently collaborating with each other on music and mixtapes.

Today, the Pivot Gang has garnered a lot of respect from their fellow Chicago hip-hop crews. Rather than a rivalry there’s been more collaboration and cross-pollination than competition, in many ways exemplified and championed by Chance’s (informal) leadership of Save Money. There’s a “Symmetry” to these partnerships, to borrow the title from Saba’s latest single, released in late July. That track channels a throbbing modern R&B groove and employs equal parts singing and rapping to convey its message of chilly smoothness. There’s so much reverb on it, and so many layers, it could almost be a psychedelic Tame Impala track, and even brings to mind 10cc’s classic “I’m Not In Love.”

“Symmetry” is the first single from the “Bucket List” project. While he’s cagey about the content at this point, as he doesn’t want to give too much away, Saba is adamant that “hip-hop isn’t just about liquor, girls and fast cars.” People “have their opinions on hip-hop and what hip-hop is and it’s hard sometimes,” he says, because the public is caught up in how the genre is portrayed in the media.

It’s clear he hasn’t completed what he has to do in his “bucket list.” As Saba says in a moving documentary Redbull TV put together before his appearances at Double Door and Lollapalooza this July: “What do you want to do before you go?”

It’s apparent that “Bucket List” was inspired at least in part by the death of his uncle, who he says was like a father to him, at least until he went to prison. His uncle had been released, but shortly thereafter died in his sleep, and Saba attributes his lack of solo output in 2015 to what might be termed a crisis of confidence. But while writing and recording “Bucket List,” Saba says he “just dove in and trusted himself, trusted the process, trusted everything.”

You can also trust his instincts with the shows he recommends for Newcity’s Fall Arts Preview.

Eryn Allen Kane, September 11 at Lincoln Hall, 2424 North Lincoln: ”Keep an eye out for Phoelix on keys, he contributed to my ‘Bucket List’ project, and you’ll be hearing a lot from him in the coming months.”

Magnificent Coloring Day with Chance the Rapper, September 24 at U.S. Cellular Field, 333 West 35th: ”Hip-hop at a baseball field, this should be fun.”

Jazz Cartier and Larry June, October 21 at Concord Music Hall, 2047 North Milwaukee: ”Went on my first European tour earlier this year with Jazz Cartier and it’s safe to say his energy is among the best.”

Wordplay Open Mic, every Tuesday at Young Chicago Authors, 1180 North Milwaukee: “The city’s longest-running open mic, and one that played a major role in my development as a writer and performer. Check out some of Chicago’s young talent here every Tuesday.”

He’s too modest to mention his next gig, so I will. Saba appears with fellow Chicago hip-hop up-and-comers Joey Purp and next big thing Ravyn Lenae in a North Coast Music Fest aftershow, September 3 at Bottom Lounge, 1357 West Lake. Doors open at 9:30pm, the show is 18+ and tickets are $18 plus service charge.