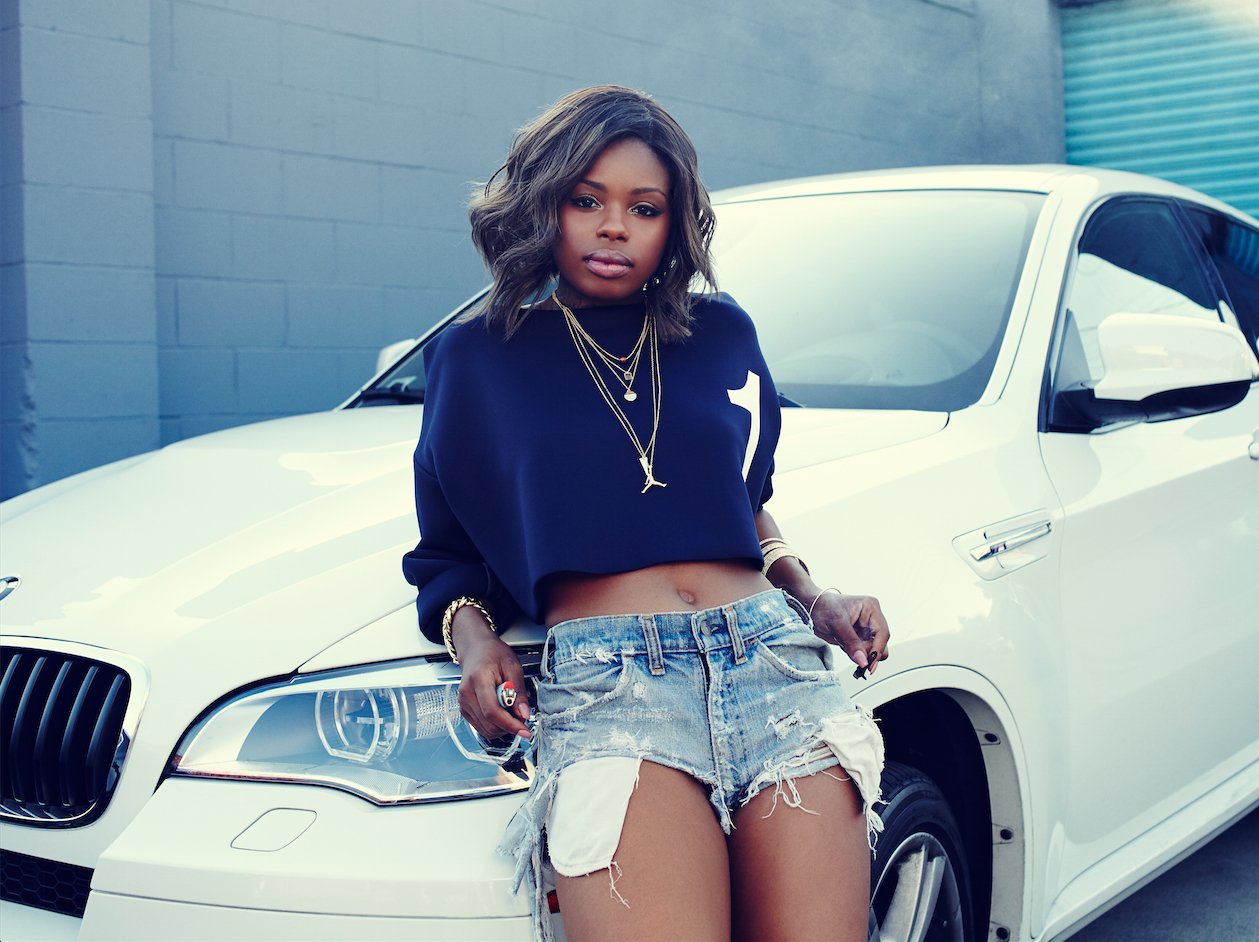 Dreezy (born Seandrea Sledge) shares a few minutes in a stairwell backstage at Lincoln Hall before she’s slated to provide a guest verse during AlunaGeorge’s Lollapalooza aftershow in late July. Along with fellow up-and-coming female rapper Leikeli47, she’s featured on the newest single from the British duo, “Mean What I Mean,” a sophisticated but danceable anthem that thematically might as well be subtitled “No Means No.”

Even though Dreezy only turned twenty-two this spring, she’s been rapping for seven years, and she’s been doing music her whole life. “I’ve been writing since I could write, [since] maybe about seven years old, writing poems, stories, songs,” she says. When she was a little older, her music teacher taught her how to sing and properly use her voice, and “rapping I kind of picked up on my own because I was a writer.”

Dreezy points to Lil Wayne as her number one hip-hop inspiration, but also cites Kanye West, Drake and J. Cole. But she’s not just a rapper; if anything, her first solo full-length, “No Hard Feelings” (Interscope), which had just dropped the previous week, gives equal time to singing. For that part of her inspiration, she says she listens “to a lot of old nineties R&B like Boyz II Men, Anita Baker, Alicia Keys, Lauryn Hill, a lot of dope artists that I probably didn’t know about as much then,” given she was born in 1994. But she says her parents were “always playing this music around me, and maybe it rubbed off on me.”

She says mom and dad have been supportive—“as long as I ain’t talking no B.S., as long as I’m giving real lyrics and coming hard, that’s all my daddy be wanting me to do, he don’t want me to be no soft rapper, he want me to come with real lyrics.” She clarifies that her father hates when he listens to rap and he can’t understand the words: “He just wants me to be clear, and come hard and come with a message and come with some content and I’m going to take it serious.” She says that conversely, her mother likes her smooth stuff, songs that she can “step to,” referring to the Chicago dance tradition.

Dreezy cites “Close To You” on the new record as one of her mother’s favorite songs. The track is undeniably smooth; but it’s such a hot R&B ballad, it smolders—and a guest appearance from T-Pain dials up the temperature to near boiling. Similarly, “Body” employs a duet with Jeremih to channel the sexiness, although it oozes bubbling cool as opposed to catching fire like a torch song. It’s a testament to Dreezy’s singing pipes that she brings to mind Rihanna on this song; she may be short of stature and come off as a little reserved at first blush, but she’s got confidence to spare, and throughout “No Hard Feelings” her abilities are evident in both singing and rapping departments. Perhaps the best balance of both approaches are exhibited on “Afford My Love,” which features Wale, on which she sings “I’m not that easy, you should know Dreezy.” The best rap duet is on the carefree cruising anthem with Gucci Mane, “We Gon Ride,” the most recent single, which concludes with Dreezy spouting the confrontational line, “Who I sound like now, bitch?”

The good news is she doesn’t sound like anyone on “No Hard Feelings.” While the subject matter of love and money may seem familiar, and the language wades waist-deep in the now obligatory “niggas” and “bitches,” the content is delivered in a fresh and original way. The production is lush and compelling without being too busy and the way the record is sequenced (and interspersed with skits) tells an interesting story.

Dreezy first gained notice when she was featured on a Sasha Go Hard track in 2012, and in 2014 garnered a national buzz when she turned around a more locally authentic remix/rewrite of Nicki Minaj and Lil Herb’s “Chiraq” in under twenty-four hours. At that point she had also worked with Lil Durk, Mikey Dollaz and Common, and she was tapped to guest on the latter’s most recent release, “Nobody’s Smiling.” Now, with two solo EPs and her first major-label full-length under her belt, Dreezy still feels like she’s “got a long way to go,” yet “slowly but surely, I think if you’ve been a fan of my work and you’ve been paying attention, you would already know that I have what it takes and I got the potential.”

Although hip-hop has always had a few female representatives, they have been far between, and with the exception of Da Brat and Psalm One, and more recently Sasha Go Hard and Katie Got Bandz, Chicago’s hip-hop scene has also been heavy on testosterone. Even though Dreezy professes to be a fan of Nikki Minaj earlier during our talk, she clearly is not out to imitate her, and thinks that’s a trap for other potential female rappers too. “There probably was a time when there was just one person that people just wanted [to emulate] and honestly maybe it’s because females wasn’t coming hard enough. I feel like I’m not even at the peak of my career. I know I could go way harder than what I’m doing now… I gotta build up and it takes time… a lot of females gotta come with it, you know? Now they got a chance and an opportunity to get their voices heard. It might be harder, but at the same time, we have our advantages too.” Dreezy’s record release was followed closely by new albums by Noname and Jamila Woods and an EP from Ravyn Lenae, all of which will hopefully add fuel to Chicago’s growing female-led hip-hop fire.

When our conversation concludes, a text from Dreezy’s publicist says “they gotta put her ears in.” Dreezy poses for some pictures with AlunaGeorge, Leikeli47, dancers and company, and I step out to the balcony to witness the world premiere of the “Mean What I Mean” video. Dreezy fits in well in the video, her verse is strong, and it’s clear that she means what she means too.