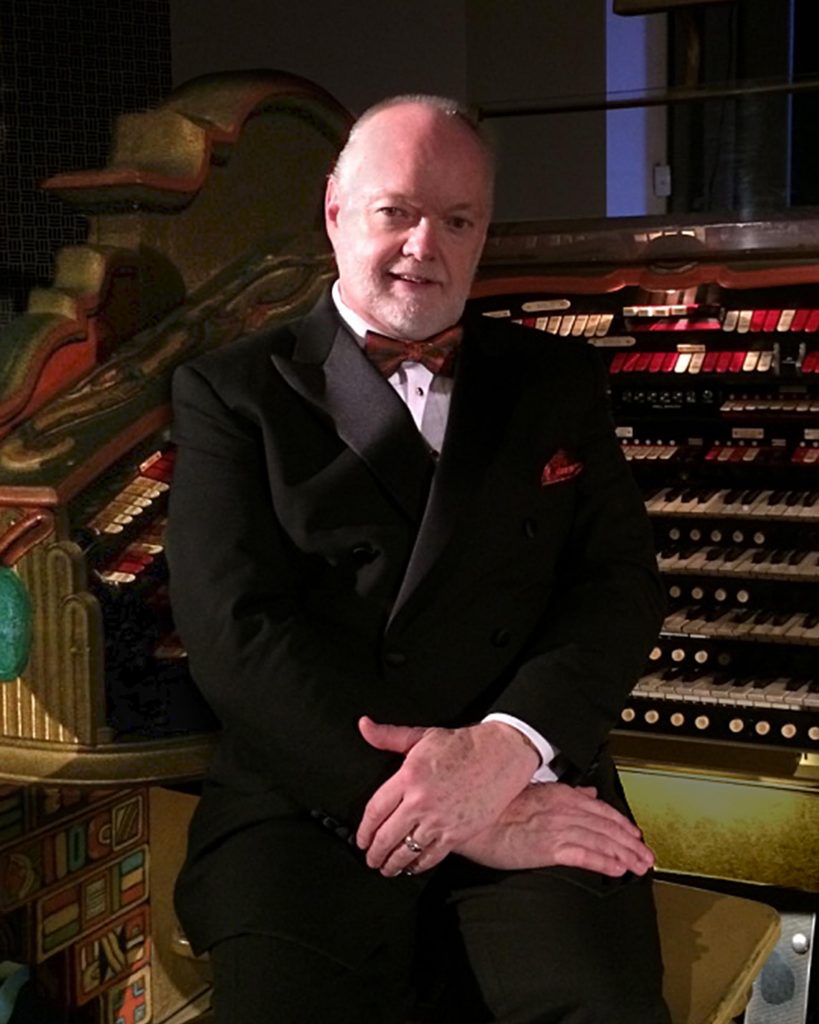 “Do you believe in reincarnation?” Dennis Scott asks me between intermissions, as we sit in the Music Box’s new lounge area. “I’ve always felt like I’ve been here before, and done this before. I’ve never felt this way about any other place.” The Music Box Theatre’s house organist has had an attachment to organ music since he was a ten-year-old kid, when he was given an eighty-rpm Edison Diamond Disc phonograph that still plays with the same diamond needle to this day. He’s also had an attachment to Chicago since 1955, when at age eight he made his first of many trips from Tulsa, Oklahoma. As a teenager, he could listen to an organ record and perceive not only who was playing, but in some cases the brand of organ, and where it resided. He began teaching himself how to play at thirteen; two years of formal lessons followed, but he remains largely self-taught.

He played his first music gig at Chicago’s iconic Green Mill in 1974, long after organ music had gone out of vogue. Now nearing seventy and still glowing with a balance of youthful enthusiasm and focused discernment, he’s enjoying a prolific career as a world-renowned organist, having played throughout the Midwest, South and West Coast on some of the largest and most prestigious theater organs, as well as pipe organ-equipped pizza parlors and singing clubs.

Since 1992, Chicagoans have found Scott playing weekend intermissions at the Music Box, as well as providing live theater organ scores for silent films. With the space in between, he works events in odd places like Painesville, Ohio, and Grand Ledge, Michigan; he also records organ scores for DVD issues of restored silent films by artists like Mack Sennett and Buster Keaton.

Scott’s South Side Chicago home, which he shares with his husband Thom Day, boasts a recreated speakeasy in the basement, complete with various vintage organs that dwarf the quality of some that are active in modern theaters. Sitting with the Oklahoma native at the bar of this basement-qua-Shangri-La, I find no trace of a Southern accent; but an unmistakable aura of Southern gentleman comes across as he describes, both avidly and articulately, how difficult it was to research and create an authentic score to a particular Japanese silent film, or a silent Native American “docu-drama.” The latter he peppered with tricks, like making a thunder sound through a combination of voices on the keys, including bells, chimes and sometimes xylophone. Little melodic themes or motifs are specially crafted for the characters; and contrary to what some may believe, Scott aims only to complete the illusion of a film, so that people will forget to listen to the score.

Scott’s speakeasy is backlit by a mirrored, fully stocked bar from which miscellaneous ceramic, archaic, painted glass figurines smile at me. Cabaret-style tables with red-and-white checkered tablecloths and a smattering of actual theater seats provide the view for shiny vaudeville curtains on the makeshift stage. The walls are lined with yellowed black-and-white photos of bygone stars and Chicago organists from the twenties, such as Jesse Crawford, Pearl White and Edna Sellers. The wood paneling of the walls blends nicely with the trio of vintage organs that sit snugly, with perfect wood finish in the foreground. Two are Wurlitzer pipe organ consoles, a two manual and a four manual, and a vintage 1936 Hammond organ. 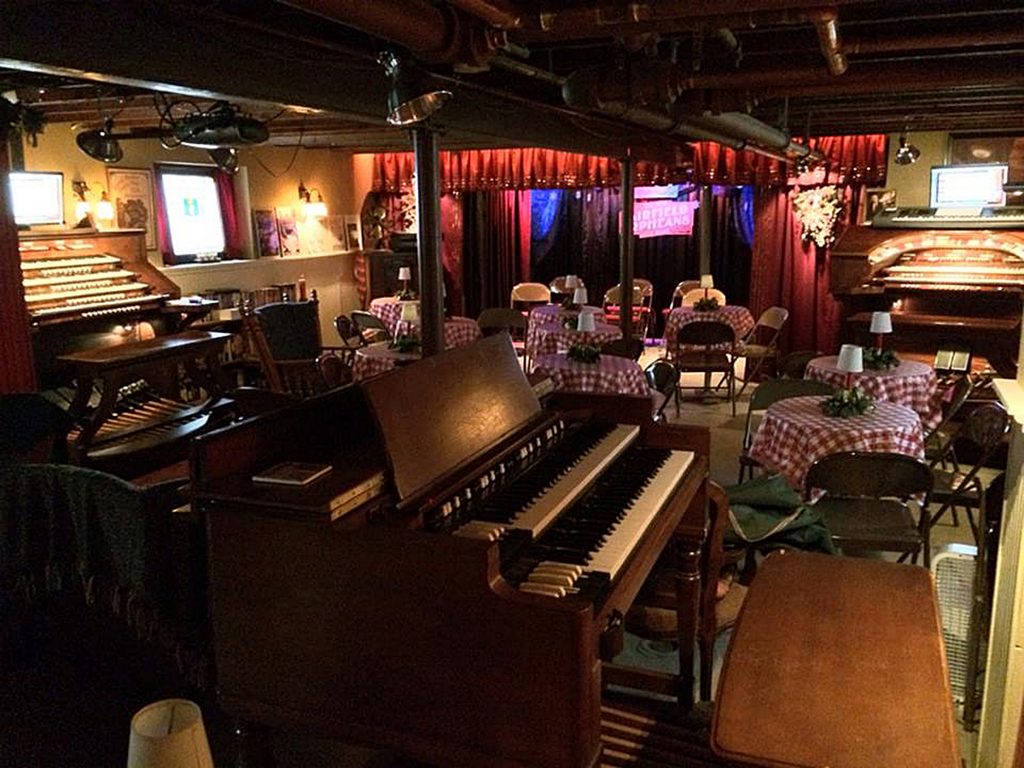 With Scott at the Wurlitzer, swirls of simultaneously haunting and romantic sounds echo through the room. Scott wrangles all sorts of numbered “pistons” in addition to his keys, shimmying his feet between pedals and “toe studs,” bursting crazy, antiquated percussive sounds. It looks more like operating a spaceship than playing an instrument. There are some modern implements—a modern fridge, a computer…but there’s a sense of escape, the unavoidable sense of atavistic return to form. The digital stimuli and up-to-the-minute “age of entitlement” ephemera feel utterly vanquished in this place.

As Scott points out to me, the Music Box is regarded as a last bastion of traditional theaters in Chicago. In years past, it was regarded only as a neighborhood house compared to the grandiosity of the city’s many giant movie palaces. Still, the Music Box stands as a reminder of a lost phenomenon: atmospheric theaters, most built in the 1920s, designed to look like rich European courtyards or the outskirts of a castle at dusk, with ceilings painted midnight blue and cove lighting to give the illusion of a robust night sky.

Over a glass of wine, Scott tells me that the original theater pipe organs in general had pipe chambers on each side of the theater’s stage, hidden behind ornamental grillwork, channeled throughout the building. In short, when a theater organist played, their pedals cued “swell shades” and other things, and basically the entire theater was the instrument. Ironically, the Music Box was built with pipe organ chambers but never had an actual pipe organ. It opened in August 1929, just after the silent era had ended. Paradoxically it is now the only theater in Chicago today to present silent films with live organ music on a regular basis.

In our conversations, over several meetings, Scott often lamented that he is “constantly looking for a crank or a lever” to operate newfangled devices. To me, he is one of the last bastions of true sonic craftsmanship—music that was influenced by the notion of a lone magician, on contraptions that weren’t made on an assembly line. This experience is something that you cannot download.