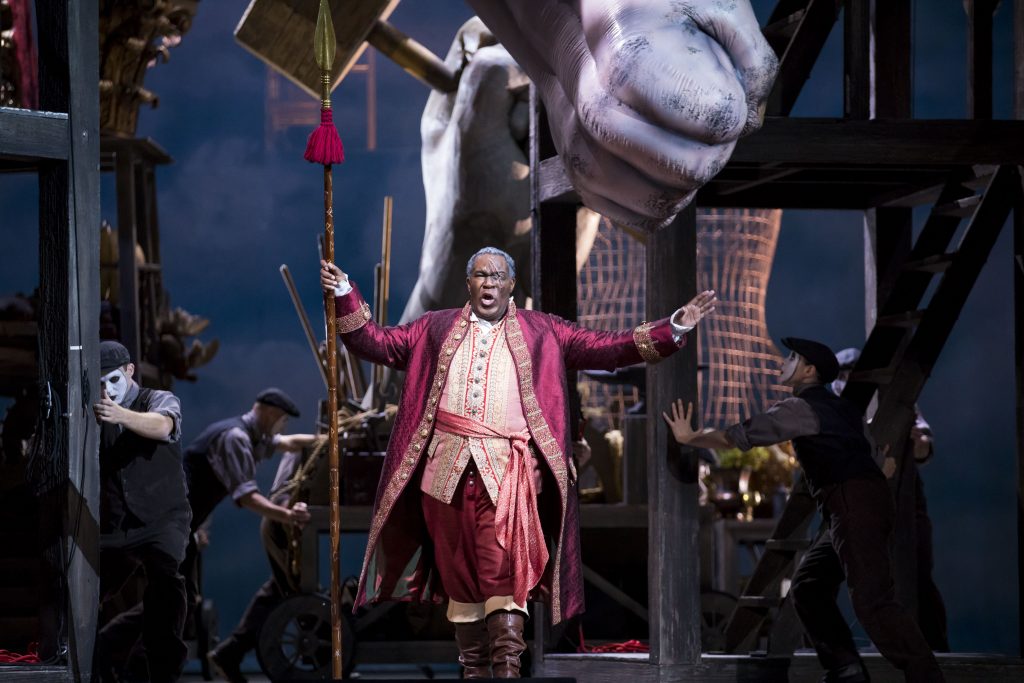 When Lyric Opera announced in early 2014 that it was mounting a new Wagner “Ring” cycle from 2016 through 2020, it was also revealed that bass-baritone Eric Owens would be making his much-anticipated role debut as Wotan, King of the Gods.

“There wasn’t any grand plan to end up in this repertoire,” admits Owens, relaxing backstage after a day of rehearsals for “Das Rheingold,” the prologue to the cycle. “It just kind of happened. I didn’t see this coming at all. When I was younger, I didn’t have a voice where people said, ‘Okay, he’s going to be a Wagnerian,’ like you might hear of baritones whose voice lies a little high. That wasn’t anything in my mind or anybody else’s mind. Even though I have been a lover of Wagner’s music since I was a teenager, I didn’t have designs on that because I didn’t know that was going to open up to me.”

Where did the idea come for Owens to start singing Wagner? “That was Peter Gelb,” he says, speaking of the general manager of the Metropolitan Opera. “He saw me do this Julie Taymor production called ‘Grendel’ that she and her partner Elliot Goldenthal co-wrote where I sang onstage as a monster all night long. That was in late spring 2006, and Peter was getting ready to take over the Met that fall. They were subsequently putting together a new ‘Ring’ cycle and he thought I would be a good Alberich, so they asked me to learn a big chunk of it. It was the first Wagner I had ever done. I didn’t play him in a typical way that people play him. I don’t know if that was just blind ignorance, I just knew that I wanted to sing the role and not bark all night.”

That production, which was seen in movie theaters on the Met’s Live in HD series and subsequently broadcast on public television, released on DVD and Blu-ray and won a Grammy Award for Best Opera Recording—his second, following John Adams’ “Doctor Atomic”—created offers for Owens to sing Wotan, one of the most daunting vocal challenges in the repertoire.

“I turned down some offers to do the role that would have been all of them at once. I wouldn’t want to be having a ‘Rheingold’ rehearsal in the morning and a Wanderer rehearsal in the afternoon. I wanted to get to know one at a time so I can figure out what the hell I’m doing and take it from there. I’m not getting a full-blown taste of it yet, but come [next season’s] ‘Die Walküre,’ we’ll see if I’ve made an error in judgment,” says Owens with a booming laugh.

“It’s funny. I’ve heard so many different people doing it so many different ways but for me, all of it has to come from a place of bel canto or else, you can’t get through it. I can’t start grinding gears and let things run amok and really grab onto this text and just spit it out there and technique be damned. My lieder singing has taught me it all has to come from a place of legato, meaning that everything comes from somewhere else. So the note you just left and the next note you’re singing is going to have a connection to the note before it: you know, like a string of pearls; they’re not fused together. It’s got to have an engine, it can’t be just a bunch of rocks thrown at a window. It’s got to be more like a net with these knot points. Think of the way thoughts arise out of your mind, it may not come out all at once, but there is a connection to what just happened.

“These are the conditions under which to do this, one work at a time before putting them all together. And [Lyric] is a company that I love and that I had done a bunch of stuff with already. So when I knew this four-year project was coming up, I said, ‘You know what? I’m just going to move to Chicago.’ When I leave here after a rehearsal or performance, I’m not going to some corporate apartment piece-of-shit bed. I’m going home to my own bed during the process of a role that’s really tough and involved and that I need to have my wits about me and have the comforts of home as I do it.”

Owens basing himself in Chicago means he is a more regular musical presence here, including recitals, performances with Music of the Baroque and with Riccardo Muti and the Chicago Symphony Orchestra. Would he like to do more? “Oh God, yes, it’s always great to work at home. You don’t have to get on a plane and stay in a hotel. Jesus, that’s great. You know, I got called to do a jump-in for the [CSO] Bruckner that ended the season. The guy couldn’t get a visa and they called and I’m like, ‘I’m right up the street.’”

It also has meant that Owens regularly accompanies Muti to juvenile detention centers. “When Maestro Muti first came here as music director and announced this initiative, it was not a publicity stunt. He wants to take music to where people are, to places where our music probably can’t seem more far away. For him to ask me to be a part of that, of course I’m going to do it because first of all, it’s getting to work while he plays the piano: this man plays piano like nobody’s business. A lot of people don’t know what a monster he is on the piano. But also, my heart tends to be in the same place. He’s really engaged to reach out and be able to share music with everyone, with people who might be considered the least among us. He’s there to let them know, ‘No, you’re not. And let us share this with you.’ It’s an incredibly special thing. What I am so impressed with is his uncanny ability to not talk over anyone’s head but not dumb anything down. I watch him talk to them and I’m like, ‘Holy crap. How is he doing that?’ He does it with an ease that is something to behold.”

Meanwhile, while the run of “Rheingold” is finishing up, Owens will make an appearance on Harris Theater’s “Beyond the Aria” series. Unlike the “Ring,” which has been set years in advance, Owens relishes the spontaneity of not being tied to a set program. “We’re going to have some fun; it’s not going to be all opera. We might do some Tin Pan Alley stuff.”

As for Wotan’s behavior in “Rheingold,” Owens cannot help but see a political parallel. “You know, you get all these stories in the papers about Donald Trump not paying workers and going back to renegotiate the contract to give them half of what they were owed. It’s very much what Wotan does when he promises the giants [the goddess] Freia for building Valhalla but then reneges on people building him stuff. God, this cast of characters, they crack me up. When you step outside of yourself—I mean, you have to be the character when the performance rolls around—but it really is like really bad Thanksgiving dinner where all these distant, dysfunctional relatives come out of the woodwork.”