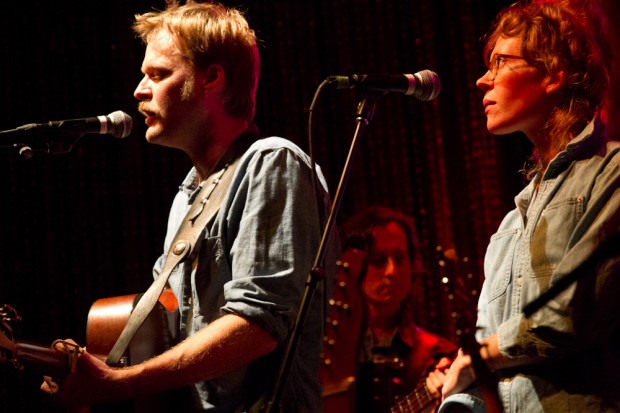 The music of Hiss Golden Messenger illustrates the point that the distance between folk music and other musical forms is not as great as one might think. Formed in North Carolina in 2007, Hiss Golden Messenger has long been more of a collective—with various temporary members coming and going—than a proper band. But guitarist, singer and songwriter M.C. Taylor is at the heart of HGM, no matter who else is involved.

Hiss Golden Messenger has released seven studio albums (2016’s “Heart Like a Levee” is the group’s latest), plus a live album, two EPs and a handful of singles. With a sound that incorporates influences from a dizzying array of styles—everything from jazz to Louisiana “swamp pop”—Hiss Golden Messenger could make a strong case for being considered quintessential Americana. But even that label is too limiting for Taylor’s songwriting and delivery.

Going back to 2008’s “Country Hai East Cotton” and continuing through “Heart Like a Levee,” Hiss Golden Messenger’s albums have consistently earned high marks from critics who appreciate the musical forthrightness within which Taylor presents his often visceral lyrics. Tracks like “Tell Her I’m Just Dancing” have it both ways, spinning out a slinky and inviting tune with lyrics that hold up well to close scrutiny.

While the group’s music is varied and textured, there’s a kind of warm and friendly campfire ambiance to many of their recordings, deepened with thoughtful lyrics and strengthened with indelible melodies. The songs on “Heart Like a Levee” explore the tension and connections between what Taylor sees as his responsibilities to his family and his music. But even when focusing on themes like guilt and loneliness, Hiss Golden Messenger manages to set those words into songs that feel uplifting, and that stay with the listeners long after the needle hits the runout groove. (Bill Kopp)