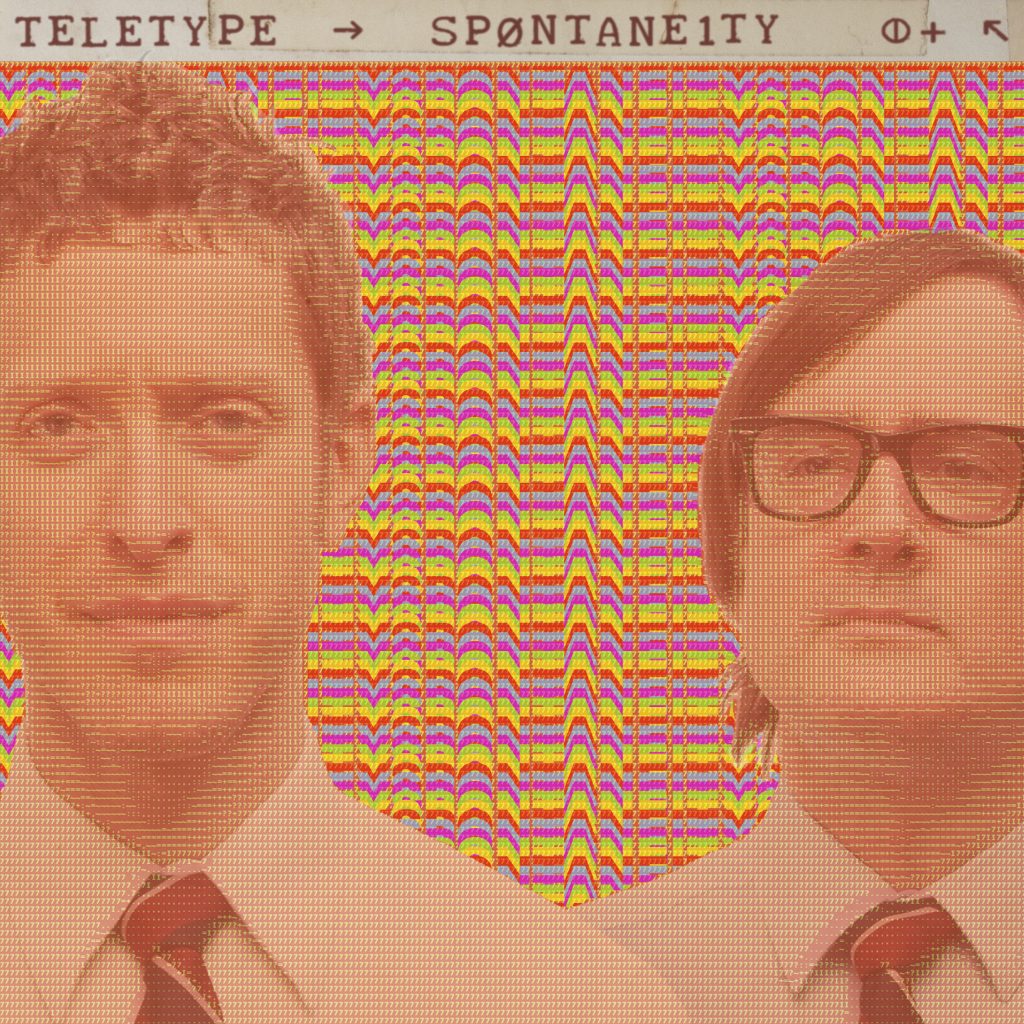 Teletype is a new project by Chicago singer-songwriter Abraham Levitan and arranger Devin Davis, and while each has his own singular sensibility, their new release, “Spontaneity,” is such a seamlessly beautiful thing that collaboration just might have been their destiny all along. It’s unabashedly backward-looking, summoning up both the un-ironic sonic splendor of seventies pop and the brash insouciance of eighties punk.

The album kicks off with “Deliberation,” a swelling, major-movie sort of theme, that gives you a heads-up on what’s to follow. Abandon your cynicism at the door, it tells you; we’re all believers here.

Which isn’t to say there isn’t genuine sophistication and hard-edged wit on offer. The first full-length tune, “No Fight,” is an irresistibly hook-laden, uptempo number about despair and defeat; it’s pure eighties-style synth pop, with lyrics that could’ve come from Elvis Costello or Leonard Cohen. “Death and disease, you’re on your knees / Alone again, exactly when you start to feel all right / Walkin’ around this hung-up town / It’s hard to know just when to go and when to stay the night.”

The lyrics are even more felicitous in “I’m Lost”—another upbeat lament that mixes a hangdog sentiment with a ridiculously infectious harmonic line, and spreads lavish, sparkling production over the whole thing, like a layer of butter frosting. “So this dog’s out of his cage / Barkin’ loud at middle age / Wants to hold some chicks in thrall / But all his tricks ain’t tricks at all.”

My favorite tune, however, is “All I Did,” which is paradoxically the most stripped-down of the lot; it’s a folk-inflected minor masterwork, and the lyrics are so good they’re goddamn chill-inducing: “I stormed your ship in battle dress / I loved you like a kid / I saved my damsel in distress / And all I did / Was hold my breath and place my bid.”

But the title tune is also pretty much sheer joy, with a percolating electronic intro and a buoyantly eighties synth riff over the drums. “My dad was so off-the-wall, he’d do whatever came to him / But me I can’t have a ball, I’d rather be torn limb from limb / And as I drift away, I’ll try not to convey / Any trace of spontaneity.” This paean to inhibition constitutes the only moment of irony on the whole album, because the tune—the entire project—sounds so exhilaratingly extemporaneous. It’s the happiest batch of songs I’ve heard in a long while; give it a listen, and get ready to smile.

“Spontaneity” is available through the usual digital retail and streaming outlets. 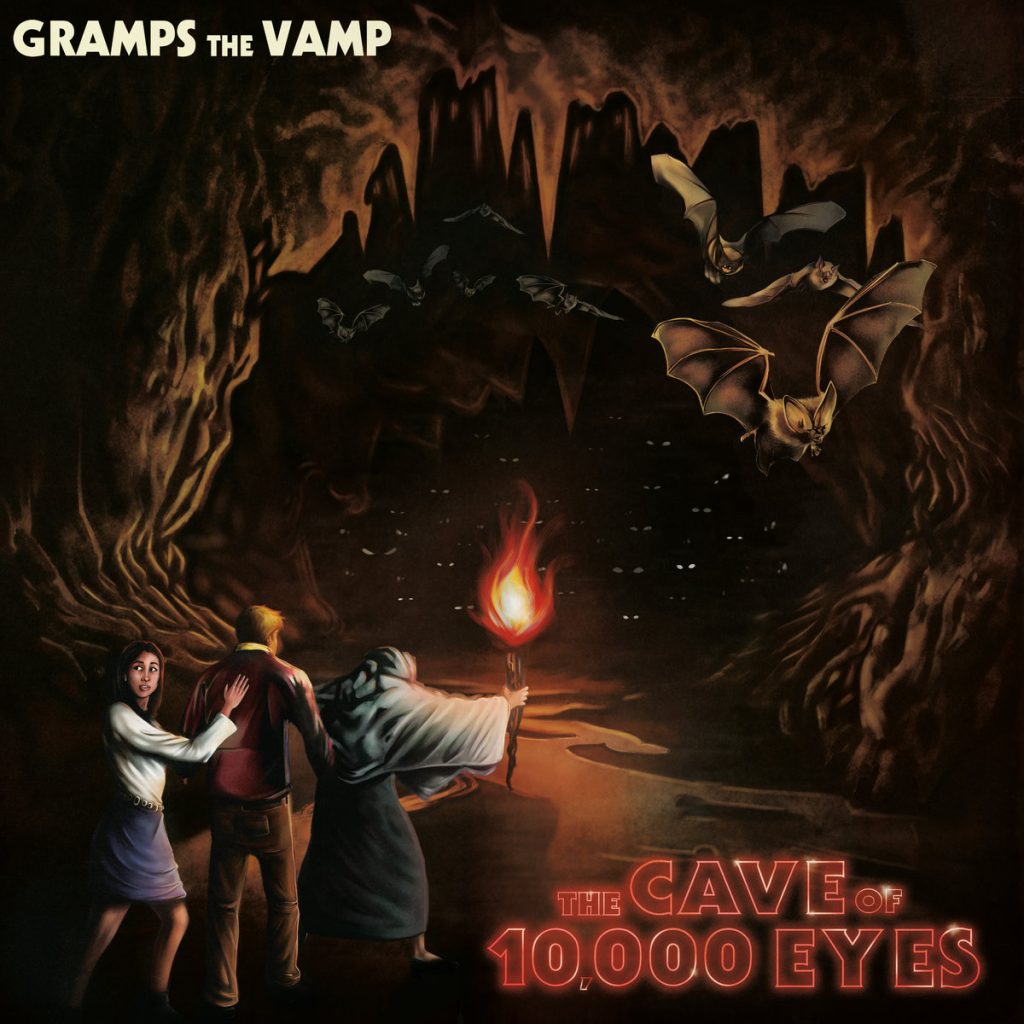 Gramps the Vamp, the Chicago band whose retro-noir stylings they like to call “doom funk” (and who can blame them) have released their second album, “The Cave of 10,000 Eyes,” which I’m sorry to be telling you about now, because it would so entirely have made your Halloween. These guys are sort of like the bastard spawn of The Munsters and Tower of Power, and this new release is just a ridiculously giddy joy ride.

“BATS!”—all caps just like that, because—well, because BATS—kicks things off. It’s a very nimble and energetic piece of gold-plated goth, with a suspense-movie organ by Maxx McGathey and an absolutely killer horn section; I was particularly wowed by the undead-wailing tenor-trumpet solos of Justin Howe and Peter Gillette. Midway through, the tune comes to a dead (pardon the pun) halt, to allow Gillette’s trumpet to sputter in incoherent terror for a few minutes; I don’t know if there’s a video for this tune, but if so it’s a little redundant as the track pretty much creates one in your head.

McGathey’s über-spooky organ is back in “The Incident,” if only to usher in a more straight-ahead funk number. I’m not sure what the incident in question is, but given the way these horns throw down, I’m pretty sure it involved busting some seriously righteous moves. A danse macabre, maybe, with pimp-walking added in.

In “Krampusnacht,” McGathey’s deceptively innocent intro on celeste gets pretty quickly devoured by (again) McGathey’s organ and Kevin Holt’s merciless bass. Gillette’s trumpet is so crazy here, it almost sounds like it’s speaking in tongues (even more alarming, by the third or fourth listening you start to understand what it’s saying). Then everything goes all funereal, till Stevenson Valentor’s furious drumming stirs things up again.

The album’s title tune sneaks in a bit of Slavic-style orientalism; the horns are all over it, and at one point McGathey provides a theremin choral line that’s both delightfully on-point and slightly hair-raising. These guys are having so much indecent fun in their playground-slash-graveyard, it’s contagious. But it’s an infection I highly recommend.

“The Cave of 10,000 Eyes” is available through the usual digital retail and streaming outlets as well as their website.