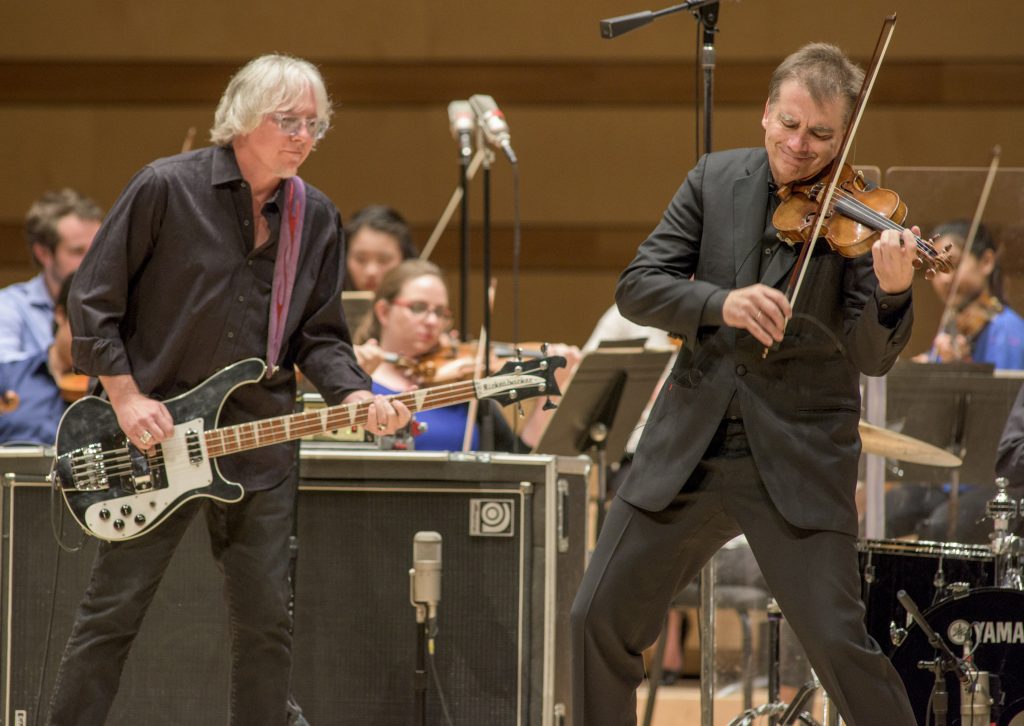 After you’ve spent a quarter-century as a member of one of alt-rock’s most influential bands, you don’t have anything left to prove. But if your drive to create remains strong, you look for ways to channel that energy. In the case of Mike Mills, bassist for R.E.M., this means composing a new work called “Concerto for Violin, Rock Band and String Orchestra.”

Working with violinist Robert McDuffie—he and Mills have been close friends since their childhood in Macon, Georgia—and arranger David Mallamud, Mills has written a six-movement piece that truly brings together the best qualities of rock ‘n’ roll and orchestral music. The work premiered in Toronto earlier this year (“I was a basket case,” says Mills); a performance in Rome followed, and then one at the Aspen Music Festival.

Mills is now in the midst of a fourteen-city tour; the performances feature McDuffie’s violin serving as a kind of “lead vocal” for the instrumental piece. “I concentrated my efforts on making the main melody of each song as beautiful as I could, and as interesting as possible,” Mills says. Chicago’s fifteen-piece Fifth House ensemble provides the orchestral foundation, and a rock band—led by Mills on bass and keyboards—gives the piece its muscle.

Composing the thirty-minute work, Mills employed a pop-songwriting sensibility, but took advantage of the expanded sonic capabilities of violin and orchestra. Writing a lengthy piece—as opposed to a four-minute rock song—wasn’t especially daunting for Mills, in part because of classical music’s use of thematically linked elements. He notes that the third movement, “Sonny Side Up,” and the last movement, “You Can Go Home Again,” have thematic similarities. “I didn’t do that on purpose,” he says. “But when I realized it, I thought to myself, ‘Should I avoid that, or should I embrace that?’ And I decided, ‘Well, there’s nothing wrong with thematic repetition, especially within a single concerto.’ So I was quite happy that it happened.”

For his first major orchestral endeavor, Mills hopes that he’ll attract fans of both rock and classical music. “Classical music is not doing very well,” he says. “Bobby and I would like to expose more rock fans to classical music, and more classical people to rock… There’s a great deal of quality to be found in either genre of music; the bridge between them is not as long as people think it is.” (Bill Kopp)