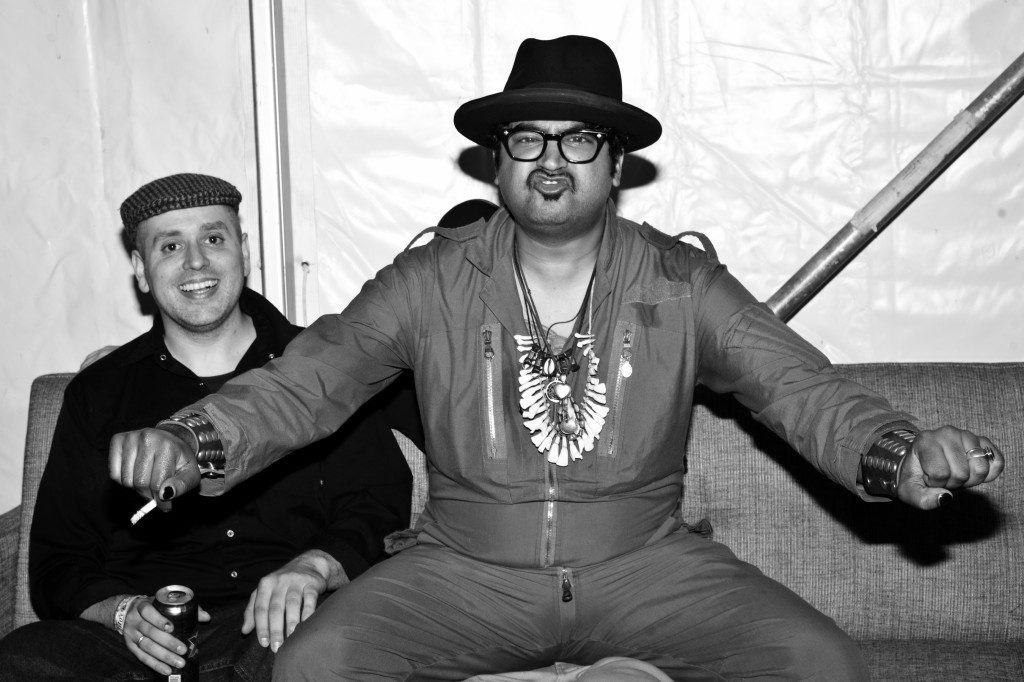 The King Khan & BBQ Show is part of a long tradition of guitar-and-percussion duos. But while their instrumental setup is the same as that of The White Stripes, The Black Keys and Local H, they don’t sound much like any of those acts; they breathe life into what in lesser hands can be a somewhat tiresome approach. They’re also far more colorful than those other duos: King Khan is of East Indian descent; raised in Montreal, he built much of his reputation playing throughout Europe. He plays guitar and sings in a wild-man style that echoes Little Richard. King Khan is equally famous for his work fronting sixties-garage-meets-James Brown revue King Khan and the Shrines.

BBQ (pronounced “barbecue,” but born Mark Sultan) sings, and plays guitar and drums. Sometimes those drums are a kit; other times they’re mounted to his foot, like Dick Van Dyke in the opening scenes of “Mary Poppins.” He played drums in the underground sensation Les Sexareenos, toured solo for a while and played with Khan in earlier bands including the Spaceshits.

Fun and aggressive, The King Khan & BBQ Show offers a stripped-down version of these musicians’ vision. A quick listen to any of the duo’s four albums–a self-titled 2004 debut, the 2006 release “What’s for Dinner?,” 2009’s “Invisible Girl” and “Bad News Boys” from 2015, or assorted singles and EPs, for that matter–clues the casual listener in to influences that include sixties punk and fifties rockabilly. But there’s more in the mix; their love of doo-wop and traditional old rock ’n’ roll is made plain.

As might be expected, they’re a pretty wild act onstage. And their music is made for dancing. The pair has energy to burn, and shows no sign of slowing down. Their current tour finds the duo crisscrossing the eastern half of the United States, with a couple of quick trips back over the border including a show in their hometown of Montreal. Chicago is fortunate to have not one, but two The King Khan & BBQ Show dates, both scheduled right near the end of the tour. (Bill Kopp)