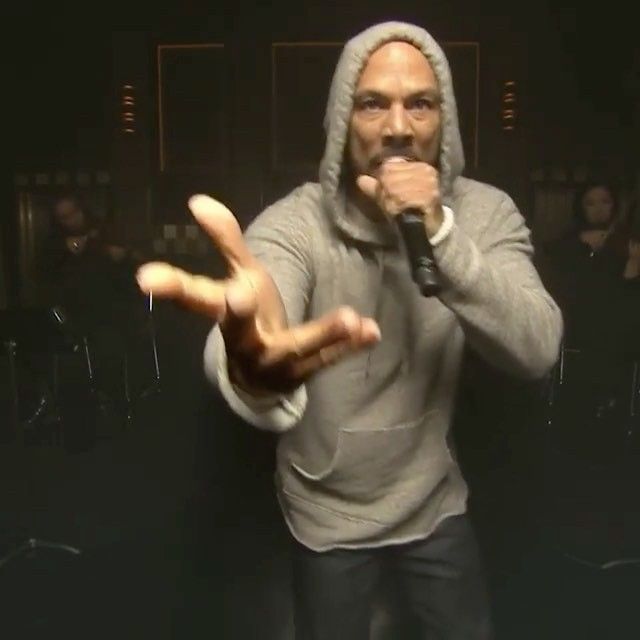 Although he now lives in Los Angeles, and it was released on November 4, Common’s new record can still be viewed as Chicago’s hip-hop reaction to the new political reality of post-election 2016.

“Black America Again” serves as the best response (so far) to the anointing of Donald Trump as America’s next leader. Mr. Trump wouldn’t understand it—he’s still incapable of interpreting direct parody (made even plainer when he tweeted a complaint about “Saturday Night Live” making fun of his tweets)—so he clearly wouldn’t follow the subtlety and complex language of Common, or indeed hip-hop in general (consider his puzzlement upon viewing a performance by Jay Z at a Hillary Clinton benefit).

Common had originally intended this record to be an EP released in summer, but deliberately chose to expand it and drop it closer to election day, in the hopes it would make a difference, he told Esquire. “I think hip-hop truly has been the voice of this time period in speaking of the times, speaking up. You’re just starting to see hip-hop artists really participate in the political campaigns and using their voices to say, Get out and vote,” and although he was referring to Chance The Rapper, his statement applies to fellow Chicagoan Vic Mensa’s recent visit to Standing Rock too.

Just as on Mensa’s breakthrough EP that dropped in the summer, there’s a lot going on in “Black America Again,” but it never comes across as random or scattershot. Rather, the record covers a lot of bases across its twelve compositions (and three interludes), not just political, but personal too, as if to say that, at long last, there really isn’t (or shouldn’t be) a difference between these two philosophical perspectives, usually considered polarities. Indeed, Common’s eleventh record is his most autobiographical, telling his story as a way of providing inspiration, he hopes.

There’s a surprising amount of hope coursing through the veins of “Black America Again,” especially compared with its 2014 predecessor, the darker (and more sonically dense) “Nobody’s Smiling.” While that record focused on Chicago’s violence epidemic (and was overflowing with local talent), this one seems to take a step back, attaching a wide-angle lens as opposed to a telephoto (and the guest list has been winnowed down too, although Bilal has a prominent place). Common’s considering big concepts like love, God, respect, pride, family, gender equality and a persistent through-line of black pride.

“Black is the color of my true love spirit” he raps on “A Bigger Picture Called Free,” on which he adopts the perspective of a man incarcerated. He imagines redemption (“Wonder if this cell got room for forgiveness?”) and release, with Syd Tha Kyd singing on the hook: “If you look in my eyes, you’ll see love deep inside / When I look in the sky, I see freedom” and Bilal concluding (at his most Prince-like here) that “the change in I is the realest high.” In other words, to emerge from this prison completely reformed and free is better than the best drug ever.

“Black America Again” is bookended with “Joy and Peace” at the beginning and “Letter to the Free” at the conclusion. The former does more than just set the table in less than three minutes; Common samples Gentle Giant’s “Empty City,” praises God above all, recounts a dream in which his father (who passed away in 2014) tells him “Things ain’t as bad as they seem” explains what a real star is, that his verses are superior since they respect God, puts authoritarianism in its place, and Bilal’s chorus posits that joy and peace can be found by turning on the light in our hearts. So that’s the first two minutes and forty-one seconds, which is pretty much just an introduction to the more weighty topics and ambitious subject matter addressed throughout.

It’s no surprise, then that “Letter to the Free,” perhaps better termed an epilogue, is even more ambitious, and even more successful. It’s really a love letter to the future, telling “black America” that it can come back again, that despair cannot keep the singing bird caged forever. It’s no exaggeration to say that Common wants this record, and “Letter to the Free,” specifically, to be America’s “come to Jesus moment”—just consider these lines:

Slavery’s still alive, check Amendment 13
Not whips and chains, all subliminal
Instead of “nigga” they use the word “criminal”
Sweet land of liberty, incarcerated country
Shot me with your ray-gun
And now you want to trump me
Prison is a business, America’s the company
Investing in injustice, fear and long suffering
We staring in the face of hate again
The same hate they say will make America great again
No consolation prize for the dehumanized
For America to rise it’s a matter of Black Lives
And we gonna free them, so we can free us
America’s moment to come to Jesus

So, yeah it’s pretty clear that Common is no Trump fan, and no fan of institutionalized slavery, also known as the Prison Industrial Complex, but there’s not a lot of other Chicago rappers old enough to remember Reagan (aka “ray-gun”); at forty-five, he’s concerned he’s seeing history repeat, if not worsen. And yet! Bilal sings the record out with the chorus:

Between these bookends, there’s even more goodness sandwiched, including moments of silliness, such as when Common professes his love of Harold’s Chicken, and imagines a world where men treat women with respect, including leaving the toilet seat down.

“The Day Women Took Over” doesn’t mention Hillary Clinton, preferring to elevate Michelle Obama, Oprah Winfrey and Rosa Parks, but it’s clear that the song would have a much different context had the former First Lady (and senator and secretary of state) become the first female president. BJ the Chicago Kid pitches in on this one.

The track ends with a scratchy piano vamp and an autobiographical spoken word piece that alludes to Langston Hughes’ “Harlem (“What happens to a dream deferred?”)” that transitions nicely into the next number. “Although tomorrow’s never a promise, I do believe in it,” Common says, and he says he was never afraid to take chances.

Common’s collaborator (along with Chicago’s Rhymefest) on the Oscar winner “Glory,” John Legend, sings lead on the torch song “Rain,” and it’s hard not to imagine this as a Grammy performance highlight, with its soaring chorus, indelible piano hook and sublime string part.

“Little Chicago Boy” contains a spoken word interlude that seems to be told from the perspective of his deceased father (“one cannot enter the gate if you hate,” he says), a passionate guest vocal from Tasha Cobbs and a sneaky flute part that could have been lifted from a Curtis Mayfield dream concluding with a benediction soundtracked by a contemplative church organ.

He aims high when schooling today’s youngsters on “Pyramids” referring to the pinnacles that his predecessors built, name-checking Public Enemy (who guests on the title track, along with Stevie Wonder and James Brown—in sampled form), A Tribe Called Quest, Prince, N.W.A., The Roots and even Alabama Shakes among others.

After repeated spins, it’s clear that putting one brother in Star Wars is not enough for Common, that we need more black generals and, as Stevie Wonder sings on the chorus of “Black America Again,” he and his cohorts are “rewriting the black American story.” As Common told Esquire, “Hip-hop is not only just saying it, but there are artists out there doing it.” He has said it best with one of the best records of 2016, but will he and his followers follow through and make a difference, at last freeing black Americans of their virtual enslavement? There’s hope.