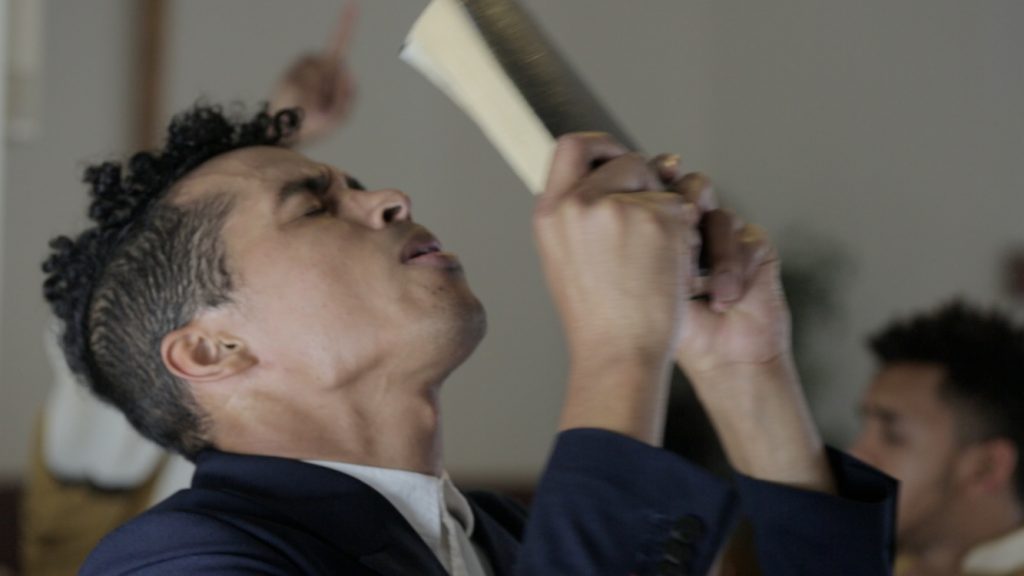 Having been a digital marketing director at ad agency Leo Burnett and having also lived in his car for a period of time, Chicago’s Sir The Baptist is “Movin,” to quote the title of the track he recorded for a new promotional video for the ride-sharing service Lyft. He’s at the Virgin Hotel to participate in a Q&A session following the debut of the animated video, “June,” directed by Oscar-winning short-film director John Kahrs, released in conjunction with Lyft’s annual award ceremony and their driver appreciation day.

Sir The Baptist isn’t just a hired gun for this project; he’s a former Lyft driver himself, and following the evening’s ceremonies he sticks around for an interview and promises that many of the tracks on his forthcoming record, part of a multimillion-dollar, multi-album deal with Atlantic, will feature songs inspired by some of the thousands of customers he transported around Chicago. “You really see in each line where I’ve interacted with someone, and I’m trying to connect them into song.” He cites lines referencing a mother getting her baby Pampers and paying a lazy landlord as an example, and says the song “Wings” is “saying give education in our community a try again.”

But the rapper born Sir William James Stokes will also have some stories drawn from his personal life on “PK: Preacher’s Kid,” his debut full-length, which, after being pushed back a few times, is being released on January 13. “You have songs like ‘Deliver Me,’” Sir says; “that’s about my sister and domestic violence, and how she was getting beat by her husband, who was the deacon in the church, and my dad being the pastor…she couldn’t and he couldn’t expose the family.” She would come to church “with black eyes…to get help, but because your dad’s the pastor, he can’t help you with some of the stuff that’s goin’ on, you have to figure it out yourself entirely.”

Speaking of the “politics of religion,” as he puts it, Sir The Baptist is trying to address how to heal those problems that have caused many to walk away from religion, “making us hate ourselves.” He refers to his gay brother as one example of how his church has not supported the LGBTQ community; “my dad said he couldn’t come to church for a long time.” On “Preacher’s Kid,” he says he’s exposing some of these things and suggesting that “if we added some sort of level of humility and human touch to it, then it would allow us to…heal people the way they’re supposed to be healed.” Another of the songs, “Heavy Dose” is about how “in times like these we need love in a heavy dose.”

Sir The Baptist has obviously given extensive thought to his stance on organized religion, saying it can be a good thing in a global or worldly context, but “the moment you segregate or market religion in a different fashion and…make certain principles and standards and make it complicated for people to be human…I feel like that’s the moment when we’ve robbed them of their liberty, which I believe Jesus gave us. The liberty to say yes or no. The liberty to accept or not to accept…now that I travel so much, I get to see so many religions…and interact with so many people, and I start to see how they’re coupled together. You know, instead of placing us against each other because I’m Catholic, you’re Baptist, you’re Pentecostal, you’re Buddhist… you have all these sort of things that separate us, and in reality I think what God wants from us is a holistic people.”

Delving further, when asked how he can reconcile Christianity’s claims of bringing people together while at the same time dividing people and being the source of religious wars, he says that “has all to do with personal agenda. See, that’s why I tell people that I’m not a Christian but I believe in Jesus, I’m a Jesus freak. Because Christianity came after Jesus and [was filtered] through all the politics of religion, but Jesus the person, and what he stands for, and what I know this Bible to be…that’s the reason why I consider myself a hip-hop chaplain, one that carries spirituality but also carries a passion for the streets. Not a profession in the streets but a passion in the streets where I can give us that holistic experience for hip-hop.”

Hip-hop may be Sir The Baptist’s medium, but it’s not necessarily his message—just a mode of transmission. He’s not in “the rap game” to win a Grammy; as he’s told other interviewers, he’s more interested in a higher goal—a Nobel Peace Prize—and explains how he hopes to achieve such a lofty aim.

“I want to write the urban Bible, and I want to expose how Jesus was a genius. And the way to do that is to show you through miracles that have happened throughout the Bible, and how they apply to human interaction, physics, education, economics and everything…See, the first thing they tell you in church is that science shouldn’t be paired with religion. I want to pair. I want to shine science on God and show how much of an intellect he is. And when I do that, I hope to solve the riddle of his people and give them something that they can hold onto and apply to life and say, ‘okay, this is the model that he gave me and he contributed to world peace’.”

Having gone from being homeless to performing at Lollapalooza, being a headliner at Chi-Town Rising on New Year’s Eve and now set to perform at Essence Fest in New Orleans this summer, and with “PK: Preacher’s Kid” dropping after a string of stellar singles, it’s clear that Sir The Baptist’s trajectory is set in such a way that not even the heavens can limit his ambitions.