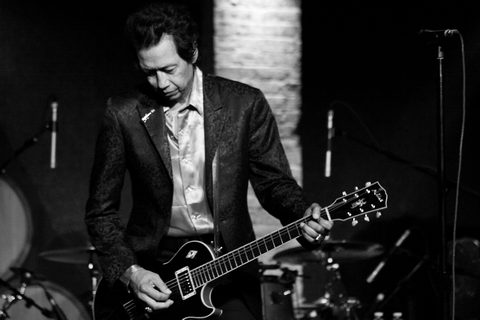 It’s true that family connections don’t guarantee the quality of an artist’s output. But when it comes to the Escovedo family, you’d be forgiven for thinking otherwise. The first of its members to come to prominence was Coke Escovedo. His percussion work was an important part of the Santana sound in the early 1970s; he co-wrote the hit “No One to Depend On.” Brother Pete was a Santana percussionist then, as well, and again near the end of that decade. Coke and Pete also led a big band, Azteca.

Brother Phil played with jazz vibraphonist Cal Tjader; Mario Escovedo led The Dragons for fifteen years. Javier Escovedo fronted The Zeros and released a superb solo album in 2016, “Kicked Out of Eden.” And of course Pete’s daughter—doing business without the family name as Sheila E—is an acclaimed singer and percussionist in her own right.

All those credits aside, it’s perhaps Alejandro Escovedo (brother to Coke, Pete, Phil, Javier and Mario) who’s the most well-known among fans of alt-rock; he came to fame in the mid-1980s as a member of Rank and File. After leaving that band, he formed the True Believers with Javier, worked with Whiskeytown on the “Strangers Almanac” album and began a solo career.

By 2003, Alejandro Escovedo had released eight solo albums, but became sidelined due to Hepatitis-C. An all-star musical project called “Por Vida: A Tribute to the Songs of Alejandro Escovedo” was put together to help offset his medical expenses. Recovery took some time, but Escovedo returned to recording and performing by 2005. “Burn Something Beautiful,” his latest album, is his twelfth studio album and fifteenth solo release overall.

“Burn Something Beautiful” finds Escovedo working with a cast of cohorts that includes R.E.M.’s Peter Buck (as producer, co-writer and guitarist), Young Fresh Fellows/Minus 5 guitarist Scott McCaughey (in the same capacities as Buck), and members of Los Lobos, Sleater-Kinney, The Decemberists and The Fastbacks. “Burn Something Beautiful” is a hip, knowing and superbly noisy slab of rock, full of chiming hooks, fret-buzzing guitars and tough vocal harmonies that call to mind Johnny Thunders and The Heartbreakers at their best. Now in his mid-sixties, Alejandro Escovedo is making some of the best music of his career. (Bill Kopp)