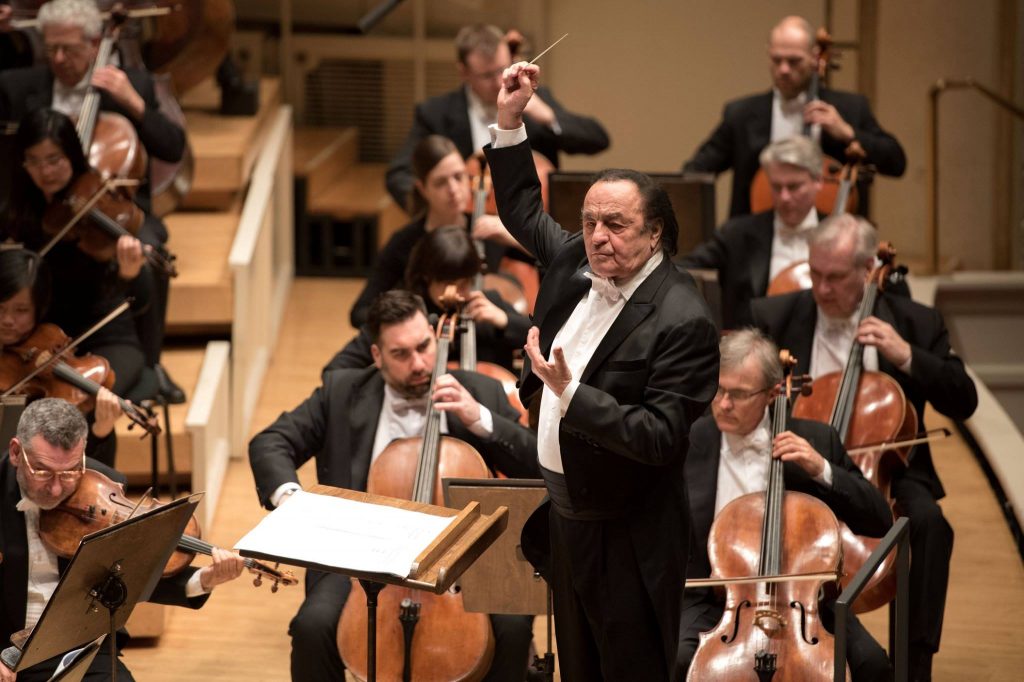 Swiss conductor Charles Dutoit’s two-week residency with the Chicago Symphony Orchestra began with the American premiere of a lost Stravinsky work, “Chant funébre,” or “Funeral Song.” A work originally composed in memory of Stravinsky’s teacher Rimsky-Korsakov, it was performed in St. Petersburg in 1909 a single time before the manuscript and parts were lost.

Decades later Stravinsky admitted he could no longer recall the music of “Chant funébre,” yet he remembered it as his most important music before “The Firebird,” which was written the following year and made him an international sensation. Over a century later, in the fall of 2015, the library of the St. Petersburg Rimsky-Korsakov Conservatory was being emptied for renovation; the parts for the lost piece turned up and a full reconstruction of the score was undertaken.

That the CSO presented the American premiere is appropriate given Stravinsky’s long association with the orchestra, which commissioned and premiered his Symphony in C in 1940, under Stravinsky himself. The composer made several guest appearances with the CSO downtown and at Ravinia, even recording “Orpheus” with it.

Dutoit’s mentor was the Swiss conductor Ernest Ansermet, one of Stravinsky’s principal collaborators and often considered his definitive interpreter.

The twelve-minute piece itself comes very much from the same sonic world as “The Firebird,” and in hindsight, seems a virtual precursor to it. It also evokes Wagner, particularly “Siegfried’s Funeral Music,” in mood and expansive chromaticism.

It is almost a somber mini-concerto for orchestra, various solo instruments called upon to, as Stravinsky recalled the concept, “lay down its own melody as its wreath” as each filed by. Unlike many rediscoveries of lost pieces by famous composers, this is an important discovery and with the ideal combination of Dutoit and CSO, was given the subdued virtuosity and poignancy that are called for.

Also on last week’s program was the Dvo?ák Cello Concerto, an overdone warhorse that was given new life by Norwegian cellist Truls Mørk, who offered a wide variety of timbres but always stayed focused on a clear, transparent melodic line. This is often done as a showpiece, but Mørk emphasized expression and was exquisitely sparing in when and how he used vibrato. His dark approach is more brooding than brilliant, allowing for new discoveries which Dutoit and the CSO seemed to relish exploring with him. Mørk received a well-deserved standing ovation at the conclusion of his performance.

Prokofiev’s 125th birthday anniversary has been celebrated all season by the CSO, which Prokofiev had performed with on several occasions across nearly two decades. The Fifth Symphony is one of his best-known works and given Dutoit’s flair for Russian music and for Prokofiev particularly, he managed to bring out nuanced details of the score that are often overlooked.

Dutoit’s Prokofiev is more angular than the more lyrical approach of Muti, a nice contrast that works well for this World War II-era symphony that is detached from the destruction surrounding it. Many prefer the war-effects laden symphonies of Shostakovich from this time, but this is a more optimistic and humanistic piece that is all the more remarkable given the cynicism of the era.

Those same themes of humanism and optimism also color this week’s programs for Passover/Easter weekend, when Dutoit and the Chicago Symphony Orchestra and Chorus will traverse the Fauré “Requiem,” a kinder, gentler Requiem than those settings by Verdi, Mozart and Berlioz that have sections literally designed to scare the hell out of us.

There is no “Dies irae” here; in fact, Vatican II would eliminate the terrifying sequence describing the Day of Judgment in the late twentieth century. But Fauré was decades ahead of his time in conceiving funeral Mass music as something delicate, designed to comfort; the prevailing view today. Israeli soprano Chen Reiss and German baritone Matthias Goerne are the soloists. These are rare CSO performances of a sublime masterpiece that has not been performed here in nearly twenty-five years.

Honegger’s also rarely done three-movement Third Symphony (“Liturgique”) is an instrumental work that uses movements of the Requiem Mass as its inspiration but like his fellow Frenchman Fauré, Honegger takes a more gentle, virtually contemplative approach.

Opening the program is the “Good Friday Music” from Wagner’s “Parsifal,” some of the most mystical music ever written which given that there is a Good Friday matinee among the three performances of this program, affords a rare opportunity to experience this magical piece on the day itself.