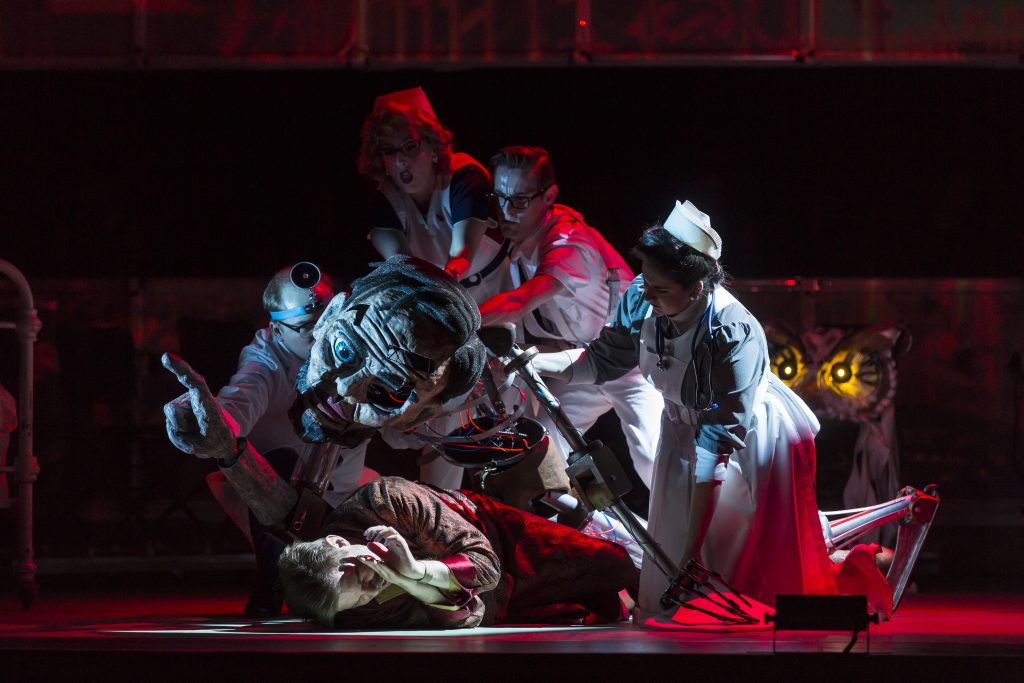 A dying Walt Disney (Justin Ryan) is confronted with demons of his past in Chicago Opera Theater’s “A Perfect American.” Photo: Liz Lauren

Even the five-hour abstract piece to which Glass explicitly first applied the term “opera,” “Einstein on the Beach,” is only an opera in the sense that some of it is sung; there is no narrative structure.

What is surprising in Chicago Opera Theater’s Chicago premiere of Glass’ 2013 “The Perfect American” is how much the stage music of the elder Glass—who turned eighty in January and who has long been considered the High Priest of minimalism—resembles the stage music of younger minimalist John Adams, who turned seventy in February.

Glass, like his contemporaries Steve Reich and Terry Riley, had kept to a stricter form of minimalism that emphasized subtly shifting patterns within repetitions. As the perceived heir apparent of the next generation of minimalists, Adams had initially taken up a similar type of what he has since called “chaste” minimalism.

However, by 1987’s “Nixon in China,” Adams was using arpeggios as cells or musical gestures that began evolving into larger structures supported by Wagnerian-like orchestrations to build dramatic tension and release and allow for greater dynamic flexibility. Adams also so freely incorporated popular, jazz and world-music idioms that he was charged with corrupting the simplicity and purity of minimalism by its staunchest supporters.

Glass is following a similar template in “The Perfect American,” which Chicago Opera Theater opened Saturday night after its American premiere last month in California with the same cast and artistic team. Indeed, the choral scenes with their pulsating ostinatos (wonderfully sung by the Apollo Chorus of Chicago prepared by its longtime music director Stephen Alltop), very much recall moments of “Nixon.”

When one’s building blocks are primarily diatonic arpeggios, one could argue that with any minimalism, imitation is the sincerest form of repetition. But given how “chaste,” to use Adams’ word, and narratively abstract Glass’ earlier stage works have been, it is a jolt to experience octogenarian Glass unraveling elements of his signature style in a manner akin to what Adams had done thirty years ago.

This is not without precedent in music history: while Haydn was the primary architect of the genres and forms of the Classical era and style, the elder Haydn was later making use of innovations that the younger Mozart had pioneered within that style.

Stravinsky became a serialist after the death of Schoenberg; Verdi made brilliant use of the full fusion of music and drama that his contemporary Wagner had brought about when Verdi wrote his final operas “Otello” and “Falstaff.”

“Falstaff” is further invoked in this opera in this being an elderly Glass giving musical voice to another elderly figure, a fellow populist at the end of his life. As Walt Disney (baritone Justin Ryan) lay dying in the hospital in “The Perfect American,” Disney is looking back at his work, his life, his relationships, his demons. One cannot help but see Glass doing the same thing.

When pop art icon Andy Warhol (tenor Kyle Knapp) tries to visit Disney in the hospital in those last days in an incident that, like much of the opera, is fictionalized, the Disneys have no idea who he is. “We are doing the same thing,” Warhol sings in comparing his work to Disney’s, the reason given as to why Warhol needs to see Disney on his deathbed.

It is difficult not to see Warhol as some sort of Glass surrogate for an imaginary encounter of aesthetic populism meeting pop-culture populism which in the opera, as in life, rarely occurs.

A reminder of how wide that gulf actually is: a few blocks away from the Harris Theater where “The Perfect American” is playing, the Disney property “Aladdin” with its Broadway-style, family-friendly score is settling in for a five-month run at the Cadillac Palace Theatre. A through-composed “opera” about Disney, however, runs for two performances.

With “The Perfect American,” the final offering of COT’s 2016-7 season, artistic director Andreas Mitisek steps down at the end of his first and only five-year contract with the company. It has been an adventurous yet uneven era, to be sure, but it is seldom good news aesthetically when an artistic director is being replaced by a company’s executive director.

Philip Glass marked the beginning and the end of the official COT Mitisek era, although Mitisek will be back in the fall to direct Menotti’s “The Consul,” an apparent carryover; Glass’ “The Fall of the House of Usher” was Mitisek’s first-ever COT production which he conducted and directed and Glass’ “The Perfect American,” which he conducted and Kevin Newbury directed, closed it out. Both were area premieres. It is not insignificant that across those five years, “The Perfect American” is a far more polished affair and well worth catching for its second and final performance, which the composer is scheduled to attend.