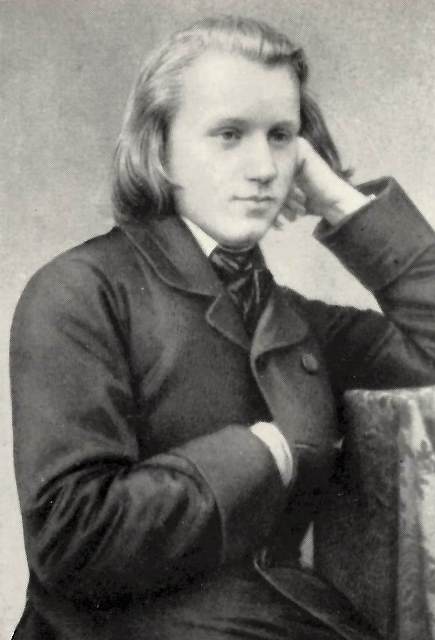 “It is still now, not a bad recording,” assesses Muti of his work from nearly thirty years ago. “But I have been doing Brahms with Berlin [Philharmonic] and with the Vienna Philharmonic especially, a lot: on tour, in Vienna, in Salzburg. I think now it’s time to do it with the Chicago Symphony.”

Although Brahms is a composer Muti has performed “since I was a bambino,” his ideas on how to perform Brahms have transformed over the years.

“In the beginning, I was taught that Brahms was the continuation of Beethoven: the First Symphony of Brahms is the Tenth Symphony of Beethoven, all this, scusi, bullshit. Generally, the attitude in the past was to play Brahms very fat with a famous, big, heavy sound. But Brahms was also very refined. Today, my Brahms comes very much from the influence of Schubert. This is as it should be because Brahms was a great composer of lieder, like Schubert.”

Being chosen by Herbert von Karajan to conduct the Vienna Philharmonic at the Salzburg Festival in 1971 was the beginning of a long and extraordinary relationship for Muti and Vienna, that has continued to this day.

“The Viennese have power when they do Brahms, but when they have to sing, they sing. It is more transparent. For example, in the Fourth Symphony [hums theme], it’s written in the score, “poco forte,” or “a little loud.” It doesn’t mean forte. It’s a very mysterious dynamic indication. When I did it in Philadelphia, I had to work to get it lighter because the tendency was to play Brahms very meaty. When I do Brahms with the Vienna Philharmonic, they are lighter and more lyrical. It is very natural. They have always played it that way. I took that from them. For them, Brahms is a natural language.”

Is there something that the Chicago Symphony can uniquely bring to Brahms? “Sì, sì, they respond. This orchestra is very flexile and they can respond to different conductors in a different way. So somebody with a concept of heavy Brahms, they will respond. In the same way, although this has always been a great orchestra, I think recently the orchestra has become, as the critics in Europe said on our recent tour, more homogenous and more transparent. There is still the ability to do what the old Chicago Symphony could do in power—‘The Battleship,’ as it was once called. Now they can play more lyrically and in a really refined way as well. I am sure we will enjoy doing this Brahms cycle together very much.”

Thursday night was the first of four pairings of the Brahms First and Second, next week will feature three concerts featuring the Brahms Third and Fourth.

Brahms had worked on his First Symphony on and off for over twenty years, so large was the shadow of Beethoven. It is the grandest of the four Brahms symphonies, a “first” symphony of a well-established composer already with a strong compositional voice of his own.

Much is made of the Beethoven influence, but is there, as Muti suggests, also a Schubert influence? When Muti conducts it, indeed there is. Rather than an opening made to be ploddingly metrical, Muti kept David Herbert’s timpani as a pulsating part of the texture, never overwhelming it. The drama unfolded less stormily than usual, the excess Romanticisms kept at bay, perhaps too much for a guest principal trumpet and a horn acting as principal that were having some intonation and volume issues.

A guest principal oboe for an indisposed Alex Klein was serviceable in the second movement but the real highlight was co-concertmaster Robert Chen’s violin solo near the end. The third moment was Muti in his element bringing out lyricism and maintaining a poignant lightness before launching into the finale with admirable restraint. The trombone choir that leads into the famous theme that serves as the climax of the work was beautifully rendered, setting up the strings and full orchestra for a tension and release that was vintage Muti: the transformed theme was slightly slower and more mysterious before a thrilling recapitulation.

The Brahms Second is less often performed than the First, except by Muti: it is a particular favorite of his and in fact, the only Brahms symphony he had previously performed in Chicago before this cycle. I watched him go through it, moment by moment, at a public rehearsal with the Civic Orchestra a few years ago and have never thought of this piece the same way again.

Often called Brahms’ “Pastoral” Symphony, it is the most programmatic of the four symphonies and at least with Muti at the helm, the most evocative. Here, the Schubert influence is particularly emphasized.

The second movement melody is sculpted in real time so carefully by Muti it is overwhelming in its tranquility and poignancy. It did not disappoint Thursday night. People tend to associate Brahms melodies with his famous lullaby, or the First Symphony finale, but Muti eloquently makes the case that this may be the Brahms melody where he is at his most introspective and beautiful.

Special mention must be made of acting principal horn Daniel Gingrich’s wonderfully rendered hunting horn solos throughout the piece.