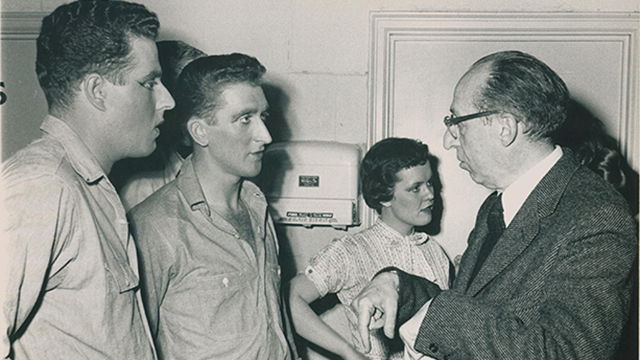 Aaron Copland (far right) works with Northwestern students on “The Tender Land” in 1958.

For most of the twentieth century, no sounds epitomized Americana more than that of the music of Aaron Copland; he was so treasured that he was often referred to as the Dean of American music by his colleagues.

Particularly in his early ballets (“Appalachian Spring,” “Billy the Kid” and “Rodeo”) as well as in his film scores, symphonies, songs, chamber music and in patriotic works such as “Fanfare for the Common Man” and “Lincoln Portrait,” Copland came to embody a vernacular soundscape with his folk rhythms and open fourths and fifths seen as metaphors for the openness and vastness of the American prairie and spirit.

One form that eluded Copland until relatively late in his life was opera. And who of all people would come calling in the early 1950s but Rodgers and Hammerstein and their League of Composers, with an irresistible offer for Copland to write an opera for television in the wake of the success of Gian Carlo Menotti’s popular television Christmas opera, “Amahl and the Night Visitors.”

Although NBC turned down flat the end product that was the result of two years of work, New York City Opera and later Tanglewood picked up “The Tender Land,” attempting to beef up a piece written for the then-intimate medium of television into an expansive live stage work.

Those attempts were poorly received; but there was a fringe benefit to “The Tender Land” having been conceived on such a simple scale: Copland’s publisher, Boosey & Hawkes, began offering the work to student groups, where the piece resonated.

One such case was Northwestern University, and one such visitor to its Evanston campus in 1958 to see what students were doing with “The Tender Land,” was Copland himself. Over the course of his two-week campus visit, student ensembles performed Copland chamber music as well as his works for band, brass, piano and chorus. Copland lectured to students on music and composition. The grand finale was a student performance of “The Tender Land,” only four years old at that point, conducted by Copland himself.

This weekend, Northwestern is resurrecting Copland’s “The Tender Land” in the same intimate space, Cahn Auditorium, where Copland led that performance fifty-nine years ago.

Have the decades been kinder to “The Tender Land?” Some of its music is certainly better known thanks to Copland’s arranged suite of its music and due to recordings, the internet and the like.

But dropping in on the Thursday-night opening that inaugurated this four-performance Northwestern student run, it was hard not to be struck so much by the usual criticism of how little there is to the original libretto, but how incomplete and implausible the ending of the work still comes off.

Director and retiring faculty member Michael M. Ehrman certainly does his best to flesh out the characters, even incorporating what has become a frequent post-Copland, “Die Fledermaus”-like performance practice of expanding the Act II graduation party scene with renditions from Copland’s “Old American Songs.” Certainly when Laurie and Martin sing a duet of “Simple Gifts” looking into each other’s eyes, there is almost the sense that they are falling in love.

Not that any of this matters: Copland’s music is the star of the show, and the students sing their hearts out for you with capable student choral and orchestral support.