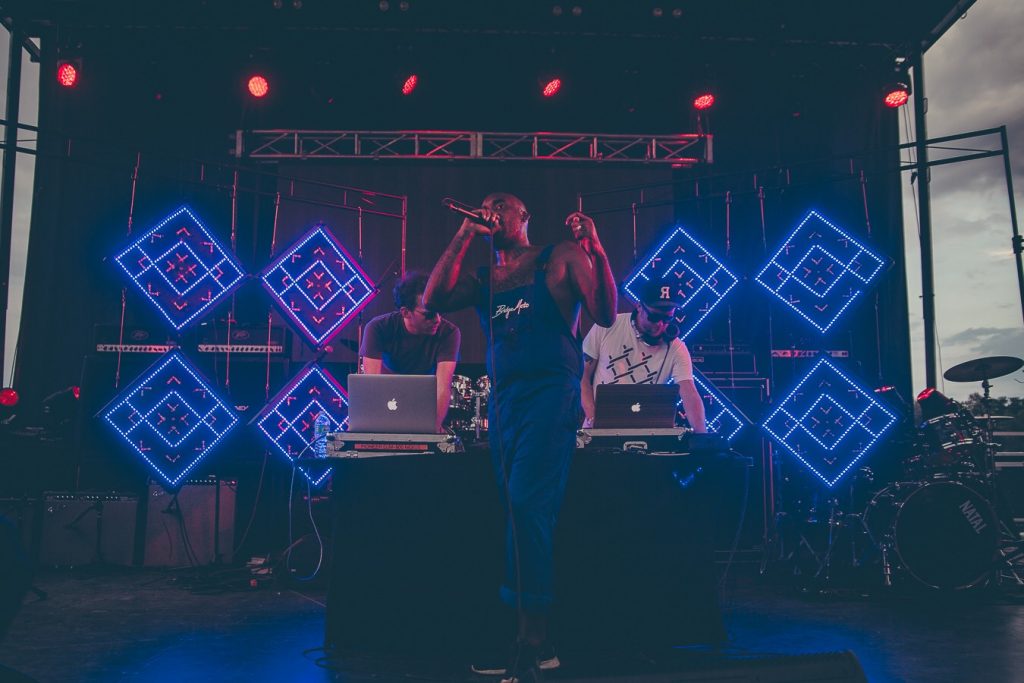 Air Credits is “music from the not-too-distant future, when the planet’s water supply has all but ceased,” and where radio stations are “climate-controlled compounds, guarded heavily by their surrounding communities not only to maintain communique with the declining population, but to preserve music new and old.” At least that’s according to the Chicago trio’s website. But when you talk to one member, rapper ShowYouSuck, you discover there’s a lot more behind the band.

Show (born Clinton Sandifer) says Air Credits was born when he booked some live concert dates in 2016 with some fellow Chicagoans: electronic duo The Hood Internet, Aaron Brink and Steve Reidell (who go by ABX and STV SLV, respectively). They first worked together when Show guested on a cut on The Hood Internet’s “FEAT” record that dropped in 2012, but once they got together to rehearse for the tour dates last year, they realized they wanted to collaborate, not just share a stage. What began as three or four songs written together evolved into a full-length album, “Broadcasted,” which was self-released last October.

Working with Brink and Reidell in this fashion was a unique experience for Show for several reasons. For one thing, it was kind of a “back-to-front” experience: he says “that this is the first time for me personally working on an album through the course of a year and performing it from the beginning, so we were steadily recording songs and then testing them live on the road right away, before they were even finished. It was a really rad experience.” It is, he continues, “still a process that we do this to this day, even if you come to an Air Credits show now, we’re starting to play songs that will be on the next record, even though it won’t come out until 2018.”

He hastens to add that there’s more music to come from the trio between now and then. At the end of April their remix of Maggie Horn’s “They All Say” came out, new material is included in their Factory Session recorded by CHIRP Radio and an eighteen-minute continuous mix of new Air Credits music should be out in May. In the fall they’ll release a collaborative album with rapper Sims, a member of Minneapolis’ Doomtree collective. Show says this features Sims rapping at his best, and adds that there’s “a lot of trading raps going back and forth, there’s some singing; it kind of goes across the board like ‘Broadcasted.’” The subject matter dives further into this future world they’ve created, and will cover more about its authority figures, what the underground clubs are and many other different aspects. He also promises, somewhat enigmatically, that they’ll “be making some cool things that will come out with the album as well.”

ShowYouSuck also describes this Air Credits project as a unique experience for him, since he’s always been a solo artist. He’s released too may mixtapes to count, many thematically geared toward his obsession with pizza, but he says that, while he’s still a fountain of pop-culture references, with this dystopian, post-apocalyptic environment they’ve created he can also harness his love for science fiction, B movies and comics. Even though that’s the case, he doesn’t worry that the conceit could be too limiting, given that this “music of the future” is being played on future radio, and thus can play music from all genres and time periods.

“The cool thing about the universe that we’re creating,” which Show says was only briefly played with on “Broadcasted,” is “the idea of parallels, you know, universes and time travel, so I feel like with those parameters it opens us up to make it whatever we want to make it. We can make a surf-style song and say hey, this is a song that was archived from the 1970s. It’s still an Air Credits song because we made it, but we can make any genre of music that we want to,” because you’re listening to a radio station in the future, and on the radio, songs from different decades can play next to each other. “There’s definitely a concept, there’s an idea, but it’s more of a sandbox, this is more of a universe to play in. That’s how I’ve always made art, I make these rules at first and then I break them,” he says with a laugh, “but I can do that because it’s art, it’s cool, but it’ll make sense in terms of story. It takes people on a ride if you really pay attention.”

ShowYouSuck may have made his name as a rapper, but his hip-hop path was more fashioned by environment and necessity than by his original inclinations. Show describes himself as “a punk kid first and foremost,” though heavy metal was the gateway to his interest in punk. “I was raised by MTV, so naturally ‘Headbangers Ball’ was everything… I grew up on Slayer and Megadeth and Metallica, and it led me to Bad Brains and Black Flag.”

But Show didn’t grow up around anyone else interested in punk. “I’m from the West Side of Chicago so, especially being a young black male, R&B and rap music is put to you first before other genres… I started rapping because it was really easy to start, because you don’t need to buy anything, because you don’t need rap members to start rapping, but you kind of need band members to start a band, and I couldn’t find that. With Air Credits, this is the first instance where I’m like, ‘Oh, I’m in a band.’”

His enthusiasm for his partners, Brink and Reidell, is palpable: “They’re amazing, they do not get enough credit, there’s so much growth from the ‘Feat’ album to this album in their production. I can’t wait for you to hear the stuff we’re working on now, it’s so cool… I’m finally making the music that I’ve been a fan of for so long… I’m literally making the music that has always been in my head, and those dudes are making it happen.”