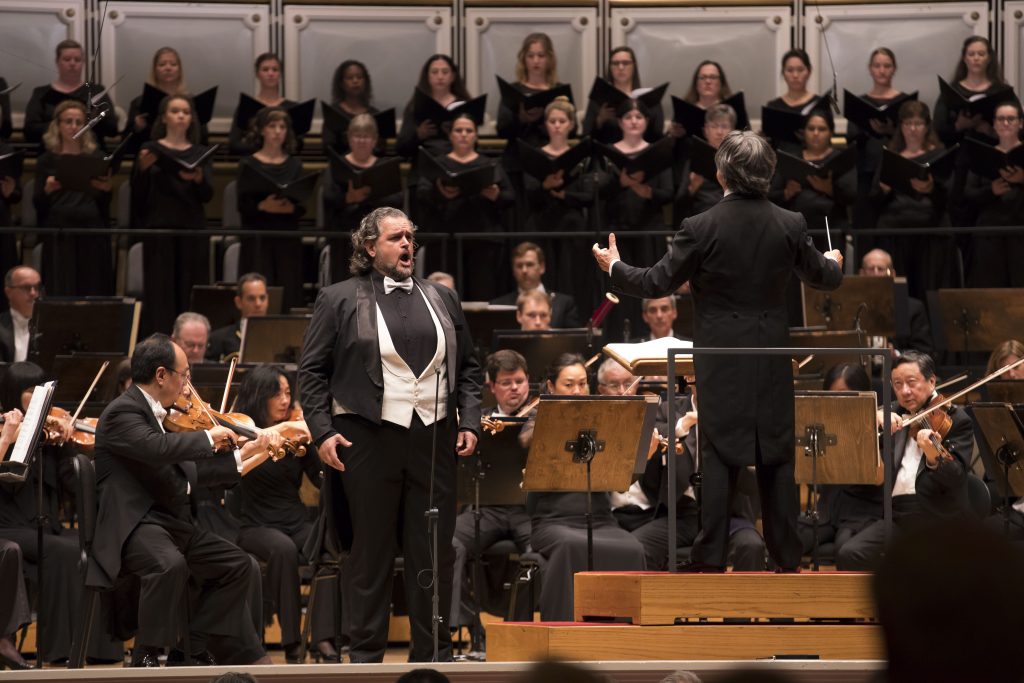 The idea of an “Italian Operatic Masterworks” concert, as the Chicago Symphony Orchestra billed it, was something anyone who knows anything about CSO music director Riccardo Muti’s past as nearly twenty-year music director of Italy’s most famed opera house, La Scala, would consider a no-brainer. But believe it or not, this weekend’s season finale of the CSO’s 2016-17 season was the first time such a Muti-led program became a reality. Complete operas, yes: “Otello” in 2011, “Macbeth” in 2013, “Falstaff” last season, operatic overtures here and there, even an opera ballet and non-operatic pieces of opera composers. But never a dedicated opera “highlights” program.

The model, as Muti explained to the enthusiastic audience at Thursday’s opening night, was the concert led by legendary Italian conductor Arturo Toscanini at the reopening of La Scala after it had been bombed during World War II. Then, as now, Boito’s Prologue to “Mefistofele” served as the heavenly end of the evening, literally.

Boito, best known as Verdi’s librettist for his final and greatest operas “Otello” and “Falstaff,” was a sort-of operatic Orson Welles early on in his career: he not only composed the music for the epic five-act “Mefistofele,” he also wrote the libretto and even conducted the premiere.

The Prologue is such a spine-tingling and thrilling masterpiece that, in many ways, everything that follows it in the opera itself—wonderful though it is—seems somewhat anticlimactic by comparison. As a stand-alone piece it is as overwhelming as it is in the opera house, more so on this occasion given the extraordinary care that Muti and his combined forces brought to it.

The scene is virtually impossible to stage, taking place as it does amongst the clouds of the heavenly realm, with various choruses representing levels of angels, an earthly chorus, et al, organ, two harps, even a second offstage brass and percussion section heard from the distance. Ergo, a concert performance blessedly leaves visuals to the imagination to accompany the spiritually orgasmic climax when all of the choirs—taken on by a full Chicago Symphony Orchestra chorus prepared by Duain Wolfe and augmented by the Chicago Children’s Choir prepared by Josephine Lee—combine with the forces to spectacular effect.

Of course, being based on Goethe’s “Faust” and taking a somewhat satirical view of Gounod’s “Faust,” the most performed opera of its day, the devil is not far away, luxuriously sung by Italian bass Riccardo Zanellato and offering the perfect diabolical complement.

The contrast between the Boito and the two-string-laden instrumental intermezzos that preceded it—from Puccini’s “Manon Lescaut” and from Mascagni’s “Cavalleria rusticana”—was striking, a gentle and beautiful calm before the cosmic storm.

The first part of the program was devoted exclusively to Verdi, the composer most associated with Muti. Two overtures, “Nabucco” and “I vespri siciliani” opened and closed this portion, serving as effective bookends for four choruses that demonstrate the extraordinary ways in which Verdi used the chorus as an aural “character” in his operas: the Hebrews’ opening prayerful plea for deliverance from the Babylonians that opens “Nabucco,” followed by that opera’s—and Verdi’s—most famous chorus, “Va, pensiero” and its homesick yearning tenderly rendered. The gypsy “Anvil” Chorus from “Il trovatore” with its clanging refrain offered raucous respite while “Patria oppressa!” from “Macbeth” portrayed the suffering of oppressed Scottish exiles.

The season-finale performances are dedicated to University of Chicago historian and musicologist Philip Gossett, who passed away June 12 and was responsible for the definitive critical performing editions of Verdi and Rossini. “His passing is cause for great sadness in the music world,” Muti noted, “but his work and contributions in the field of musicology represent a treasure that will remain forever.”