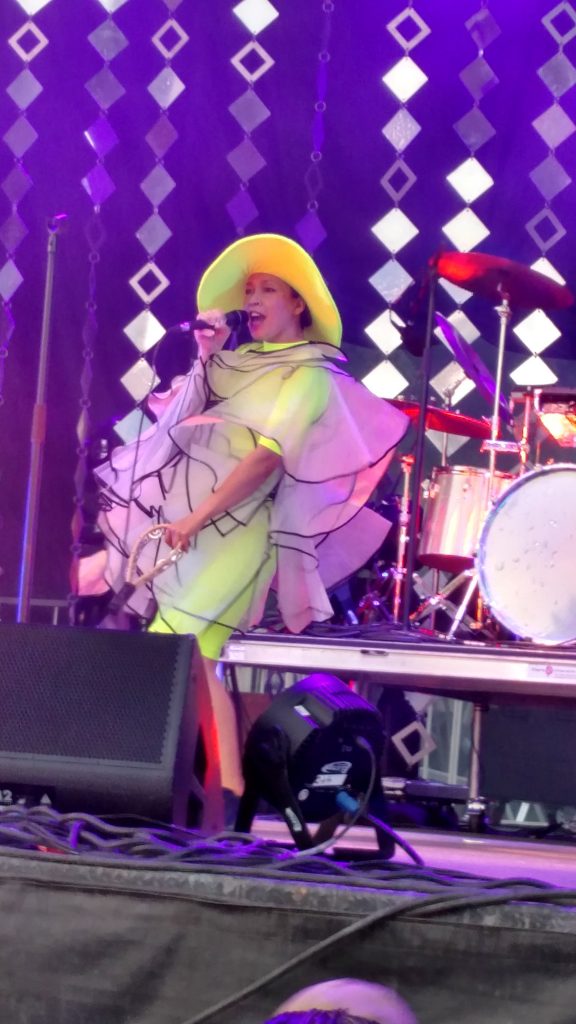 Natural and individual disasters kicked off Lollapalooza 2017. Thunderstorms shortened Day One headliners Muse and Lorde’s sets, while Liam Gallagher’s piss and vinegar (or according to him, his voice) led to him walking offstage three-and-a-half songs into what was primed to be one of the highlights of the festival. Even on the side stages, Atlas Genius stopped its intimate Toyota Den set because they couldn’t find a properly tuned guitar! So there was a lot of pressure on Day Two to pick up the slack.

Luckily, though the day was uncharacteristically cool and there were smatterings of rain, a diverse lineup provided many extra-base hits—if no grand slam.

The afternoon provided powerful sets from brash Toronto emo punks PUP, who got the crowd at the Tito’s Handmade Vodka stage pogoing, with their buzzsaw songs about apathy and anger. Throwing off more four-letter bombs than any rapper, singer and lead guitarist Stefan Babcock launched himself into the mosh pit, singing during a bumpy crowd surf. Audience members joined in the flowing waves, overwhelming security with an en masse—yet somehow gentle—assault.

While PUP took pride in the fact that it typically plays DIY basements and lofts, Dylan Baldi, the leader and moving force behind Cleveland’s Cloud Nothings, complained that the venue he had played the previous night (Reggies) had a sewer in the middle of the stage. The backyard of an Urban Outfitters in Austin is where I first saw them in 2011. At that time Cloud Nothings were one of the better power pop bands around. By the next year, they had developed a harder, almost metal edge. Today’s version puts them smack in the middle, somewhere between Hüsker Dü and Foo Fighters. Not as much and volatile as PUP, but plenty of power and angst.

Sometimes I swing by Kidzapalooza for a break from the crowds. This year’s pleasant music surprise was the funky and outrageous Lard Dog & the Band of Shy (“Lard” an abbreviation of “Life’s a Real Dream”). Mixing swing, surf and B-52s-ish dance songs, with lyrics about slurping noodles and “the boogah” and featuring a horn section tricked out in fezzes, this band lets you have a psychedelic trip, not take things too seriously, and smile.

Playing the same stage as last year’s Lolla, when they teamed with Big Boi as Big Grams, Phantogram provided dreamy, afternoon grooves, using their chill sound to warm up a cold crowd. Lead singer Sarah Barthel sounds great enough to make you pine to hear Karen O, but brings her own grace and musicianship to the mix.

A more lush, sultry and propulsive presence came from Yukimi Nagano of Swedish band Little Dragon. In a neon-green dress with a top-to-bottom overlay, she channeled the sound and vision of Madonna and Björk, her vocals matching the accompanying overpowering percussion and electronic bass, creating a swoony, sweaty dance floor to compete with the DJs at Perry’s stage for danciest stage at the festival.

The heaviest hitters of the day were Run the Jewels’ Killer Mike and El-P.  After throwing out the first pitch at Wrigley Field and performing at their own pop-up bar in Logan Square, they hit it out of the park, galvanizing the crowd into a fist-pumping fury with their mixed messages of caring for others and espousing a drug/thug womanizing lifestyle. While encouraging listeners to “lie, cheat and steal” because “everyone does it,” they had the love to let an audience member rap with them on “Legend Has It,” a song that epitomizes their incongruity. They’re both “no-gooders” and “do-gooders known to the dancers and dealers and doers of dust.”

A complex conundrum. Such is life (and rock ‘n’ roll).