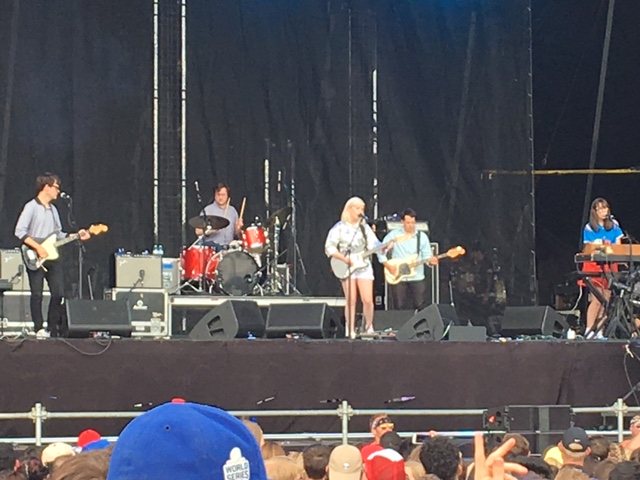 After the unseasonable chill that prickled the city on Friday, the buttery, summery warmth of Saturday was more than welcome. It was made-to-order festival weather, and it gently sapped the urgency from the exercise. Never mind seeing everything and everyone; a leisurely pace was in order—and so the spouse and I submitted to the call of whichever siren might prove most persuasive.

At the Lake Shore stage, the Brooklyn-based band San Fermin delivered a performance that could be called, not unreasonably, operatic—and not simply because the nine-member ensemble includes violin, trumpet, and sax, giving it a downright theatrical range of textures. The brainchild of bandleader and keyboardist Ellis Ludwig-Leone, the set (like some of the band’s albums) was structured as a kind of dialogue between lovers, with the roles being sung by the band’s two inimitable front folk: Charlene Kaye and Allen Tate, whose voices—hers clear and citrusy, his chesty and resonant—blend like extra-virgin olive oil and aged balsamic vinegar. The songs are sophisticated compositions, looking at relationships from idiosyncratic angles (“All dressed in my Sunday best, when I solve you, love / Maybe find a place where we could rest when we’re old enough / We can have a dog and all the rest, we can live it up / All dressed in our Sunday best”).

Kaye and Tate initially alternated tunes in a kind of she-said, he-said manner; but in “Parasites” they came together (abetted by violinist Rebekah Durham) in a show-stopping piece that plays out like an indie-folk suite, with melodies, tempos and grooves braided and overlaid. It also featured my favorite moment of the day: baritone sax man Stephen Chen’s blistering solo, for which he seized center stage and just basically melted every face within speaker range. Anytime a sax solo gets a spontaneous ovation at a rock festival is a good day.

It was a trek from Lake Shore to Tito’s Handmade Vodka—a smaller stage, tucked away at the corner of Jackson and Columbus so that you almost had to have GPS to locate it. And the audience assembled for the set by the twenty-six-year-old British soul sensation Jacob Banks was in fact a small one (despite which Mayor Rahm Emanuel was supposedly on hand; glad I didn’t know it at the time). Yet somehow, the reduced scale of both the stage and the crowd (and the pool of shade over both, given the stage’s east-facing angle) played to Banks’ strengths, which despite R&B and soul chops that bear direct lineage from Sam Cooke and Sly Stone have an almost Dylanesque intensity that’s best experienced close-up and personal.

This was particularly the case in the tune “Homecoming,” an ode to Banks’ Nigerian mother, that began with just his crushed-velvet voice over a spare piano (“See my daddy was a farmer and Mama see was a nurse / Told me stories about the world, I’m about to find what it’s worth”). It was a disarmingly intimate moment, one that made the surrounding environment do a slow fade. That’s a rare gift for a performer: turning a festival stage into a small, dim-lit room.

We ended our day in late afternoon with the Alvvays set at the Bud Light stage. The Canadian quartet almost didn’t make it to Chicago, as explained by front-woman Molly Rankin; their flight was canceled due to “crazy weather” in their hometown of Toronto. But they piled into a van and guitarist Alec O’Hanley drove them all the way down. It was a trip well worth taking. The band’s resurrection of breezy, jangly nineties-era indie-pop—with a gloss of postmillennial irony; but no more than a gloss—was exactly the tonic we need in the current, toxic sociopolitical moment.

But Alvvays isn’t interested in being some old dude’s nostalgia act; and Rankin’s reined-in, imperturbable delivery couldn’t disguise that even their danciest numbers confront anxieties and insecurities. “Adult Diversion” is essentially an upbeat little number about stalking (“Even if you don’t notice as I admire you on the subway / When it’s dark outside your house / You won’t let anybody out … One more cocktail / And I’m on your trail”). And “Atop A Cake” is a lament about a controlling lover (“You’d like us on top of a cake / But you won’t let me take a bite”).

It was at precisely this moment that a cool breeze blew in from the lake, drying the sweat of the morning and soothing the passions stoked by the music. That’s the way it was, Saturday at Lolla; even the temperature was cued for effect.