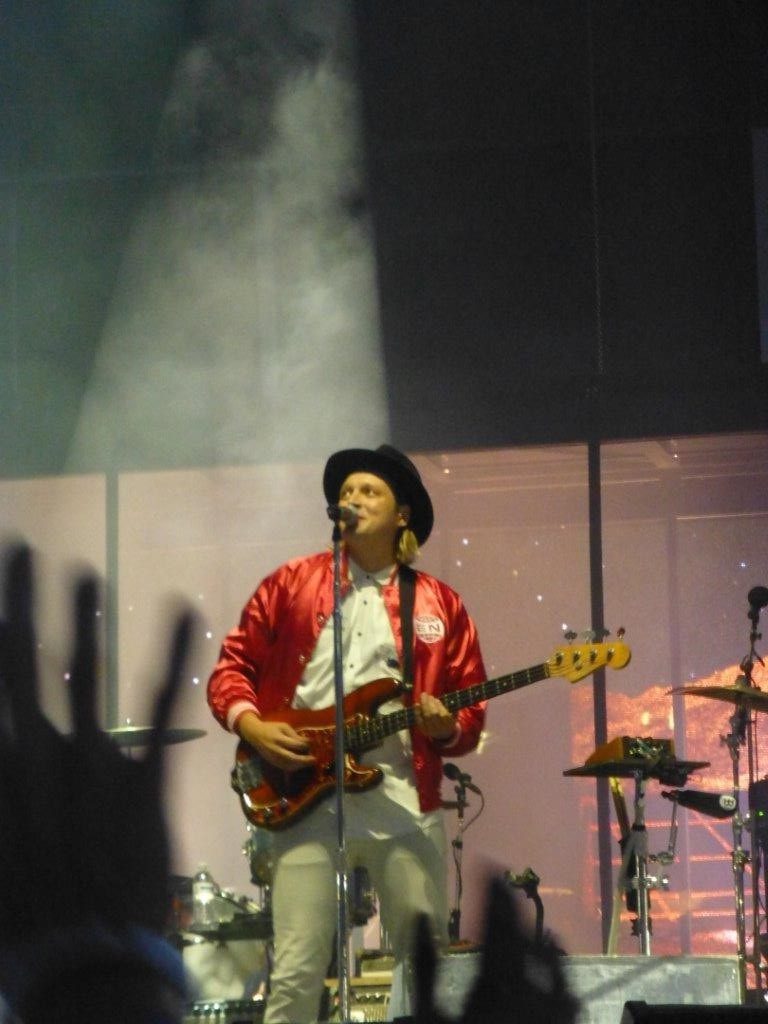 A reflective Win Butler attempted to comprehend his and his family’s band Arcade Fire’s place in the universe while closing down Lollapalooza Sunday night. He observed that not only was Grant Park the location of their coming-out party at the first permanent Chicago-site show in 2005, but three years later was also the place where a majority of US and world citizens celebrated Barack Obama’s historic, euphoric victory in 2008. Win noted those moments, not just to mark time, but to remind us where we all are today, and that though the US is at a low point he is not giving up and that we can and will do better.

In the vortex of time, place and music, Arcade Fire carries its ancestors along for the journey. Their early work combined the thick, percussive world beat of Talking Heads with a Motown bounce, and more recently has veered a bit toward disco, as witness their Abba-esque title track, “Everything Now,” with which they led off the show. Along the way, the band paid direct homage to David Bowie, without whom “none of us would be here,” John Lennon, whose “Mind Games” closed the set and Joy Division/New Order, singing “Bolts from above hurt the people down below” from “Temptation” at the end of “Afterlife.”

But how did we get to this beautiful closing set?  How did Lolla pass such a beautiful, sunny day?

While the four-day Lolla experience certainly dilutes the talent pool, along the way there were a few highlights, including Chicago’s The Walters, whose lead singer Luke Olson effused that it was “a dream come true” to play the festival. Olson proved to be one of the most creative and best dancers in the park, doing booty shimmies, dancing on his knees and preening to the crowd while the band played shiny sixties-infused pop tunes.

Will Toledo of Car Seat Headrest channeled Wilco in singing meaningfully about the sad and avoidable results of drunk driving, passionately insisting that “it doesn’t need to be like this” until the crowd joined in.

Two sides of rap were on show, from Chicago’s Noname, who provided soulful, politically charged and emotionally infused poetry about life and death in the big city, and Christian hip-hop artist Nate Feuerstein a/k/a NF, who chanted about his hard work, being out in the world “Grindin’.”

The Shins proved to be perfect table-setters, laying down a soundscape to match a glimmering Chicago summer sunset. James Mercer’s falsetto rose above the band’s layered guitars on the elegiac “Phantom Limb,” and injected a verse from “American Girl” into “Sleeping Lessons.”

Both The Shins and Arcade Fire created bridges with the crowd, with more audience “oh,” “wah-oh” and “ooh” singalongs than a Springsteen and Naked Raygun set combined. Win Butler also had the audience take out their cell phones and wave them to the sky as if to show whoever may be up there—if there is anyone up there—that we’re here at this place, at this time. The hypnotic power of common experience in music left the crowd spontaneously breaking out into the chorus of “Wake Up” as they went out into the night.

Win provided an ironic but poignant meaning for the denouement of a festival where teenagers of all ages and from all parts of the world leave their baggage and lives behind, reminding us that the Golden Rule abides whether or not there is any higher power.

John Lennon’s “Keep on playing those mind games forever / Raising the spirit of peace and love” was Win’s coda… followed by “Take care of your children.”

Bart Lazar is a Chicago-based independent music journalist, vinyl DJ, concert producer and record label owner. Bart has a monthly residency at Sportsman’s Club where he educates hipsters on fifty years of punk, indie and rock ‘n’ roll. In addition to Newcity, Bart’s writing can be found on his blog, oldpunksrule. By day, Bart is a partner at Seyfarth Shaw where is one of the nation’s leading advertising and intellectual property attorneys. Contact: bljet331@gmail.com