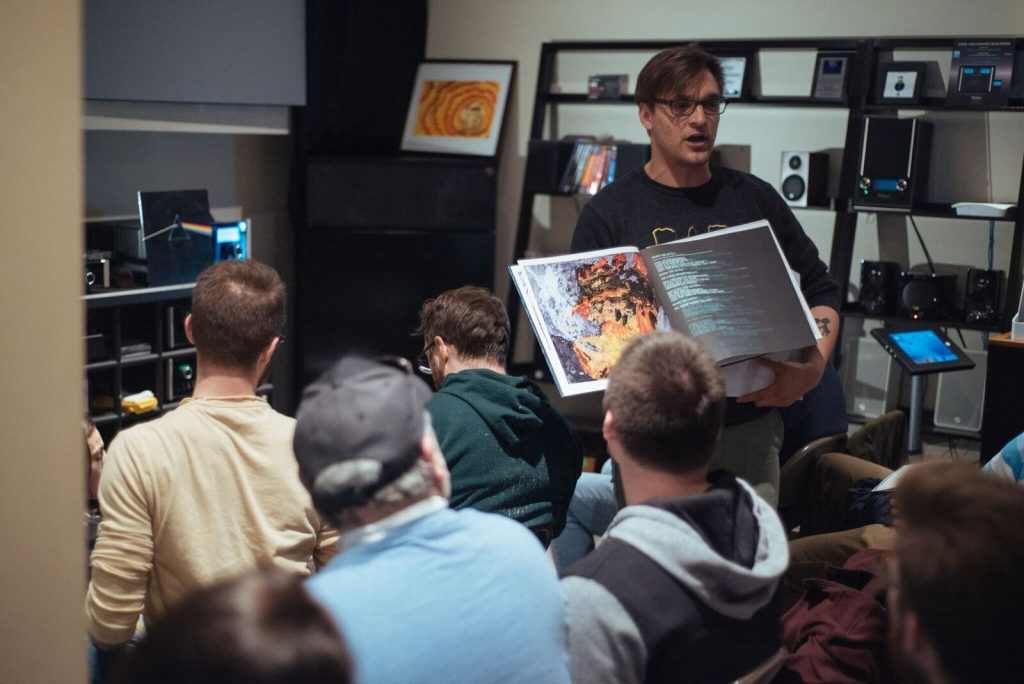 “Kraftwerk was able to build a time capsule that would preserve the past and predict future sounds,” Willett says. “‘Trans-Europe Express’ continues that mission, in celebrating the luxury train line that connected 130 of Germany’s cities.”

Willett expanded on both the band and the album in the accompanying “lyric comic,” which he co-creates for each session with artist Dylan Sowle. The comic is distributed for free to CAS attendees, who are encouraged to read the enclosed lyrics while the album spins.

After “Trans-Europe Express” concluded with “Endless Endless,” Willett opened the floor to discussion. Attendees discussed the “clean” sound of the remastered version. One listener recalled hearing the album for the first time in 1979, at a roller rink in north Chicago; another admitted that it was his first time hearing the album and though he did not enjoy it, he did enjoy the experience of listening to it at CAS.

CHIRP Radio, which volunteers at the event each month, had Jim Burchill on hand to close out the event with his own observations. For the week prior to the event, Burchill had played Kraftwerk in his car while driving for Lyft. He wanted to open himself up to the possibility of understanding some aspect of the album he couldn’t catch before. “Whenever possible, open yourself up to something new or something outside of your comfort zone,” he tells attendees.

“People who noticed the music said they’d been meaning to check out Kraftwerk, but never got a chance to,” Burchill says later. “People who hadn’t heard of them before were surprised to hear this was happening in the 1970s.”

Every month, music fans come to Classic Album Sundays and listen to canonical albums on vinyl with hi-fi audio equipment. To date, the largest attendance in this Chicago iteration of the event was eighty-five attendees for Radiohead’s “OK Computer.” (The venue capacity has since been capped at eighty.)

“On Facebook, I saw my DJ friend was interested in going,” says first-time attendee Rebecca Gordon. “I love Kraftwerk. So I thought, what have I got to lose?”

Another newcomer, recording artist T-Roc, found the event through Eventbrite when he and his business partners were looking for different music events around Chicago. “I wanted to mesh with communities outside of urban trap and mingle with people who enjoy pop-European trance music,” he says. “I would love to see how that would be intertwined with my music, potentially.”

Past featured albums have covered a variety of genres and artists, including John Coltrane, Stevie Wonder and Lauryn Hill.

“Some people come in and just want to hear that particular album,” Saturday Audio Exchange employee J.J. Iburg says. “Others come in to listen to good music.”

Willett personalizes each event. There are contributions each month by event supporters, such as Sam Postle, who brings “Sam-Made Lemonade;” Dark Matter Coffee, and Willett’s mother, Susan, who brings cookies. Willett also brought on event partner Alexandra Ruddock to help coordinate events, social media advertising and lyric-comic artwork. Saturday Audio Exchange owner Andy Zimmerman, manager Joe Corona and J.J. Iburg hook up the sound system throughout three rooms. They also supplied the equipment at the first three Chicago gatherings at Transistor Chicago. When the event started growing, Zimmerman offered it a home at SAE. Corona saw it as another way of honoring SAE’s commitment to providing customers with the best audio and listening experiences possible. “At the end of the day, we want to show others why we love doing what we do.”

“You can tell that by the consistent turnout that this is a great experience,” Postle says. “One of the things I most appreciate about the event is the collective nature of it. Maybe you don’t know an album or a band, but this is more interactive than that.”

The Classic Album Sundays franchise began in September 2010, when founder and BBC radio broadcaster Colleen “Cosmo” Murphy found herself “schlepping vinyl, audio equipment and an oil lamp up the stairs to The Hanbury Arms function room” in London for the very first event, which grew out of her own experiences hosting friends. “I would have people come over for Sunday lunch and listen to records. I realized there was this space that wasn’t being addressed.”

Murphy continues to run CAS events in London, which have expanded beyond the monthly format. Next month, as part of The V&A Museum’s Pink Floyd exhibition, “Their Mortal Remains,” CAS hosts three album-listening sessions, including a final session at which Pink Floyd’s Nick Mason discusses “The Dark Side Of The Moon” and the band’s ongoing legacy.

In late 2015, Willett noticed CAS was spinning Radiohead’s “Kid A” at a monthly event. He found the event schedule but noticed there wasn’t a gathering in Chicago. “I thought, why doesn’t this happen in my hometown? Then I realized: I could do it myself.”

In June, Willett visited London to help Murphy host an event that was a part of The Royal Albert Hall’s “Summer of Love: Revisited” program. Murphy held a discussion with Billy Bragg on the impact and legacy of skiffle, and how it later inspired counterculture British artists. Willett and Sowle created a mini lyric comic to distribute as the event’s official program.

Willett says it would be “a dream come true” if he could host similar events in Chicago. Until then, he’ll keep incorporating his own personal touch to the meetings he hosts. He’s also working to expand the scope outside the monthly album-listening event. A “Twin Peaks”-themed event, focused on Angelo Badalamenti’s soundtrack for the series, is in the works.

CAS experiences differ from city to city. In Oslo, it focuses on Norwegian classics, like deLillos’ “Hjernen er alene.” In Los Angeles, events are very private and exclusive. But the reason CAS can exist in so many different forms across the globe is the attendees themselves.

“If there were no demand, it would not exist,” Murphy says. “Music fans have become part of our CAS family, sharing memories of their favorite musical moments and revealing insights as to how these records have sometimes changed the course of their lives.”

Willett thinks that it’s the attendees’ responses that make the events so special for him. “The best part of CAS is how people react to being able to go. The reason I decided to pursue it in the first place was because it sounded like an event I would want to attend, and now I just hope that others believe that, too.”

Danielle Levsky is an arts and culture reporter, theater critic, essayist, poet, vocalist, technical writer and project manager. Born and raised in Chicago, she grew up speaking English and Russian, then later became fluent in French through her primary and secondary education. In addition to her work at Newcity, she has contributed news articles, arts/culture/music reviews, personal essays, interviews and editorial content to Mental Floss, HelloGiggles, Pittsburgh City Paper, Thrillist, Femsplain and other print/online publications. Danielle previously worked as a pagination designer and copy editor for the Chicago Tribune. When she’s not freelancing, Danielle writes poems on command with Poems While You Wait, sings with the Music Institute of Chicago Chorale and drinks copious amounts of tea. Contact: dlevsky13@gmail.com