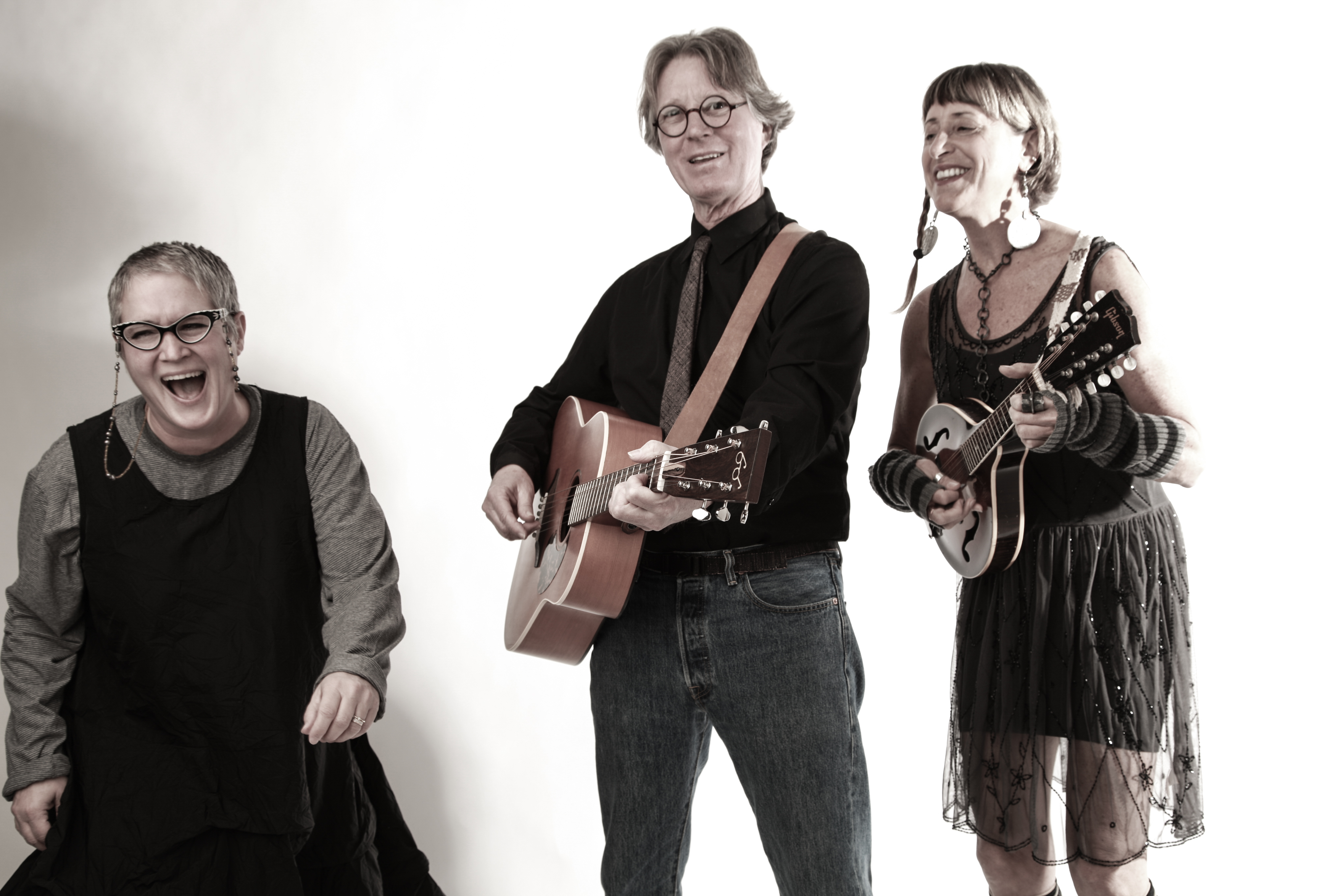 The folk trio Sons of the Never Wrong has managed, in the most winsome manner imaginable, to become both a cult band and a Chicago institution. This year the singer-multi-instrumentalists celebrate their twenty-fifth anniversary with a series of concerts and a new album (their tenth), “Song of Sons.” I recently got a retrospective take on their career from the band’s members: laconic, sagebrush-voiced Bruce Roper; serene, honey-toned Deborah Lader; and passionate, sonically turbo-charged Sue Demel. They’re basically a folk music representation of Freud’s id, ego and superego (I’ll leave you to figure out who’s which), and their interplay is as disarming in the flesh as it is on the stage.

Let’s move on to your origin story.
DEMEL: Really? You want it?

You can give me an abbreviated version.
ROPER: I was married, raised two kids good and proper, got divorced, came to Chicago, within a couple months played the open mic at Beat Kitchen. Sue and her friend Nancy Walker came.
DEMEL: It wasn’t an open mic; it was a round-robin of great songwriters. There were five guys and they were all awesome. Bucky Halker, Ralph Covert—I mean, all these really great Chicago singer-songwriters. And then this guy in seersucker shorts and a bow tie gets up, and we were like, [laughing] “Oh, this is the one—we can go get a beer while he’s playing.” And then he starts doing this tune called “The Carpenter Song,” which is just a masterpiece, and Nancy and I are like, “What was that?” We realize, “He can write; he just can’t dress.”
ROPER: I was playing another place—the Coffee Cup on Sheridan—and they came that night. Nobody was in there, of course, and so the three of us sat there and started singing. And we’ve been together ever since.
DEMEL: And then Nancy went solo six years later. And we were lucky to find Deb.
LADER: Bruce came to a show I was doing—another round-robin, at Uncommon Ground; he was scoping people out—and he came up afterwards and said, “We’d like to have you audition for Sons.” I only heard them a few nights before I auditioned, and I was amazed; but I didn’t think I would get it. I had two small babies at the time, so I was a little nervous about how the family discussion would go around me joining a touring band.
ROPER: We ended up raising her kids for her.
LADER: They did. I basically raised my kids on the road with these guys.

How has your dynamic changed over the past quarter-century?
LADER: I’ve watched you [to Demel] become funnier. Let’s just put it out there. If you’ve heard her—especially in the quieter spaces— she tells these stories, and sometimes Bruce and I haven’t even heard them before, and we get to react to them. So—it has nothing to do with the songs, but in terms of being comfortable with each other and relating to each other… it’s changed over time, gotten more loose. And I do think that comes into the music; there’s a comfort level that comes from being together this long, that you can say anything onstage, and you can go to a place in the music—I’ll look at Sue when she goes off somewhere, and I’ll think, “Okay, I’m there.” Or Bruce will make a mistake on the guitar, and we’ll go, “Okay; it’s jazz. Let’s do it.” We can almost anticipate each other’s foibles.
DEMEL: And also when Bruce and I fight—we fight a lot; for real—
ROPER: And for fun.
DEMEL: —and for fun—we have creative fights. Usually something decent comes out of it. Or… we go get donuts. And Deb being the oldest in the family, she knows how to keep the peace. So we get a lot done in spite of ourselves. I think the fighting has gotten more constructive. But the big change for me personally is, I don’t get to live in Chicago anymore. My husband lives in the UP; the first five of the last eight years I lived here full-time and he lived up north for work. The last three years I’ve been there with him. So I’m lonesome for [Roper and Lader]. Really lonesome for them; like I don’t have my limbs.
LADER: That’s how we all feel.
DEMEL: So trying to make music, going back and forth, or calling each other, or sending each other files—it’s hard.
LADER: But it’s sort of been this interesting test for us. In a way, it’s the perfect excuse for a twenty-five-year-old band to just say, “Enough.” But we haven’t done that.
ROPER: Our process of doing art has certainly changed. Early on there was a young, excitable accent to it, and now it’s more contemplative; more in your head, maybe. But I think the real interesting story here—if there is one—is that most bands don’t get to twenty-five years. And it’s because of ego—everybody wanting everyone else to buy into their concept of who they are. And somehow we’ve always been able to just have fun; and we’re good friends and we love each other and… it’s just a family affair.

Folk music tends to thrive in times of repression and rebellion. And we’ve definitely entered one of those. Are you anticipating a resurgence, and do you feel like you could be at the forefront of that?
ROPER: We’ve tried not to be overtly political in our careers. We feel like, if you’re doing good art—that’s all you need to do.
DEMEL: I would say I have been charged up in a way I didn’t want to be at my age. I didn’t want to be writing protest songs. I thought I could sit back on my laurels and write happy little songs about death, because I’m getting older. But now I’m not allowed. Because our job isn’t just to make good art, but to make good art that makes you feel and think, and be active and reactive, that has a purpose but isn’t too pedantic.


Well, art should be transformative…
DEMEL: There we go! That’s way better!

…The question is, do you choose what that transformation is ahead of time, or do you just offer it up and hope?
DEMEL: I found myself in a situation where I was being linear. And I said, “This is our job.” We have to write a song that makes those who follow folk music feel buoyed up, that they’re not alone in their struggles with the world as it is. And sure, we’re gonna be preaching to the choir. But you know, the choir gets hungry too. And they need lunch, and we’re giving it to them.
ROPER: We’re bringing a covered dish to every show.
LADER: We had this experience recently—right after the election, we were all depressed—everyone we know was depressed—and we did this show at St. Tim’s Coffeehouse up in Skokie. It was packed; it was the first time people had ventured out of their houses. And I looked out and I thought—I think we all did—“We have a job to do.” And we sang our songs—our same old regular songs, but with such passion and such intensity, that people were crying, they were laughing. They needed it. And so yes, that is our job.

“Song of Sons” is available through the usual channels, and on Sons of the Never Wrong’s website. The band plays a combined anniversary-CD release concert on October 29 at City Winery, 1200 West Randolph.