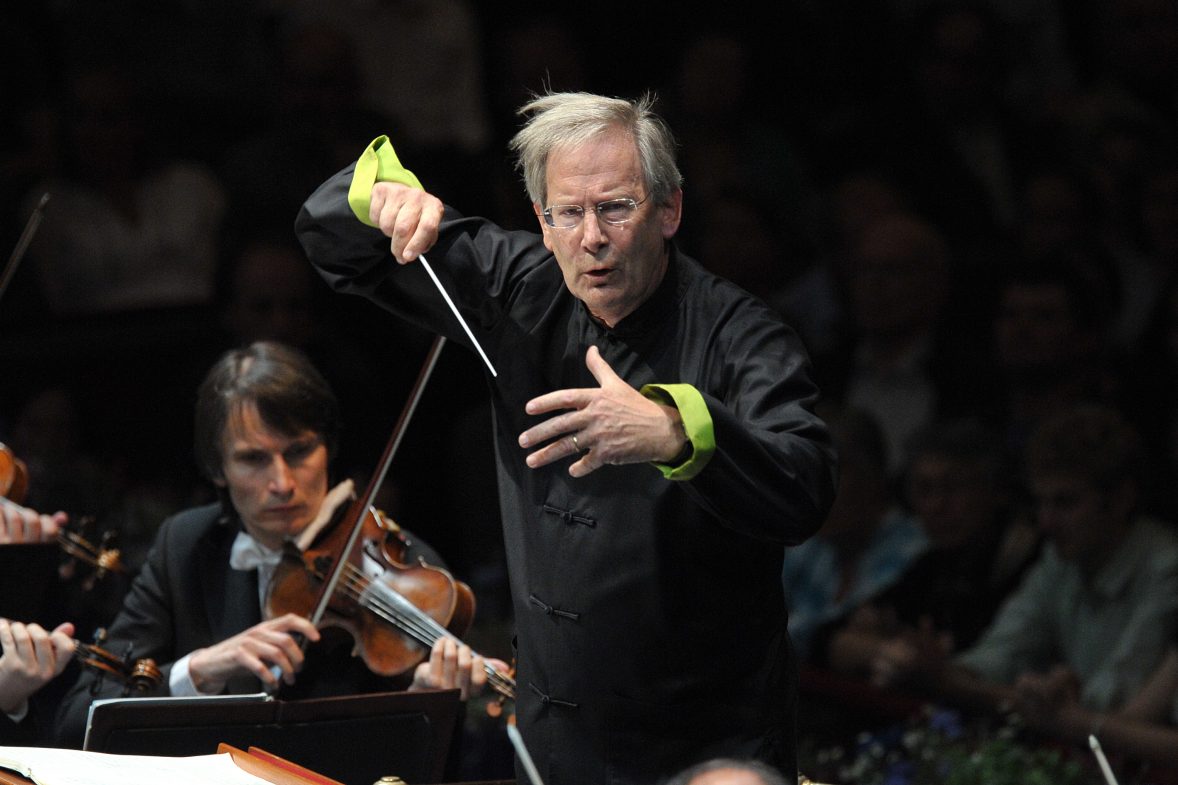 Celebrating milestone composer anniversaries is commonplace in the classical music world: centennials, bicentennials, births, deaths, occasionally a tercentenary. How then to commemorate a composer whose 450th anniversary is upon us?

Such is the case for Claudio Monteverdi. For Sir John Eliot Gardiner, the founder of both the UK-based Monteverdi Choir and the English Baroque Soloists, an extraordinary anniversary called for an extraordinary celebration: all three of Monteverdi’s surviving operas performed across a seven-month, fourteen-city tour across Europe and the United States. Only such a grand tour would be fitting for the man who Gardiner likes to call, “the Shakespeare of music.”

In a very real sense, the tour is as much a tribute to Gardiner, a pioneer in performing Monteverdi’s music at a time over half a century ago when Monteverdi was more a name relegated to music-history books than a composer whose music was widely performed and known outside of early music circles. Gardiner changed all of that.

“My approach to early music was developed basically as a reaction against the very bland, very cultured sound of the King’s College Chapel Choir in Cambridge,” Gardiner told me in 1989 prior to the Monteverdi Choir and English Baroque Soloists making their Chicago debut. “I was at King’s studying as a history scholar and was not a member of the chapel choir, but I used to hear them singing everything from Renaissance composers such as Thomas Tallis, William Byrd and Orlando Gibbons right up to Victorian English composers such as Parry and Stanford, all in a totally similar style. There was no concession to any kind of period idiom or style. This really got my wick and made me extremely irritated. It seemed to me that for all of that choir’s legendary culture, poise and perfection, it was really pseudo in some ways: it had no roots and was just skimming along the surface of the music.”

Gardiner decided to take matters into his own hands and start his own choir. “It was quite an audacious thing to do; I had absolutely no professional credentials for what I was doing—I was a history major! The challenge was to see if one could try and create an essentially earthy music—as Monteverdi’s music was—rooted to human and terrestrial experience with an incredibly direct and overt passion that is typical of Italian and Mediterranean music in general. That music was being performed in all beiges and grays: wishy-washy colors. What I was looking for was primary colors: strong and hot reds, blues and yellows, as it were, nothing blurred at all. That’s a characteristic of Italian language, after all. I wanted to see if one could produce those colors and sounds with English singers, rather than the dull sound we were all so used to.”

To accomplish this goal, Gardiner needed “to find very good musicians with limited vocal talent and expertise and stretch them in every possible way: stretch their musicianship, their historical awareness, their vocal range, and the vocal colors that they were capable of reproducing. That was my starting point for the Monteverdi Choir back in 1964 and those principles covered an entire range of repertoire from the seventeenth to the twentieth century. We strove to make the text comprehensible to the listener and take the music back to its country of origin as well as its sources, which were radical ideas for that time.”

No less radical was Gardiner’s founding of the English Baroque Soloists, who are also on the current Monteverdi tour: “It was baptism by fire, as far as the use of period instruments was concerned. They’re very precarious and can easily squeak, squawk and go wrong.” Gardiner had tried period instruments early on but noted that, “I got a lot further with a regular orchestra back then. I made very strong stylistic demands of them in terms of their sound production right up until 1977, when I sensed that there were potentially enough good period-instrument players to actually take the plunge and form the English Baroque Soloists.”

Chicago is one of two cities on the American leg of the current tour, the first of the stops before heading to Carnegie Hall. It was former Harris Theater president and general managing director Michael Tiknis who saw the importance of having “Monteverdi 450” as the Gardiner series is billed, come to Chicago, which will be the series’ North American debut.

But there is another Chicago connection, countertenor Kangmin Justin Kim, who plays Nerone (Emperor Nero) in “L‘incoronazione di Poppea” and Speranza in “L’Orfeo,” will be making a homecoming of sorts.

“I moved to Chicago when I was eleven when I moved here from Korea,” says Kim. “I was in junior high school in Palatine and I went to Northwestern University so I’ve been around the area for twelve years before I moved to England. Was it last season, or the season before? I did a little thing with Philip Kraus, he has the Handel Week Festival in Oak Park but besides that, I haven’t done anything professional in Chicago. To be able to do that with John Eliot is absolutely amazing. I’m very excited and scared, but more excited.” Kim’s parents, who still live in the area, will be in attendance as will his Northwestern friends.

How did Kim become involved with Gardiner? “I heard about the audition from my best friend Zachary Wilder, who is an amazing Baroque tenor and also part of this tour. He and I were doing a project in Germany and he let me know about this audition so I contacted my agent and because my agent had another client who worked with John Eliot a lot, my agent was able to get me an audition within two-and-a-half weeks. So I learned the role [Nerone], auditioned on Halloween 2015 and got the job on the spot.

“I cannot say anything but great things about John Eliot. There is a reason why he is revered as one of the most prolific conductors of his generation. He really understands music in a way that he is able to make the singers play and the instrumentalists sing. In a certain part he’ll say, ‘You’re not listening to the gamba,’ or, ‘We’ll give you a little more distance from the theorbo or the bass,’ so we are all doing equal parts. Because we’re always listening to each other and always encouraging each other, you learn about the other instruments and you become more of an instrument yourself as a singer. And the instrumentalists know the text better than most of us do, and they can always hum along and quote different parts of the show over drinks after the show. And we are all doing this together.

“The Monteverdi Choir and orchestra is John Eliot’s legacy, the way he works with that group, the way he conducts and these rehearsals are just absolutely incredible. Every rehearsal is like another audition. You have to be very, very focused and he doesn’t expect anything less than 120 percent or more, even during rehearsals. At every rehearsal, I see myself becoming a better and better musician, I really do.”

Since North America concludes the seven-month tour, Kim has had a chance to digest reactions to the three operas from across Europe, including in Venice, where Monteverdi spent the bulk of his musical life. “This is where all his operas were born,” says Kim. “They feel such ownership, we were doing two performances of each show, sixteen in a row, three shows back-to-back, which was kind of crazy.” Harris Theater is presenting one complete Monteverdi 450 cycle where each of the three works will be given a single performance.

“People tell me that the order of the shows, ‘Orfeo’ first, ‘Ulisse’ second and ‘Poppea’ last, really is transcendent on a very macro level. ‘Orfeo’ starts off with one idea of music and life and death, kind of three ideas mingling and it’s more abstract. And then ‘Ulisse’ becomes more of a myth and legend, something that is a little more graspable. And ‘Poppea,’ it could be today’s politics with forty-five. It is about people looking out for themselves and every single character in the show has an aspect that any person living in the twenty-first century can relate to, even smallish characters: protagonists, antagonists and all that. It’s an amazing show, it really is. It’s an ensemble show where every character is a leading character. I would be happy and honored to be able to sing Nerone at any state that the world is in, but the current relevance is startling.

“It’s very unsettling that it ends in a very intimate love duet because everybody knows that Nero kicks Poppea to death when she becomes pregnant so there’s that little story that everybody understood. The fact that Monteverdi ended ‘Poppea’ that way is more about finding truth and beauty within darkness, it’s kind of a yin yang idea. She is not able to find true love with Nerone and if you just talk about the intention of Monteverdi or why he ended his final opera like that, it could go on and on and on forever.

“But what we all can take away from this is that if you are able to find that kind of moment of calm and serene purity through music through the craziness of the world, at least that moment is very special. Just to be able to appreciate that is a joy and a gift. As a group, we also try to create this crazy story of political corruption and to really bring it down and just tell the audience that even among these crazy times, there are these pearls in the mud.”