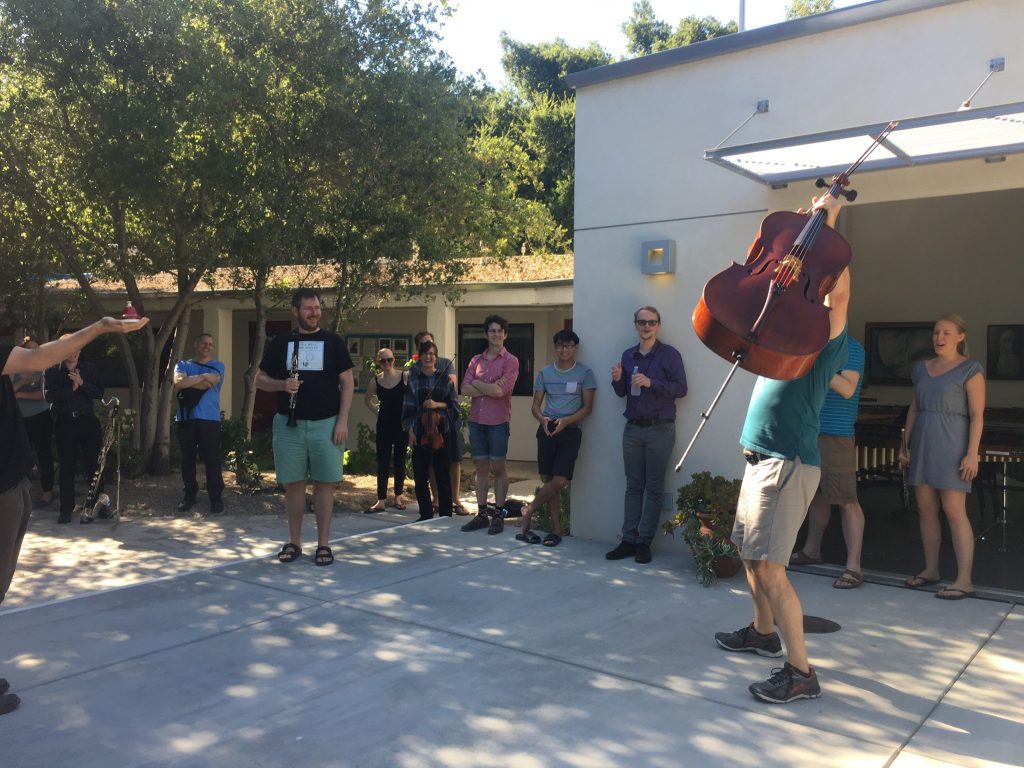 The folks who write classical music music are very often not the ones who play it. We composers rely heavily on learning to notate our musical ideas accurately so that music ensembles can bring them to life even if we can’t be in the room to answer questions, are not available to Skype or, in the case of many composers, have been dead for centuries.

But as amazing as the concept of notating sound is—and it is amazing—notated music still has its downsides. Notes on a page have an inherently sterile quality. Nothing feels stranger as a composer than playing a hot lick on the piano and then translating that musical energy into dispassionate black dots on a white page. You try to convey your idea by writing score directions above the notes like “with energy,” “bouncy” or “this is a hot lick, dammit!” but it’s not the same as just playing it would be.

Notated music also serves as a crutch, enabling the musicians to play the piece hundreds of times without ever memorizing it, which has created the enduring image of a classical music concert in which the musicians spend the whole time staring into their music stands. Lastly, notation has resulted in a focus on perfection. Musicians spend years interpreting the black dots on the page trying to find exactly what the composer wanted so they can play it unerringly night after night in concert, which is nice and all, but as you can imagine, doesn’t make for a stirring performance aesthetic.

Composer Erik Satie had fun with overzealous score interpretation. He delighted in writing things in his scores like “wonder about yourself,” “open your mind” and my personal favorite, “like a nightingale with a toothache.” It took a dozen or so academic treatises on how to play the piano like a nightingale with a toothache before people finally realized he was messing with them.

In the past, most classical music ensembles spent so much time interpreting music notation that they didn’t think about performance aesthetics. They took to the stage dressed in drab colors, said nothing to the audience, sat down, played for a while ,and then at some point stood up, took a bow and went home. They believed that they were only responsible for the notes on the page, that their job was to interpret the black dots as best they could and to dedicate themselves to a perfect performance.

But the times are changing. For many new ensembles, interpreting the score at a very high level is only one aspect of the performance, to be combined with an exciting stage presence. Possibly the ensemble most dedicated to bringing a groundbreaking new performance style to classical music is contemporary music chamber group Eighth Blackbird.

I first heard Eighth Blackbird many years ago while driving home from a gig and listening to WFMT’s Monday night live in-studio program. I heard this incredible performance of a piece by avant-garde composer George Crumb. When the announcer said that the ensemble had played the piece by memory I was flabbergasted. Playing by memory is common in a solo recital, but it’s very rare for chamber groups to do it, and with a complex contemporary music piece—well, it felt nothing less than miraculous.

Memorizing the music allowed Eighth Blackbird to sort of pretend that it was never notated in the first place, that it arose spontaneously from the group at the time of performance. It allowed them to inject more of themselves into the pieces they played and, most importantly, it freed them from the tyranny of the music stand. In concert, Eighth Blackbird is fun, playful, intense and deeply engaging. Freed from their stands, they prowl restlessly around the stage in tightly choreographed movements that accentuate the music.

The group has recorded numerous albums, three of which won Grammys; they had a high-profile, year-long residence at the MCA in 2016; they’ve collaborated with rock stars like Glenn Kotche and Bryce Dessner; and they’ve been more or less continually on tour for the last twenty years, in which time they’ve honed their stage presence to perfection. Last year they started a new initiative, Blackbird Creative Lab, to share what they’ve learned with other classical musicians in the hopes of radically and forever altering what a classical music performance looks like.

“Blackbird Creative Lab is the culmination and dissemination of the lessons we’ve learned after two decades as a touring new music ensemble and as an organization,” says Nicholas Photinos, Eighth Blackbird’s founding cellist. “Through this intensive two-week, tuition-free program for pre-professional instrumentalists and composers, we hope to inspire a new generation of musicians not only through side-by-side performances, but by working with choreographers, lighting engineers, and sound engineers, giving them the personal and organizational tools to succeed.”

Blackbird Creative Lab is truly ambitious. Not only do they work with budding young performers, but they have a place for emerging composers. Creative Lab results in new pieces, interesting new ideas for dynamic audience-centered performances and an ongoing conversation about how to rebrand classical music.

As a composer, this is exciting stuff for me. Of course we want the ensembles who play our music to be diligent in their interpretation of our music, but a group that can transcend the limits of notation to make the music their own and convey it to an audience in a consistently exciting way is a really powerful thing. And if it becomes a movement that transforms classical music? That would be an incredible thing.

Eighth Blackbird will present a Blackbird Creative Lab Reunion Concert at Constellation, 3111 North Western, January 21-22, featuring alumni from the inaugural workshops this year. More information can be found at the Lab’s website.