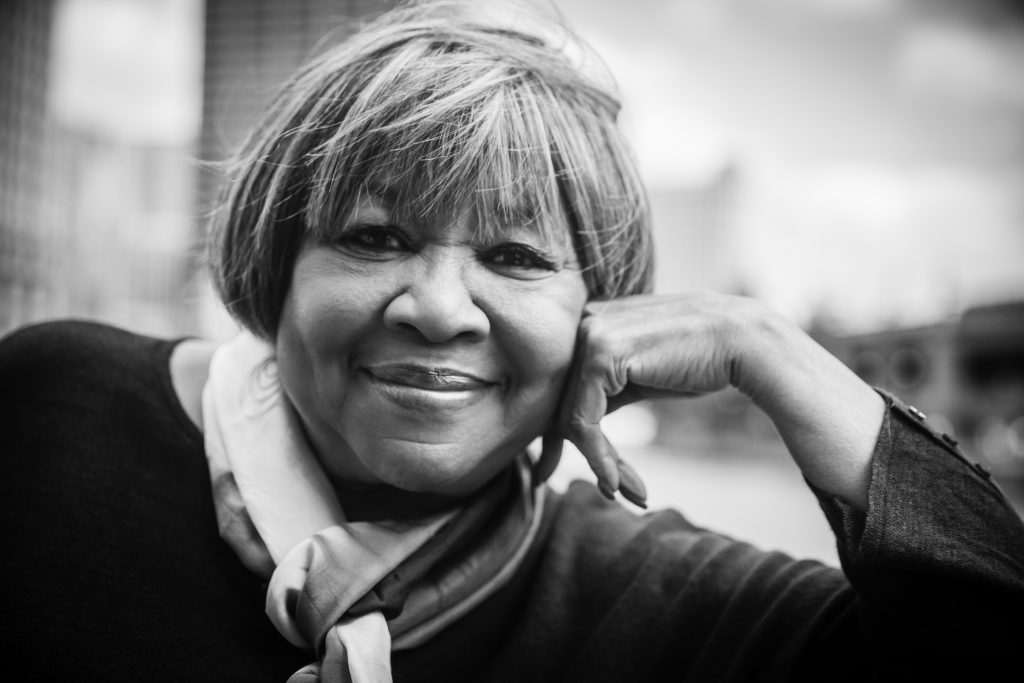 Black History Month is here again, but this year the struggle for African-American equality carries more resonance than ever, especially given the political environment led by a president (at press time) whose campaign slogan might as well have been Make America White Again.

But local legend Mavis Staples won’t have any of that negativity. As Chicago Tribune music critic Greg Kot wrote in his 2014 biography, “I’ll Take You There: Mavis Staples, The Staples Singers and The March Up Freedom’s Highway,” “She is an artist who grew up in church and on the civil rights battlefront, but she doesn’t finger-point, preach or prod. She leads with enthusiasm for the day ahead.”

That enthusiasm is palpable throughout Staples’ new record, “If All I Was Was Black” (ANTI- Records), even though all ten tracks were written by another local legend, Wilco’s Jeff Tweedy. This is their third collaboration, following 2010’s Grammy winner for Best Americana album, “You Are Not Alone” and the Grammy-nominated “One True Vine,” released in 2016, but it’s the first record penned almost entirely by Tweedy (Staples co-wrote three of the tracks), who tried to imagine the words Staples would want to sing and music that would sound good as performed by her band. If you weren’t familiar with their previous work together and only had a passing familiarity with Wilco’s music, you might foresee a recipe for disaster—a Converse-wearing, Generation X white hipster puts himself in the sensible-but-sequined stage flats of a seventy-eight-year-old black soul singer and comes off as a sycophantic carpetbagger. The fact that the record is a success from beginning to end is nothing short of miraculous, and a testament to Tweedy’s songwriting skills.

Indeed, Tweedy’s touch is so seamless that a listener would never know he had a hand in the recording, except to sensibly stay out of the way and let Staples’ soul singing be the star. Even when he duets with Staples on “Ain’t No Doubt About It,” her alto vocals are so deep and rich and his tenor so high and unaffected, it’s hard to tell the difference between the two, and that may be exactly the point. Their most successful and engaging partnership to date makes the case that there does not have to be division between races and generations. “We’re not loving one another the way we should,” Staples is quoted in the press release accompanying the album. “Some people are saying they want to make the world great again, but we never lost our greatness. We just strayed into division.”

It’s important to remember that not only did Jeff Tweedy’s songwriting acumen originate with the original 1980s-90s alt-country act Uncle Tupelo from downstate Belleville, Illinois (whose Southern soul allegiances ran so deep as to be reflected in their nomenclature and who ushered in the No Depression era), and improved across ten Wilco albums, but he and his band also worked on two albums of Woody Guthrie reinterpretations with Billy Bragg, titled “Mermaid Avenue” and “Mermaid Avenue Vol. II.” Tweedy is not some Johnny-Come-Marching-Home-Lately in his understanding of the roots of folk, and the same can be said for his respect for the gospel-infused old school rhythm-and-blues created on “If All I Was Was Black.”

The record begins with the slow, soulful, sultry, electric backwoods bounce of “Little Bit,” and while the lyrics admit that “this kind of tension” is “hard not to notice,” Staples admonishes listeners that they’ve “got to keep your eyes right on this long narrow road”—perhaps an allusion to the Staples Singers civil rights anthem “Freedom Highway”—and progress can be made, slowly but surely, bit by little bit.

The title cut and first single, co-written by Staples, makes the point that Staples is much more than just black. She’s also much more than a living legend, who began singing in church as the youngest of The Staples Singers, led by her father, Pops, a close friend of Dr. Martin Luther King, Jr., and who has since worked with Bob Dylan (who allegedly proposed marriage to her), Prince, M. Ward, The Band, Ray Charles, Nona Hendryx, George Jones, Natalie Merchant, Los Lobos, Dr. John, Delbert McClinton and most recently Gorillaz on their 2017 album, “Humanz.” More importantly, propelled by a fuzzy rhythm guitar part that bridges vibes of sixties and seventies “classic rock” via Curtis Mayfield, Staples has “all the love I give,” “natural gifts” and “perspective.”

“Who Told You That” is a screed against the received wisdom of complacency, whereas “Peaceful Dream” conveys hope for the future with rootsy gospel harmonies, acoustic guitar accompaniment, subtle organ accents and organic handclaps as its only percussion; and as the title implies it’s the most peaceful moment on the record.

“No Time for Crying” and “We Go High” are the other numbers co-written by the collaborators, and both espouse the philosophy of moving forward without despairing and taking the high road in the face of adversity; and although all of the tracks are inspired by real world events (such as Michelle Obama’s “When they go low, we go high” speech at the 2016 Democratic National Convention), none call out anyone by name. Tweedy says he didn’t include a list of gun violence victims, for example, because he knew he would have to leave someone out, and he wouldn’t feel right about drawing that line, deciding who merited inclusion and who didn’t.

The electric chug-chug of “Try Harder” marches further forward, soldiering on in the face of adversity; and a brief acoustic meditation closes the collection, showcasing Staples at her most raw and revelatory, with her range bordering on baritone, and as she sings, she’d “do it all over again.”

“If All I Was Was Black” is thematically and lyrically extraordinary, perfectly fitting for extending and fomenting a quiet yet passionate revolution toward racial equality without ever coming across as preachy or heavy-handed. Jeff Tweedy serves as Mavis Staples’ perfect channel to convey principles perhaps even she hadn’t been able to fully articulate on paper, despite this being her sixteenth solo album. It’s a testament to Tweedy’s musical sensibilities that the musical arrangements wisely break no new ground; the spare instrumentation and use of traditional blues and gospel tropes allow the musicians to get out of the way of Staples’ eloquent instrument, her passionate yet never histrionic voice of reason and love.

“Bring us all together as a people—that’s what I hope to do. You can’t stop me. You can’t break me. I’m too loving,” she says in the record’s press release. “These songs are going to change the world.” For all our sakes, I hope that’s the case. As she sings on “No Time For Crying,” “We’ve got work to do.”

“I’ll Take You There: Mavis Staples, The Staples Singers and The March Up Freedom’s Highway” by Greg Kot is part of The Chicago Public Library’s 2018 “One Book, One Chicago” reading program.