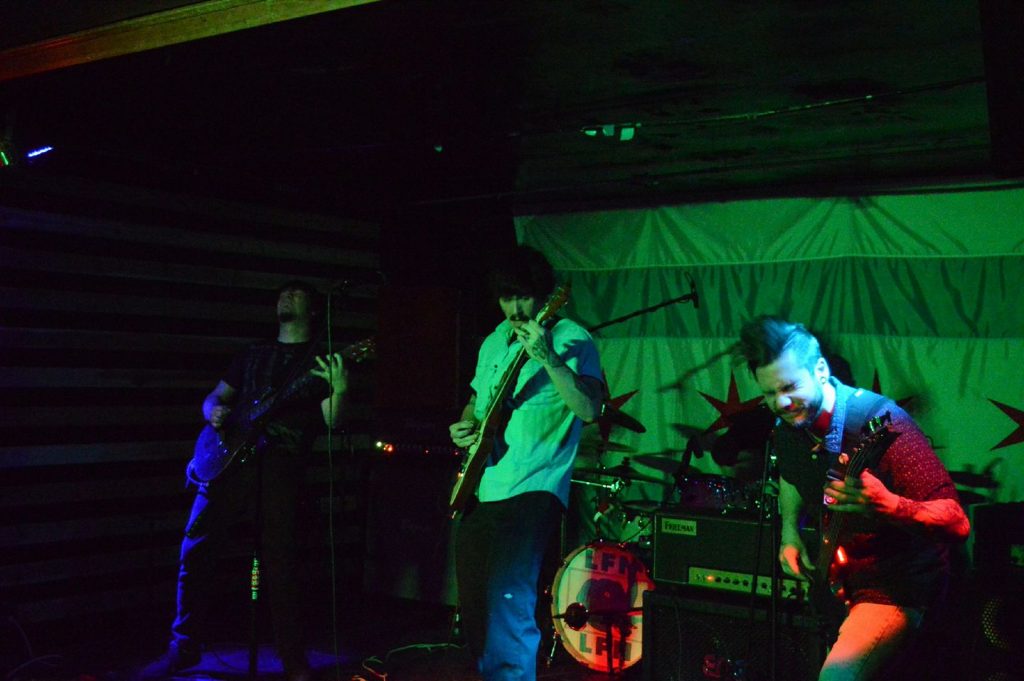 Am I getting too old to cover the local music scene? I like to think I’m hip, with it, finger on the pulse of all that is cool. But then I hear a group like Last Fantastic Nasty and I find myself thinking, “Kids these days…”

Last Fantastic Nasty came highly recommended by a photographer I met at another show. The group’s most recent claim to local-music-scene fame is the three-song “Throatmagic” EP. The songs are impeccably constructed metal-rock hybrids with well-executed shifts between loud and delicate sections. They’re tuneful enough to get stuck in your head, which is a shame, because the lyrics end up there, too, and they must be read to be believed. (For instance, the centerpiece of the EP, “Pheromona Lisa,” contains this gem: “What does it all mean? / Your face demands respect from me. / I see in you things I once thought I’d have, / so show me all the ways / to be a man, to understand / so blow me / and show me.” I backed up that section of the song at least three times and I swear that’s an accurate transcription.) I’m not against crudeness per se; in the past few years I even wrote a scene in a novel, involving an astronaut telling a dirty joke, that left my super-Catholic mother “mortified… absolutely mortified.” But as they say in “Spinal Tap,” there’s a line between clever and stupid, and to me that line’s drawn when you lose awareness of how your writing sounds to a disinterested observer.

Am I that observer? Is it just that I’m an old man? I remember getting turned on to the Rolling Stones in my late teens despite, and perhaps even because of the forbidden-fruit thrill of songs like “Brown Sugar” and “Stray Cat Blues.” And as bad as those lyrics sound to my human brain, they still work on a primal Monkey Man level. Or I give the crudeness a wink and a nod because of the coyness and artistry of the lyrics—the spoonfuls of brown sugar that make the nastiness go down. Whereas here, in the hands of songwriter-lead guitarist Ryan Graham, the nasty’s front and center, unadulterated, more honest in a way, but also more off-putting. (I messaged my photographer acquaintance on social media and asked “Is it just me, or are their lyrics a little crass?” To which he responded that they’ve been toning it down lately. Which—at least based on the additional songs Ryan sent me—may not be exactly true.)

Even given all that, I’m tempted to check out their show at Quenchers. They’re not that much younger than I am—a decade on average, it turns out—but I get the sense that they’re still in that “figuring who we are” phase, where you’ve realized you can get attention by shocking people, but you start thinking long and hard about whether or not you want to. And again, they do have the musical chops to do well: the songs are metallic and complicated and compelling, even if the lyrics feel like the last gasp of toxic masculinity in the #MeToo era. As to what they should do next, who knows? Should they tone down the nasty and trust that the fantastic is enough to get people’s attention? Or just go the time-honored way and figure out how to make the seediness alluring, rather than annoying? I have no idea. But if this band figures it out, they might still go places.