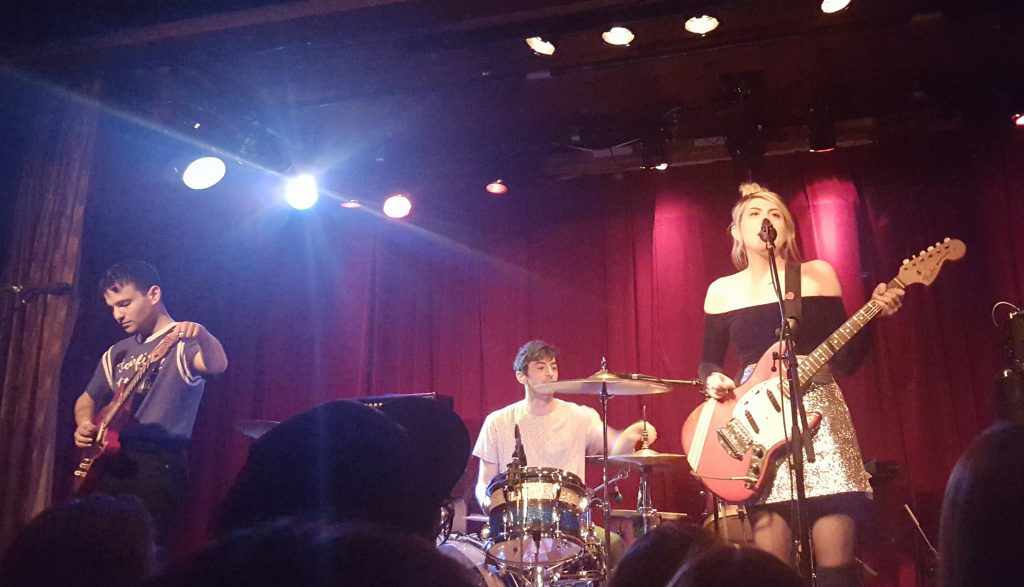 The nineties have been coming back, the rosy account of that decade’s prosperity and peace being preferable to our current hell-world. The aesthetics that defined millennial childhoods are popular again: bright colors, denim, gross-out cartoons, pixelated kitsch and, in music, pop-rock. Indie bands are going back to grunge, the sound that kicked off that decade, rock’s last heyday. In spite of stated anti-commercial ambitions, grunge gave the music industry the confidence to invest in a slew of guitar bands that saturated the airwaves with a generation’s worth of alternative rock, pop-punk and new metal. The crucial twist on this revival has been leadership from women-fronted bands.

“Women are making the best rock music today,” the New York Times proclaimed last September. There’s a movement to rehabilitate pop-rock and make space for the voices held at bay during the dude-y nineties-go-around. Charly Bliss is one of the bands charting out this new turf. The four-piece ensemble picks up guitar rock at the point of its grunge revival; chucks the aggression, the malaise, and the posturing around authenticity; and imbues the genre with a more generous, cathartic angst.

Last year, the band released its debut LP, “Guppy,” to acclaim. It’s an airtight half-hour of earworms and pumped-up production. The songs feel crafted, almost overwrought, and that’s because these tunes have been put through their paces. The story is, the band recorded the album twice: first as a scrappier indie-rock record, then two years later as a maximal pop statement attuned to the sound they’d honed on tour. They’ve edited their material into engulfing singalongs that thrill audiences at small clubs (like the Empty Bottle), but that wouldn’t be out of place on Top Forty radio.

Whereas rock has often given female vocalists license to sing “naturally” and without adornment, singer Eva Hendricks flips the program, welcoming pitch-correction technology with open vocal cords. Her instantly recognizable voice lands on each note with uncanny precision-— there’s no blues here. It’s a radical move, the same way it was radical when R&B and hip-hop artists started cranking up the Auto-Tune a decade ago. Charly Bliss doesn’t go for the same saturation effect, but the point is the same. Gestures like this flout the idea that sound processing should be imperceptible and that recordings should at least be “authentic” sounding. There’s no “authentic” performance to document and no flawless singer to immortalize.

“Guppy” is about transforming what’s uncool and flawed into jubilance. The album is compelling precisely because it is carefully constructed ear candy—not in spite of this fact. Lyrics like “All I eat is bread and cheese” and “I peed the trampoline” read on paper as duds, but on this record they’re solid hooks—weird, yes, but delightfully so—that open you up to more confessional content like, “I cry all the time, I think that it’s cool / I’m in touch with my feelings.” This isn’t a self-absorbed display of vulnerability, the way it often was for nineties post-grunge bands like Weezer. When Hendricks sings those lines you believe her: it really is cool to be in touch with one’s feelings.

Is nineties pop-rock revivalism a retreat into nostalgia? A refusal of the cult of innovation? Or maybe a way of adapting pre-existing modes for new subject matter? Likely it’s some combination of all of these. Of course, there are many canonical woman-fronted alternative bands from the grunge era who pushed the genre in directions it would not otherwise have gone: The Breeders, Veruca Salt, Hole, The Cranberries, No Doubt and Garbage come to mind. Charly Bliss and its peers have to contend with at least one important difference: a music industry that’s collapsed into the puddle of our hopeless economy. Charly Bliss is a band giving its all to win fans and recognition in a thankless and penniless world; maybe new opportunities will open up in their wake.