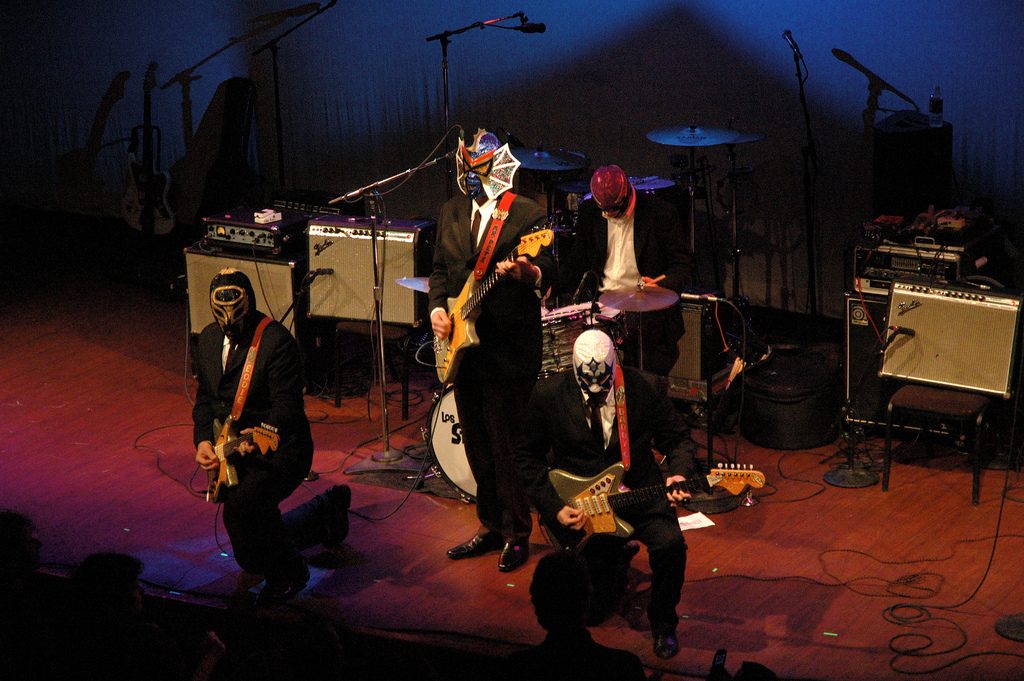 Nick Lowe first gained widespread notoriety in the late 1970s; his production work for important British artists (Elvis Costello, The Damned, Pretenders, Graham Parker), established him as a tastemaker. His releases—solo and with Rockpile—furthered his cachet. But Lowe had been working in music for many years; he was a member of 1960s pop group Kippington Lodge, then the bassist in Brinsley Schwarz. It was during his time with the latter that he wrote the 1974 classic “(What’s so Funny ‘Bout) Peace, Love and Understanding,” later a hit for Costello. Lowe would continue to release albums and tour; his style showcases a strong foundation in country and western and Americana, leavened with a knowing rock ‘n’ roll approach.

Nashville-based Los Straitjackets come from a very different place musically. The quartet features musicians in Mexican wrestling masks, playing high-energy instrumental rock. The group’s sound can loosely be termed surf rock, but that label is far too limiting to describe what Los Straitjackets do. The group’s live show features amusing choreography, matching guitars and delightfully fractured Spanish song introductions. The band writes a great deal of original material, but its reinventions of tunes from the catalogs of others are ace as well. Los Straitjackets’ deep understanding of American musical traditions makes the group’s music even more effective.

A combination of Lowe and Los Straitjackets makes all kinds of sense: while Lowe is a superb guitarist and a wry storyteller, his songs benefit from the powerful yet finessed backing of an ensemble like Los Straitjackets. Pairing with Lowe means that the masked foursome gets a rare opportunity to sing backing vocals, something at which they’re quite good but don’t do in their normal gigs. The band with Lowe out front breathes new life into classics like “Cruel to Be Kind,” “I Love the Sound of Breaking Glass” and “I Knew the Bride (When She Used to Rock ‘n’ Roll)” as well as relatively more recent, understated Lowe tunes like 2001’s “Lately I’ve Let Things Slide.” The electric backing of Los Straitjackets never overwhelms the lyrical subtlety of Nick Lowe’s tunes; the pairing seems natural and effortless.

Lowe and Los Straitjackets have been touring for several months now. This Chicago appearance is part of FitzGerald’s thirty-seventh American Music Festival. Their performance is on the fourth of the festival’s four non-consecutive days; other notable acts include the Joe Ely Band, Marcia Ball and Zydeco legend C.J. Chenier and the Red Hot Louisiana Band (tickets sold separately).