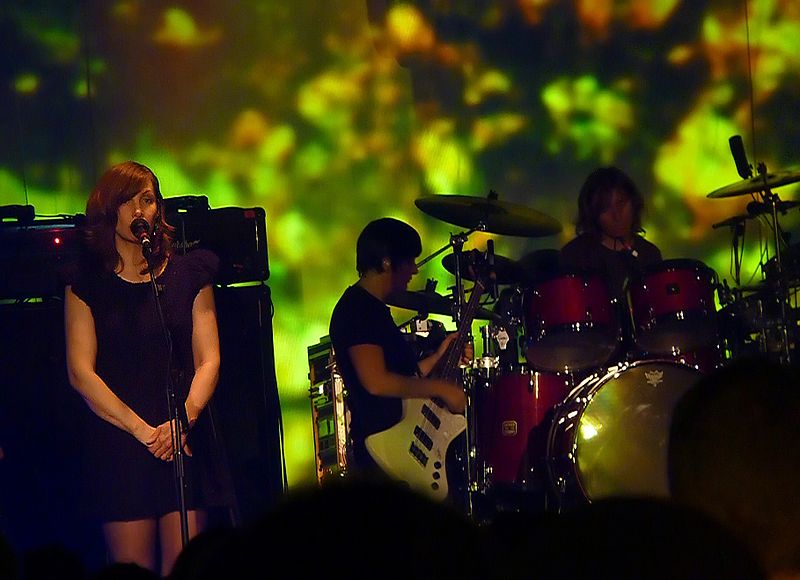 At press time, July appeared to be a cesspool of suckage for live music in Chicago, with a cavalcade of has-beens and also-rans parading through town, ameliorated only in part by a few strong street-fest headliners and the bright spot mid-month in the form of a relatively diverse Pitchfork lineup. Then My Bloody Valentine announced they were coming to challenge the strength of the city of big shoulders with two shows at the Riv at the end of the month.

It was June 1992, and as a music director for WVKC, the college-radio voice of Knox College in Galesburg, Illinois, I was attending the New Music Seminar in New York City with one of my colleagues. We were at The Ritz on West 54th and saw the ramshackle pride of Stockton, California, Pavement, at ten o’clock, North Carolina’s boisterous Superchunk at eleven and London’s My Bloody Valentine (via Ireland) went on at midnight. In retrospect, that’s a pretty good triple bill (hint: understatement), but MBV was the highlight. Touring behind their now-classic “Loveless” album, which was met with critical accolades and college radio adoration but popular indifference stateside, the band pummeled the packed, sweaty crowd with sonic ferocity.

Twenty-six years later, I don’t remember a lot about that performance, but I recall, during the climax of their early single and normal show-closer “You Made Me Realise,” an extended instrumental interlude when the quartet seemed to vamp on the same note for close to half an hour. Many in the audience, including my music department colleague, walked out holding their ears, but I was laughing hysterically throughout. Perhaps it was the absurdity of the situation, a “Waiting For Godot” moment, or perhaps it was knowing that my hearing would never be the same after that night or, more likely, the band had hypnotized me into a Zen trance with their walls of guitars and squalls of echoing feedback.

Only later would I learn that the band referred to this moment of their live performance as the “Holocaust” (which seems very un-politically correct now), and this would be the highest-volume level of a ridiculously loud concert performance, usually played at about 130 decibels, akin to the volume of a military jet engine just before it takes off from an aircraft carrier, if you were standing fifty feet away. There’s a reason the folks directing those planes wear big noise-cancelling headphones over their ears, believe me. Leader, guitarist, primary composer and all-around auteur of the MBV sound Kevin Shields would later say that this moment of their shows “was so loud it was like sensory deprivation. We just liked the fact that we could see a change in the audience at a certain point,” and, indeed, they seemed to enjoy challenging their audience to see how much of this assault they could endure.

My Bloody Valentine began as a darkwave combo in 1983, embracing black eyeliner and gothic impulses and inspired by Nick Cave’s The Birthday Party more than anything else. Shields, who was born of Irish parents but originally grew up in Queens, New York before his family moved to Dublin in the hopes of finding a better life, had met and befriended drummer Colm Ó Cíosóig in 1978. After lineup changes in their early days, the foursome was finalized with bassist Debbie Googe in 1985 and singer and guitarist Bilinda Butcher in 1987; both are English. On the Lazy Records collection of the “Strawberry Wine” single and “Ecstasy” EP, there are early hints of what the MBV sound would become. The foursome generally sounds like a more obscure version of The Byrds or The Mamas and Papas, although a more contemporary analogy would be to think of them as also-rans in the vein of bands on the NME C86 compilation. Alan McGee, head of the Creation Records label, had thought of them as a bad version of The Pastels, until they opened for his band Biff Bang Pow! at the beginning of 1988 and they “absolutely destroyed the place,” he recalls in his 2013 autobiography. He signed them to his label immediately.

With their first proper full-length, 1988’s “Isn’t Anything,” the band sashayed through twelve winsome numbers of pure pop joy and darkness; the record is like listening to The Jesus and Mary Chain’s “Darklands” or “Psychocandy,” but played backwards, and with male and female vocals buried so deep in the mix behind wavering guitars so as to make them virtually unintelligible. There are also moments of what would come to be the hallmark of Kevin Shields’ trademark guitar sound, heavy on the tremolo, which he played in such a way that the guitar would go in and out of tune deliberately during a song. Their debut long-player had cost seven thousand pounds to make and was recorded in six weeks.

Their second proper album would take over three years, would cost over 250,000 pounds and require sixteen different recording engineers, given Shields’ studio perfectionism, of which they used twenty-one to record the follow-up. Label head McGee claimed they spent six weeks in one studio in 1989 just recording drums, that 248 nights in 1990 and 1991 were spent recording (Shields liked to work only at night, another factor that caused him to burn through engineers), and that he had to borrow money from his father, money from his deceased mother’s life insurance policy, to keep the recording sessions going.

The “Glider” and “Tremolo” EPs, released in April 1990 and February 1991, respectively, hinted at the greatness that was to come—none other than the dean of American rock critics, Robert Christgau described tracks from “Glider” as the “reliable rhythm of a giant linoleum buffer systematically rubbing the skin off your soul.” These compositions and those that would make up the rest of “Loveless,” released in November 1991, would rely heavily on what Shields would call his “glide guitar” technique: he customized the tremolo system by extending the tremolo arm and loosening it, allowing him to manipulate the arm while strumming chords, creating what Rolling Stone called “a strange warping effect that makes the music wander in and out of focus.”

“Loveless” was and is an unqualified masterpiece, still the apex of the band, even considering their 2013 follow-up “m b v.” I had the pleasure of seeing them play The Aragon on that tour, even after being warned by a date (being between wives at the time) that the band’s live show had a reputation to melt your bone marrow. The Valentines brought their own sound system with them on that tour, which successfully countered the horrible echo chamber. That’s still the only concert I’ve been to where they were distributing free earplugs to all attendees—those who turned them down were met with derision by the security staff. I recall one of them saying to another, “I’d wear these if I were them,” and just like those folks that steer the military jets to take off and land on aircraft carriers, they know what they’re talking about. My son and I will be at Friday night’s show; I bought tickets, but only on the condition that he promised to protect his ears. How we’ll protect our bone marrow, and how we’ll keep the walls of the Riv from collapsing, might be additional concerns, but, like the music of My Bloody Valentine, some things are out of our control.